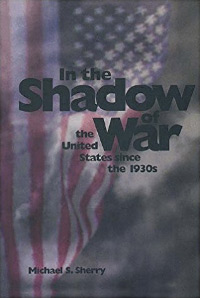 In the Shadow of War
The United States Since the 1930s
Michael S. Sherry
Hardcover Paperback
This book review appeared in the Winter 1996/97 issue of The Independent Review.

In his new book, In the Shadow of War, Michael S. Sherry describes and explains the process of militarization that has fundamentally transformed American life since the 1930s. He explores the myriad ways in which war has shaped—indeed, distorted—American politics, economics, foreign policy, culture, and social relations. The voluminous and growing literature has needed this synthesis for some time, and Sherry’s book will serve as a benchmark for future scholarly inquiry, refinement, and comparison.

Sherry argues that a half-century of anxiety about the nation’s safety has brought about comprehensive qualitative change, which he attributes to a broad but unique historical process he calls militarization. He is critical of that change, but his sentiments are mixed. For instance, while decrying the militarization of policymaking and economic activity, he supports some social liberation spin-offs such as feminism and gay rights, although he would prefer that social progress had been accomplished in the name of “justice” rather than national security (p. 154). His critique of militarization ranges widely but, oddly, he reserves righteous anger for the ugly hypermasculinity that accompanies a few of its social aspects. Sherry’s preferences and prejudices in this regard signal a central difficulty, which is that the historical process he names, and hence his critique of the changes attributed to it, includes too much.

For instance, Sherry strains to link the Tailhook episode to post-Gulf War machismo (p. 478). Detailed “connections between patriotism and sexual aggression” (p. 352) verge on psychobabble. The attempt to link relaxed immigration quotas to “the crisis of militarization” (pp. 154, 428–29; chap. 5) demonstrates how operative definitions become meaningless when framed too broadly. Militarization in such expansive form turns into both sides of nearly every coin. At one point, Sherry actually asserts that “everything that defines a nation...became annexed to this historical process” (p. 499). It may be easier to prove a thesis when all phenomena are embraced by it, but the reader is left bewildered. Still, notwithstanding definitional overreach, Sherry weaves many important observations into an impressive narrative.

Sherry recounts how society organized itself for the production of violence, then shows how the ends—total war, victory—became consuming. Militarization affected the broadest areas of American life, even the nation’s memories, models, and metaphors. (The Civil War and World War I had already infused a furtiveness into the American mind.) When Franklin Roosevelt invoked war as a metaphor for the Great Depression and a model for achieving recovery, he called on a selective collective memory of national unity in 1917–18. He would attack the economic crisis with the disciplined “army of our people” as if we had been “invaded by...foreign foe” (p. 15).

Henceforth, war ceased to be an episodic event in American fact and fiction. Depression merged into World War II then into Cold War. Fictional wars became staple against poverty, illicit drug use, disease, and so forth, while “national security” grew to become a broad, continuous defense of the nation on a global scale against sustained, sometimes unseen, and shifting threats. From FDR to Clinton, Americans have found it difficult to mount effective federal efforts to deal with national problems unless the efforts are justified by war or war’s surrogate. (A classic statement is William Leuchtenburg, “The New Deal and the Analogue of War,” in Change and Continuity in Twentieth-Century America, edited by J. Braeman and others. Columbus: Ohio State University Press, 1964.)

Readers may find Sherry’s “stages” of militarization problematic. So-called “consolidation” of the process during the Korean conflict and domestic Red Scare is straightforward and understandable. The years from 1953 to 1961, which Sherry describes as an “uneasy balance,” seem aptly named, and “crisis” from 1961 to 1966 intuitively registers in most people’s minds. (However, 1968 may be more justified than 1966, and Sherry admits the demarcations are necessarily fuzzy.) He goes off the deep end, though, in connecting the counterculture with militarization. To link the two, much less to subordinate one to the other, he would have to start his story before 1933—as far back as 1920 and, perhaps, as far back as the 1890s and the crisis of Victorianism. To have done so, however, would have undermined his claims for the uniqueness, much less the all-inclusiveness, of the militarization starting in 1933.

The stage “war mentality in triumph, 1966–74,” calls forth much Nixon bashing. Naturally, Watergate had “compelling links to the history of war and militarization,” too (p. 331). The “back to the future” stage, 1975–81, is interesting for its discussion of clashing cultures: resurgent patriotic culture with its calls for “moral and military rearmament” versus a regalvanized antiwar and antinuclear movement (p. 350). Sherry also offers insightful commentary on the declining economic benefits of militarization (p. 389).

The “illusory remilitarization” stage, 1981–88, gives Sherry an opportunity to offer every conceivable explanation, except the obvious one, for why Ronald Reagan presided over the end of the Cold War. Reagan, we are told, had nothing to do with release of the Iranian hostages, much less the dumb luck it took to win the Cold War. Any achievement on his part regarding the Cold War was “largely an illusion” (p. 391). The Iran-Contra scandal was fortunate, as it prompted Reagan to embrace the Intermediate Nuclear Force Treaty. The Soviets under Gorbachev’s exquisite leadership deserve the credit because Reagan nearly spoiled the deal by insisting on his silly Strategic Defense Initiative (pp. 411–13).

Despite Sherry’s obvious biases, he makes a fascinating case that militarization differed during the 1980s. It turned increasingly inward, in search of new enemies and an artificially heightened national unity (pp. 392, 430). Again, one wonders whether militarization—rather than, say, nationalism—is the culprit, as one can easily find similar examples before 1933. Sherry’s post-1988 stage is the last, very tentative one. He details an apparent “farewell” to militarization, as well as lingering aspects of it. He also links today’s “culture war” to the litany of other fictional wars, but he finds this one particularly disconcerting, if mercurial and uncertain at the present juncture (p. 497).

Throughout Sherry’s treatment of militarization, one of his most intriguing arguments is that something more than external threats activated (and activates) America’s anxiety and the attendant process of militarization. He probably underrates the genuine military threats to American security and vital interests during the Cold War, but the point is well taken. The American form of militarization depended on our unique political culture. Americans’ actions and attitudes in the “shadow” of war reflected our own values and ambitions as much as they reflected threats from abroad.

Americans played the armchair warrior, anxious about outcome and piqued by a sense of danger, all the while remaining relatively safe and comfortable. Venerable American ideals and pursuits of profit, equality, and moral perfection all entered in, even if yoked to the demands of war. Militarization, however defined, probably stemmed in part from what Seymour Martin Lipset has called “the dark side of American exceptionalism” (American Exceptionalism: A Double-Edged Sword. New York: Norton, 1996, p. 267). Still, the “yoking” made the period from 1933 to the aftermath of the Cold War what it was. To that extent, Sherry successfully conveys the character of a unique historical era, if not a process, that witnessed qualitative changes in American society, economy, politics, diplomacy, and culture.

From Franklin Roosevelt’s perspective, war would bring about elusive economic recovery. Moreover, a deeper logic would blend the New Deal’s “internal preparedness” strategy into the military preparedness effort justified by international conflict. War would become the most important means of legitimizing the activist and coercive role the state assumed at home (pp. 31–32). Indeed, most Americans probably felt they had no more control over their government in the winter of 1941 than they had over the German Blitzkrieg or the global crisis (p. 63). Much of what we routinely attribute to the Cold War alone was thus forged in the 1930s, including the institutional connections of a powerful military establishment and the civilian executive leadership. Roosevelt essentially waged cold war against the Axis powers before Pearl Harbor. Ironically, cold-war mentality preceded the Cold War (pp. 45, 88).

In fact, American and German forces fired on each other in naval tit-for-tat for months before the date that lives in infamy. Historian Charles Beard, though supportive of Lend-Lease objectives, rightly observed that it was nothing short of a legislative means to wage undeclared war—this a long time before the “conflicts” entered under United Nations auspices or the Gulf of Tonkin Resolution. Even public angst was high before Pearl Harbor, which helps to explain the unprecedented panic on the West Coast after the Japanese attack on Hawaii. Coupled with racial antipathies, the angst led to the reprehensible detention of Japanese alien residents and American citizens of Japanese ancestry. Although Sherry faults Roosevelt for much of the emergence and triumph of militarization in America, he never explicitly links FDR to what he terms America’s “concentration camps.” Moreover, Sherry gives Roosevelt unsubstantiated credit for having “facilitated” America’s productive and inventive achievements during the war years.

World War II reinforced a lasting business-government partnership in the name of national security. Because most people experienced relative prosperity during the war years, that partnership entailed some supposed validation of Keynesian economic principles, particularly the use of fiscal policy to promote prosperity into the future. So far as the rationale for public works projects is concerned, nonnuclear wars are nearly ideal, and the Cold War was nothing if not a great pump-primer (pp. 75, 136). Sherry makes no mention of the recent challenge to the orthodox view of the economic effects of World War II (Robert Higgs, “Wartime Prosperity? A Reassessment of the U.S. Economy in the 1940s,” Journal of Economic History 52 [March 1992]: 41–60).

Of course, World War II also caused a great deal of social change, much admittedly positive for minority groups. Moreover, this change was less transitory than similar changes produced by other wars, because post-1945 militarization sustained the change and promoted its continuation. Referring simultaneously to the reality of Jim Crow at home and the requisites of world power and image abroad on the eve of the Cold War, FDR emphasized that the nation could “no longer afford to indulge such prejudice.” One can only speculate about the extent to which this new federal imperative would metamorphose into a full-blown counterculture. In any event, from the GI Bill to various other forms of “social engineering,” the federal government’s immersion in social welfare and social change became the key force in social relations following World War II (p. 109). This role had no precedent and may even have altered the historically cyclical nature of American society and politics (p. 99). Although it may not fully account for feminism, gay rights, and hypermasculinity, it accounts for a great deal.