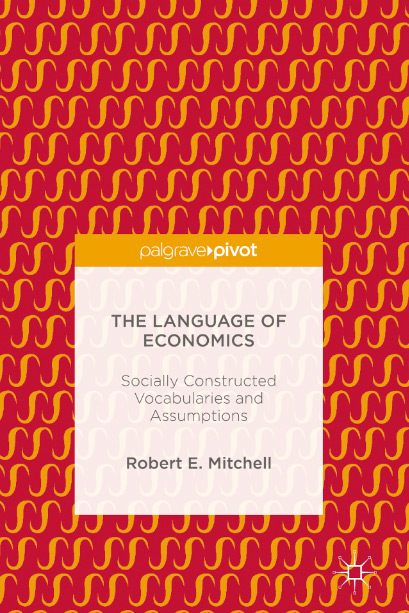 The Language of Economics
Socially Constructed Vocabularies and Assumptions
By Robert E. Mitchell
Kindle Hardcover Paperback
This book review is a web exclusive for the Spring 2017 issue of The Independent Review.

Robert Mitchell argues that economists “are prisoners of their own vocabularies. The language of economics directs members of the discipline to what to study and how to think” (p. xi). He warns that although “learning a discipline’s ... language” is essential for “one’s career trajectory,” students and professionals inevitably “Swallow, accept, memorize, and move on.” But beware: “What you swallow ... might be poison” (p. 2). In fact, the very language of economics and the mental models constructed from them have poisoned the field because “We are taught how to think about certain issues (e.g. national wealth) to the exclusion of others (e.g. the distribution of wealth)” (p. 39). Fortunately, as almost anyone who is trained in economics can verify, these statements miss the mark—as do many of the important premises of this volume. Economists aren’t forced to simply swallow, accept, memorize and move on—and only a few lazy ones actually do.

At the core of Mitchell’s argument is the assertion that economists (like those in other fields) are not just “prisoners,” but “puppets” and “slaves” to their language because, he asserts, “free will is ... fiction” (p. 56). He’s especially irked by two metaphors used by economists—the idea of rational economic man and the concept of the invisible hand—which, he argues have led economists to become “apologists” for inequality because they see it as “natural” rather than as the product of policy decisions. Ironically, he ends up documenting fierce, healthy debates among economists about almost everything—including methodology and policy.

Mitchell accuses economists of constructing “imaginary economies,” which he characterizes as “Alice-in-Wonderland” worlds that have little relation to how actual economies work. He expresses displeasure that economists “are mired in metaphors” (p. 48)—forgetting that he himself uses metaphors good and hard. Altogether he uses the “Alice-in-Wonderland” metaphor a dozen times. It turns out that humans have a hard time not using metaphors—we reason in terms of metaphors. And the Alice-in-Wonderland characterization of standard economic models is particularly inapt because Wonderland is a place of irrationality where the usual rules of logic don’t apply, while standard economic models are damned by Mitchell for assuming that people are, in fact, rational. Why belittle economic models as “imaginary economies”? It appears that the idea is to make textbook economic models seem something like unicorns or a fire-breathing dragons—obviously fanciful, absurd and out-of-touch—rather than attempts (sometimes insightful but sometimes not) to simplify the complexity of the world just the right amount so that the order hidden in the clutter can be better grasped.

Mitchell is especially critical of “ideologically-driven” think tanks and castigates the Cato Institute, Heritage Foundation, and American Enterprise Institute (AEI), which don’t search for truth and understanding but promote “ideological myths and supposed truths” (p. 23). He contrasts them with what he asserts are objective, “independent and more centrist ... policy centers” such as Brookings, but omits mention of the existence of think tanks that would self-identify as left-of-center. If you do think that people are clones or lack free will you might be right to censure think tanks, which would probably be useless. But real people aren’t clones, possess free will and work out their views of the world and of the best policies by weighing and sifting competing ideas. A few weeks before the 2016 presidential election my department hosted an issues debate between representatives of the dreaded right-leaning AEI and the left-leaning Center on Budget and Policy Priorities. The discussion was completely civil, students learned a lot, and colleagues from other departments congratulated the panel as a thoughtful model for providing the public with concrete information and policy options—rather than “ideological myths and supposed truths.” Think tanks are vital to our democracy.

Mitchell’s book raises a lot of questions. But the questions he asks often have obvious answers that will elude someone who thinks that there’s only one way to think and that someone should be put in charge to remake the world from the top down. For example, he asks “if all economists use the same economics-speak, facts, and numbers, why are there differences in how inequality is understood and explained?” (p. 19). One answer is that they don’t all use the same concepts, facts and numbers. Information, as Hayek reminds us, is scattered and everyone knows some things that others don’t. But even if we did use the same information, we’d still reach different conclusions because we’re all unique—our judgments about the validity of theories and information vary and we differ in our moral values. Related question: “Who has the say on what are the facts?” (p. 47). Answer: Everybody gets a say, because everyone knows something that others don’t. And the question that seems to irk him the most: “why does wealth play such a central role in economics?” (p. 53). Answer: Because most people don’t like being poor and want to know how to escape poverty. But, I agree with Mitchell that it’s important to examine inequality too—which is why the next issue of The Independent Review will be devoted mainly to this subject.

Ultimately, Mitchell’s primary thesis—that “instead of (moral) statistics on health, education, individual well-being, and the distribution of national wealth,” economists insist on a “focus on aggregate economic numbers” (p. 70) whose flaws they are loathe to recognize—substantially misses the mark. The economists that I read (such as those who publish in The Independent Review) are quick to point out the strengths and weaknesses of statistics like GDP (I spend an entire class period in my Introduction to Economics class doing this) to complement them by examining other statistics that help us understand the well-being of society (I spend another class period doing this) and to examine differences within the population (I spend a third class exploring inequality). The economics profession, it turns out, is immensely omnivorous—pouring massive amounts of time into investigating a boundless range of topics, not just how to maximize GDP, which few (if any) really see as an interesting proposition. Mitchell’s charges don’t stick.

Still, sometimes it’s fun to read books like this—where the author tries to take on an entire profession, goes off on rambling tangents and settles a lot of scores. It’s probably even more fun to write one, although I hope that I never will.