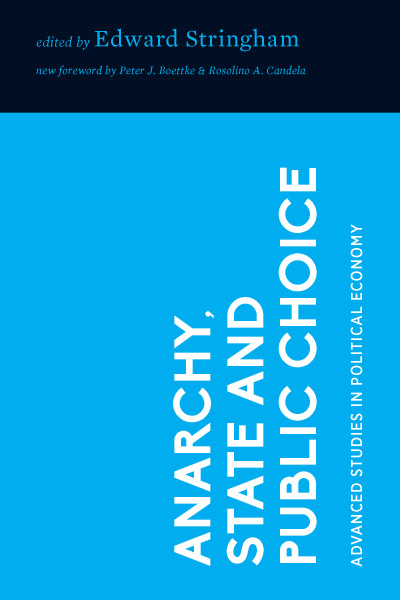 Anarchy, State, and Public Choice
Edited by Edward Stringham
Hardcover Paperback
This book review appeared in the Spring 2008 issue of The Independent Review.

Winston Bush’s article leads off. In his model of anarchy (seen as a completely opportunistic jungle), there is no production. Two stateless individuals battle over their daily manna, the cost being their efforts. With no cooperation, they reach a first-stage equilibrium in which each expends effort in taking from the other and defending what he has. Cooperation allows a second-stage Pareto-superior equilibrium to be reached. Jason Osborne extends Bush’s model to a case in which the actors pay an enforcement agency to reduce the effectiveness of their mutual theft. If the two individuals are identical, they are better off without the enforcement agency. If they differ, they may be better off or worse off. Osborne then examines a prisoner’s dilemma model with signaling, a form of cooperation. Introducing an external enforcement agent into this model, one finds that the individuals again may be better or worse off. Osborne correctly points out that these findings are limited by the exogeneity or lack of utility function of the enforcement agency. The exogenous enforcement agency is cooperation by another name. In all of these models, the actors have incentives to find their way out of the jungle through one form of cooperation or another.

Gordon Tulloch views the state as an equilibrium outcome. He outlines broadly how states arise from the Hobbesian jungle and how they operate. The stronger do not eliminate the weaker. Trade and property arise in the scenario of the war of all against all when the weaker either can inﬂict enough pain on the stronger or have something to trade. However, substantial wealth accumulation is limited if wealth is vulnerable to theft. A state is the strongest group that gains control of a region. It gains power by force and by acting as an exogenous enforcer that forestalls too much theft and protects property so as to extract more than it could get by merely taking. It holds power by familiar disciplinary and monitoring means. Christopher Coyne points out that the market order is also an equilibrium. It arises from the Hobbesian jungle by several means. The cleverest persons (entrepreneurs) gain by supplying the wants, including protection, of the weaker. The weaker band together and develop customary law. Markets and trade arise without the state acting as enforcer. Literature documenting the rise and prevalence of the market order without the state and in antagonism to the state provides a muchneeded balance against the prevalent view that the state is the only means of escaping the Hobbesian jungle. Future work might explore the uneasy equilibrium between these two realms, including the state’s cooptation of established entrepreneurs, who are pitted against new entrepreneurial entrants.

J. Patrick Gunning believes that the state emerges because it enables gains from trade by acting as a necessarily coercive enforcer of contracts for nonrecurring transactions. Peter T. Leeson notes that many transactions are privately enforced by reputation and by actors who refuse to deal with contract violators; game theory evidence supports this fact. I add that the market has numerous other means to handle fidelity to large-scale contracts, including performance bonds, monitoring, insurance, joint venture, joint management, clearing houses, and vertical integration. Leeson observes that most contractual-type exchanges are in fact recurring, even if not with the same persons, owing to communication and reputation. Substantial evidence also points to both noncoercive and coercive third-party means of enforcement.

James Buchanan posits unequal income in the jungle of all-against-all war, followed by agreement (or law) that improves the position of both the richer and the poorer. He then suggests that when the de facto income-producing abilities change, but the de jure law does not, the state modifies existing law in the name of “justice.” Benjamin Powell addresses both this claim and Buchanan’s larger work The Limits of Liberty (Indianapolis: Liberty Fund, 1975), particularly on the grounds that Buchanan has not carried over the assumption of opportunistic behavior in his own public-choice theories to the case of the government’s acting as a neutral third-party enforcer in the prisoner’s dilemma game.

Thomas Hogarty presents “three cases of anarchy”: confined rodents that have been separated from their packs; the children depicted in William Golding’s novel Lord of the Flies (New York: Capricorn, 1959); and Andersonville prison. Virgil Storr argues that none of these cases has experimental conditions that correspond to those advocated by the likes of Murray Rothbard and Hans-Hermann Hoppe. The examples, he points out, are chaotic situations without the customary law that real societies generate. The issue is one of defining anarchy.

Warren J. Samuels extracts the basic goals and means of anarchism from its major figures and relates them to issues of power, externalities, and opportunity sets interpreted in terms of coercive effects. He extensively critiques Rothbard’s book For A New Liberty: The Libertarian Manifesto (San Francisco: Fox and Wilkes, 1973), claim-ing that Rothbard favors aristocratic conservatism and bypasses the really serious anarchism issues. After reviewing Samuels’s theory of power, Scott Beaulier deals with several salient issues in defense of Rothbard’s anarchocapitalism, including Samuels’s reduction of all choice to power and his apparent Nirvana fallacy of comparing any anarchist world to impossible, ideal standards. Beaulier does not deal with all of Samuels’s issues in the article published here, perhaps because he has done so elsewhere.

Buchanan and Tulloch offer up their reﬂections after thirty years. Buchanan, taking the rebels of the 1960s as his model of anarchists, has no brief for anarchism. Unconcerned about the U.S. Leviathan and its role in fostering terrorism, he calls for research on fighting terrorism. Tulloch, who does not favor anarchy, defines it as “a state of violence and confusion.” He favors local government. He emphasizes the governmental roles in the military, roads, and local property regulations, and lists his complaints about anarchy. In response, Jeffrey Rogers Hummel seems to enjoy providing detailed, pointed, and thought-provoking replies to each of Tulloch’s concerns.

The volume concludes with Peter Boettke’s article on anarchism as a research program. Covering the years from 1974 to the present, Boettke reviews a great deal of research relevant to anarchism.

Overall, the book covers a broad range of anarchy topics with a variety of approaches. I give the book a grade of B, based on its clarity, convenience, and interest. Although it contains no seminal work, it brings together much of the early work, along with up-to-date responses that reﬂect further study during the intervening years and the much better knowledge that the current generation of researchers has of both the history of anarchism and the conceptual issues involved. It introduces enough material to the uninitiated at an accessible level to stimulate interest in this important subject. My main disappointment was that there was not even more in the book. Perhaps in the future, we will see a book of readings in anarchism that includes some of the referenced working papers. Herschel I. Grossman and others have published several worthy papers on anarchy, and a related literature on the development of property rights warrants consideration.

Serious academic work on anarchism is relatively sparse. Anarchy, State, and Public Choice is a sign of life. A new generation of academic researchers is once again attacking questions of anarchism. I look forward to seeing someday a volume filled with all original studies in the theory and history of anarchism. There are numerous areas waiting to be rigorously researched, and I can think of no more important subject.