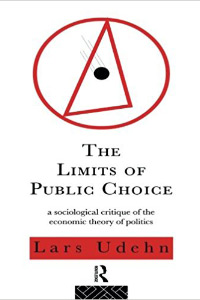 The Limits of Public Choice
A Sociological Critique of the Economic Theory of Politics
Lars Udehn
Kindle Hardcover Paperback
This book review appeared in the Spring 1997 issue of The Independent Review.

The time is right for a book exploring the limits of public choice. The field has grown enormously in personnel, domain, and influence. From humble origins as a small scholarly discussion group in Virginia, the Public Choice Society has expanded to include hundreds of researchers in North America, and counterpart societies have emerged in Europe and Japan. Those familiar with the range of topics researched under the inclusive rubric of public choice know full well that economic imperialism has been hard at work. And none can doubt that the entire field gained professional stature with the awarding of the Nobel Prize in Economic Science to James M. Buchanan a decade ago. Having fully ripened, the field now calls out for a thoughtful pause to consider the limits of its domain. In the movie Magnum Force, “Dirty Harry” Callahan warns: “A man’s got to know his limitations.” So, too, do researchers in public choice.

Although the time is right for a book exploring the limits of public choice, practitioners may find that Lars Udehn’s is not the right book for them. As its subtitle suggests, it is written from a decidedly sociological viewpoint, the author being a sociologist affiliated with the University of Uppsala. Critics of public choice looking for an erudite discussion of the limitations of economic methodological orthodoxy argued from a sociological perspective that scorns economic imperialism will no doubt find this book much to their liking. Public choice disciples seeking honestly to consider the limits of economics generally and public choice specifically will probably find this work thought provoking and somewhat unsettling. Ultimately, as a practicing economist, I was left longing for a book that explores the limits of public choice from the inside—that is, one fashioned by a fellow economist. More on this point later.

Udehn begins by calling attention to traditional political science as a field devoted primarily to description and much in need of theoretical guidance: “a discipline with a topic, but no particular approach” (p. 1). Clearly, for Udehn, economics plays a crucial role in illuminating some political phenomena, but so do the sister disciplines of psychology and sociology:

My quarrel is with those who make exaggerated claims concerning the universality and explanatory power of economic theory. The argument of this book is not that public choice is bad, but that there are definite limits to the economic approach to politics; that there are certain phenomena it is not well equipped to deal with, and some phenomena it cannot handle at all. (p. 9)

Udehn writes for an audience of social scientists, taking care to make the book accessible to those in all branches of social science. He does not intend to undertake an ideological critique; instead, he wishes to focus on empirical and theoretical issues. The field known as public choice is considered broadly so as to include more than simply the Virginia School originators of the term. The inclusiveness, for example, allows Udehn at one fascinating juncture to dish out special derision to the late George Stigler of the Chicago School of political economy for an alleged gross misreading or misleading representation of Adam Smith on self-interest. Throughout the volume Udehn pulls no punches: his is no dispassionate tome.

Udehn has given a logical structure to his book. Preliminary observations concerning scope, approach, and organization appear in the Introduction. Chapter 1 provides an overview of the economic and sociological perspectives on politics, reviewing noteworthy contributions to the respective literatures. Udehn invokes Buchanan’s characterization of the methodology of public choice, which consists of three elements, namely, self-interest motivation, politics as exchange, and methodological individualism, discussed in turn in chapters 2 to 4. In chapter 5 Udehn considers the economic perspective on collective action, in chapter 6 the sociological. Chapter 7 offers conclusions.

Udehn takes issue with the assumption of self-interest in politics, which lies at the core of orthodox public choice methodology. His thesis holds that political man acts with regard to both group interests and the public interest in ways that deny solely selfish motivation. Udehn does note the more recent tendency to treat the self-interest axiom broadly enough to include even altruism, but he dismisses the broader interpretation as vacuous. His charge, then, is primarily lodged against an orthodox public choice in which, without apology, self-interest is equated with selfishness.

Udehn alerts readers to empirical shortcomings stemming from the selfishness assumption. He considers a range of evidence concerning the behavior of politicians, bureaucrats, and voters. His empirical evaluation and conclusion strike me as contentious when he writes: “Thirty years’ testing of the public choice assumption that people vote their pocketbook has resulted in a great mass of disconfirming evidence, and little, if anything, in the way of confirmation” (pp. 85–86). Yet, earlier, he remarks about politicians: “there can be little doubt that incumbent politicians occasionally do try to ‘buy’ votes...in a variety of ways [such as]...pork barrel legislation, popular tax cuts, direct transfers and, above all, promises, immediately before elections” (p. 69). It is hard for me to understand why politicians so behave if people do not vote their pocketbooks.

An economist writing on the methodology of public choice might have argued that one requires only a sufficient tendency toward rational, self-interested behavior among some political actors at the margin in order for one to ascribe economic causes to politics. Udehn misses this point or minimizes its relevance when he writes: “The point I wish to make is that some use of economic policy to increase the probability of re-election does not prove that politicians are all selfish. It only proves that they are human, perhaps all too human” (p. 69). An orthodox economist writing on methodology could acknowledge difficulties resulting from the axiom of self-interest, but would maintain the axiom nevertheless (either unflinchingly or with a wink) because to do otherwise would be tantamount to abandoning the economic approach. Preserving orthodoxy, however, is not Udehn’s mission. He has come instead to highlight the need for a sociology of politics alongside public choice.

Udehn is correct that the task of explaining manifestations of altruism poses a special challenge to economists. Perhaps economists can develop better ways of dealing with other-regarding behavior, such as the fresh approach taken in Robert H. Frank’s “What Price the High Moral Ground?” (Southern Economic Journal 63 [July 1996]: 1–17). Alternatively, and to Udehn’s liking, economists could more humbly admit that some phenomena are better explained by other social sciences. As one who has never felt that economics provides an especially good explanation of, say, why audiences only sometimes give standing ovations, I have no problem with this alternative. Only the most doctrinaire economist would disagree.

Udehn sees politics as exchange, but not just that. He faults economists for carrying the baggage of stable preferences too far, to the exclusion of understanding politics as persuasion: if preferences are given, then the political forum is devoid of economic content and much of politics lies outside the realm of economics. Similarly, Udehn sees power and authority as integral to political life, yet outside the bounds of economics: authority presupposes organization, and organizational behavior has long resided in the domain of sociology; moreover, legitimate authority induces a norm of obedience to rules, hardly the kind of behavior that lends itself to rational-choice analysis.

By now I hope I have conveyed fairly the flavor of Udehn’s work. The author has made a serious attempt to learn the literature of public choice, and his book deserves to be treated seriously. He has articulated well the sociologist’s complaint against imperialist economics. Although that sociological perspective allows Udehn to see clearly some limitations of public choice that would be perhaps less than obvious to economists, it nonetheless clouds his view in the very area fundamental to appreciating fully public choice and its imperialist designs: being a sociologist, Udehn does not think like an economist about markets.

At various points in his book Udehn conveys the sense that economics can successfully explain market behavior because in the market lives selfish economic man. Social norms are such that selfishness is accepted in the market (p. 193). Public choice fails or is severely limited, however, because political man can be so much more than merely selfish; he can be socialized to care about his group interest and the public interest, too (p. 60). Udehn believes that market relations are at times exploitative and coercive, as with the power of capital over labor (p. 156) or men over women (pp. 156–57). He is concerned that the public choice movement has been about more market and less democracy (p. 188), especially as the movement has accompanied the rise of the New Right in politics, a deplorable development in Udehn’s opinion (p. 8).

In contrast to Udehn’s view of market incentives as base and incapable of developing the whole person (a questionable point in my opinion, but one not pursued here), consider instead the viewpoint typical of economists. Most economists (of the public choice stripe) revel in the self-regulating and social-harmonizing attributes of markets, attributes that transcend the character of the participants. It is quite natural for such economists to advocate political institutions that will work in some sense independent of the personal character (or lack thereof) of political actors. If you were to tell such an economist a story based on Udehn’s view that someone is exploiting another in the market, you would have merely invited that economist to think more deeply about the relationship and rewrite the story. The economist’s tale of the marketplace is in the end one of seduction, not coercion.

If economists in the public choice movement wish to encourage a larger role for markets, I submit they do so because they have studied extensively human behavior in the context of markets and are enamored of the consequences in a way few sociologists are. Fine art is necessarily less appreciated by the untrained eye. Economists, by virtue of their understanding of human action in markets, do indeed have privileged insights into nonmarket behavior. These insights have limitations, however, so Udehn has done those social scientists interested in politics a favor by carefully and systematically reviewing the limits of public choice—as he sees them. Still, when a sociologist mentions, for instance, a norm of rule following in an organization characterized by legitimate authority, this economist cannot help wondering who captures the appropriable quasi-rents in that implicit market. For better or worse, both economists and sociologists tend to be discipline bound.