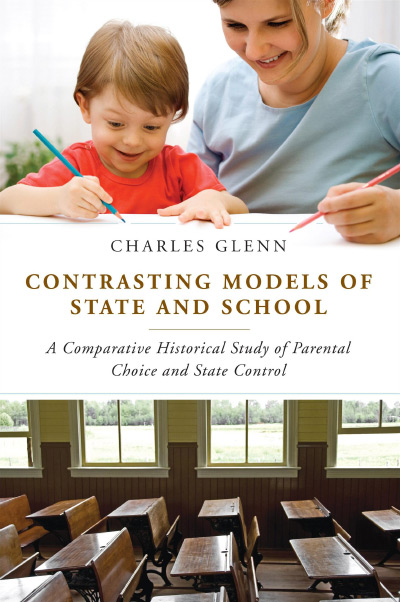 Should education be a tool that states use to create national homogeneity by reducing cultural and religious dissension among citizens? Or should education be a tool that individuals and groups use to educate their children how they see fit, even if it means cultural heterogeneity? Should curricular and pedagogical decisions be made on the national level, or should they be left to localities and cultural groups? Charles L. Glenn’s Contrasting Models of State and School is a comprehensive history> of how four different nations—Austria, Prussia/Germany, Belgium, and the Netherlands—have answered these questions. The Germanic nations Prussia and Austria have historically favored a strong state-run education system, whereas Belgium and the Netherlands have leaned toward policies of educational decentralization, giving individuals and groups significant educational choice.

This book elaborates on and furthers some of Glenn’s previous research, most notably The Myth of the Common School (Amherst: University of Massachusetts Press, 1988). There, Glenn traces the development of the idea of the common school (the idea that everyone should receive roughly the same kind of education, administered or heavily regulated by the state) to Jacobin France and the nineteenth-century United States. The recent book, then, explores historically how the idea of the common school found form in the German countries of Austria and Prussia but did not gain as much traction in the Netherlands or Belgium.

The book’s story begins largely at the turn of the nineteenth century, when all four nations, in differing ways and for differing reasons, were struggling to foster their own national identities, and education policy would be used as a means toward that end. By 1800, Austria’s commissioner of education had already decreed certain standardization measures to govern Austria’s church-sponsored and private schools and had declared school attendance (at state-approved schools) to be mandatory. Invigorated by the German nationalism of Johann Gottleib Fichte, the Prussian government established a national Ministry of Education, several teacher-training seminaries, and national oversight of curricular content by the year 1817. Although the accrual of state power over education was slower and experienced more opposition in the Netherlands and Belgium, both of these nations also erected models of state oversight of schools. These efforts were motivated largely by a desire to reduce the diversity of approaches to schooling that were thought to hinder a nation’s cohesion. Referencing Austrian and Prussian educational reforms in particular, Glenn notes that “[t]he popular school of the nineteenth century was above all an instrument of emerging nationalism, reflecting the Romantic concern with national unity based upon cultural uniformity and requiring the engagement of peasants and workers as loyal participants in that project. It was during this period that linguistic unity and thus the suppression of countless local dialects, became an urgent project for the theorists of nationalism and thus a mission of the school” (p. 40).

Using schools to create any kind of national homogeneity is bound to run up against objections from the religious. If education cannot be value neutral, and if many religious groups regard education without religious instruction as inadequate, can states really provide (or regulate) education in a way that will satisfy diverse religious groups? Glenn offers us a fascinating glimpse at how these four nations have negotiated this issue. In the 1830s and 1840s, for instance, the Netherlands attempted to include a generalized Protestantism in their emerging public schools (in a way very similar to the Protestantism being put into New England’s public schools in the same decades). In 1850, Belgium’s Liberal government passed a law (over strong Catholic opposition) whereby secondary schools “would include religious instruction given by or in consultation with the clergy, but schools would be under control of the government” (p. 76). A similar trend of compromise positions—public schools that allowed varying degrees of religious instruction whose content varied with the locality—occurred in the German nations (which formed a unified German confederation in 1848). Although religious opposition in Belgium and the Netherlands was strong enough to check the Liberal and Socialist trends of secularization (and hence government-imposed standardization of instruction), the religious opposition in Germany gradually weakened over time, making governmental control of education easier. By 1871, for instance, government control of German education had “extended over the appointment and dismissal of teachers in these schools, and this was used to purge them of teachers—especially members of religious orders—who were not considered loyal to German rule” (p. 105).

Glenn spends a great deal of time going over the totalitarian school system set up by Germany’s Nazi Party in the 1930s and 1940s. In 1938, the German government passed a law creating a fully nationalized and centralized education system. Confessional religious schooling was abolished, and a system of national governmentally administered schools was ushered in. The new system was selective and hierarchal, wherein the government sent the most promising youth to government-run boarding schools whose intent was to mold future Nazi leaders. Glenn notes that education under the Nazi regime was fiercely anti-intellectual and more concerned with creating loyalty to the Nazi ideology and regime than in educating in traditional subjects. As he writes of this period, “[T]he extension of direct and exclusive state control in education was an important element of the Nazi program of radical centralization and imposed uniformity, in which everything possible was done to eliminate competing sources of opinion and independent thinking” (p. 164).

Although the Western occupying powers did away with all hints of the Nazi educational model in post–WorldWar II Germany, they replaced it with a model close to the American model of interdenominational schools with little religious instruction, which many Germans still found objectionable. A gradual secularization of the German populace over the next decades, however, meant less demand for religious confessional schools, thus allowing the state to play an increasingly large role in German education. Today, Glenn writes, “although educational freedom is explicitly granted by the German Constitution, its actual exercise has been hedged about with restrictions to such an extent that there is not the rich diversity of educational offerings that might be expected” (p. 181).

This experience contrasts with that of Belgium, where Liberals, Catholics, and Socialists—none commanding a large majority—found it necessary to make compromises on education policy, often meaning a strong system of public education with state subsidization of private-school tuition. In 1988, the Belgian Constitution was amended to federalize the public-education system, allowing local linguistic communities authority over their own public schools and retaining freedom of educational choice (at state expense) for families. Emphasis on decentralized education and freedom of choice have likewise remained strong in the Netherlands, where the “[C]onstitution and laws give parents the right to insist upon education consistent with their own convictions—whether through establishment of a new school if numbers justify that or through transportation to a school at some distance” (p. 203).

Contrasting Models of State and School is a highly informative work of history, rich in historical detail regarding the educational policies of four distinct nations. A fair amount of European historical knowledge is necessary to truly make sense of the history Glenn tells. For instance, he touches on but does not go into much detail over how events such as the Napoleonic wars, World War II, and the struggle for a unified Germany affected each country’s choices on educational policy; the reader must connect some of those dots on his or her own. Although I believe that such explanations would have made for a more contextualized and richer historical account, it also would have made for a significantly longer book.

Glenn does an excellent job recounting the education policy histories of these four nations, but Contrasting Models of State and School is relatively short on analysis and discussion. What should readers take away from these four histories? What lessons are to be found in them that we can and should use when discussing education policy in our own countries? Glenn should not be faulted for this shortcoming; as a historian, his concern is more with laying out the history and letting readers form their own conclusions. Yet readers who want analysis or commentary on the history will be slightly disappointed.

History has the remarkable power to show us that what currently is has a long backstory, and understanding that backstory adds immensely to the understanding of the way policy currently looks. Charles Glenn has done those of us concerned with education policy a service by telling the often contrasting histories that led four nations to take different paths to educating their citizens in the midst of religious and cultural diversity. (Interested readers should also read Glenn’s subsequent book, The American Model of State and School [New York: Continuum, 2012], where he gives the history of American educational policy and its similar struggles.) Anyone concerned with issues of educational policy, the current trends in American education toward increasing centralization, and school choice will come away from this book with a deeper appreciation of the hows and whys of educational centralization and school choice.