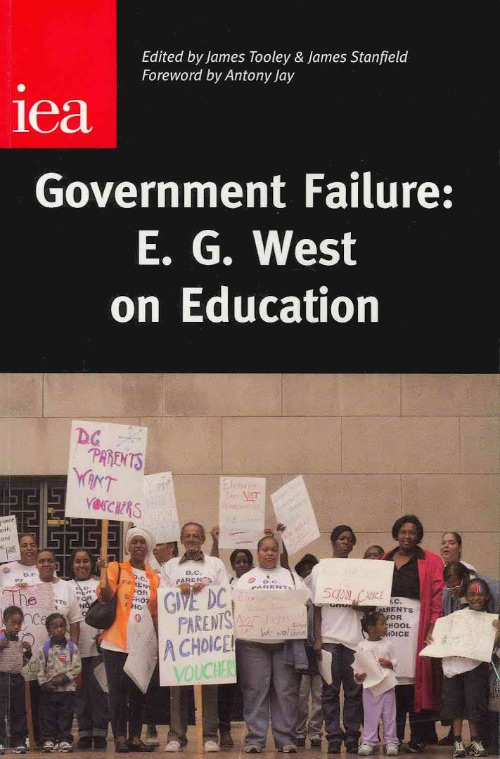 This attractive little book provides an excellent means of introducing any reasonably independent thinker concerned about education to the work of Edwin West. The modern realities of compulsory public schooling are becoming too obvious for all but its blindest adherents to ignore, and marginal alternatives such as charter schools, vouchers, and home schooling are chipping away at the monolith. Parents and other genuinely concerned adults have been driven, often against their strongest beliefs, to skepticism about public schooling. Still, they properly want to know, What is the alternative?

Government Failure is a collection of nine of West’s essays, spanning 1965 to 2000 (the year before he died), with a brief foreword by Sir Antony Jay, a useful introduction by coeditor James Tooley, and, as an epilogue, the script of an amusing episode of the BBC series Yes Prime Minister titled “The National Education Service.” Readers of this review almost surely already know more about West than the typical frustrated parent mentioned earlier, but in his introduction Tooley explains why this book should appeal to both groups: its essays were either unpublished previously or, for other reasons difficult to obtain, are relatively nontechnical (lacking the statistics and mathematics found in West’s academic works), and consciously avoid duplication of the specific material in West’s best-known books Education and the State: A Study in Political Economy, 3d ed. (Indianapolis, Ind.: Liberty Fund, 1994), and Education and the Industrial Revolution, 2d ed. (Indianapolis, Ind.: Liberty Fund, 2001). Tooley and Stanfield have limited the book’s scope to West’s work on primary and secondary education.

E. G. West is well known as a historian of economics, so it is not surprising to find that three short essays here pertain to the history of ideas, dealing with Charles Dickens’s unfortunate generalization about private schools from an unrepresentative sample; the problems John Stuart Mill had in reconciling utilitarianism with his respect for liberty (the educational views of William Godwin, who did not share Mill’s confusion, provide a refreshing counterpoint in this essay); and Thomas Paine’s advocacy of a voucher plan for public schooling. In number of pages, these three essays constitute less than one-fourth of the book. The other six essays in the collection deal with the history and theory of education and compulsion from several perspectives. As with any collection of essays on the same theme published or presented at different times and places, there is some repetition. The scholarly reader should welcome the repetition as reinforcement.

For the first essay in the collection, Tooley and Stanfield wisely chose a 1996 exposition of what is probably West’s best-known point: history reveals that education in Great Britain and the United States (specifically, in New York, which West considered representative) was almost universal before schooling was either “free” or compulsory. So powerful is this essay, so rife with provocative implications for the reader described early in this review, that the rest of Government Failure seems almost like gilding the lily. Education is different from schooling? Schooling is different from public schooling? Public schooling is different from tax-financed “free” public schooling? Imagine! Who would have thought? Again, these ideas are not novel ones to the typical Independent Review reader, but they will be to the rapidly growing number of parents and voters disaffected with today’s public schools. This essay contains plenty of data, such as the arresting statistic that by 1840, well before compulsory school attendance, the literacy rate in the northern United States was 97 percent. The good old days usually leave much to be desired, but anyone who works with young people today would welcome a return to this degree of facility with the three Rs.

In the essay after those discussing Dickens and Mill, West turns to a nearly number-free economic analysis of compulsion. Beginning with the sensible thesis that education is a normal good and that schooling is often an efficient means to it, he notes that in a period of rapidly rising incomes, parents would and did voluntarily demand more schooling. For this reason and others, he criticizes the empirical claim that British school attendance was positively affected by compulsion: the claim simply violates too many ceteris paribus conditions, confounding correlation with causality. A delightful public-choice analysis follows, complete with bureaucratic incentives and interest-group politics, as well as a brief note on (and rejection of) the thesis that because compulsion has positive externalities, Paretian welfare economics lends support to it. Describing the English parents of 1861, a Newcastle Commission survey concluded that their “sentiment of independence is strong, and it is wounded by the offer of an absolutely gratuitous education” (qtd. on p. 107). Yet rent seeking is a powerful motive, and a few years later parents were so wounded.

Crime, whose reduction is one of those supposed positive externalities, draws West’s scholarship in the next essay. He recounts the nature and weaknesses of the early-nineteenth-century utilitarians’ case that compulsory schooling would reduce crime, and he follows with modern data that actually suggest the contrary. Private schools, in contrast, for several reasons grounded in their very nature, do seem to have this crime-reducing effect. One bemusing finding: although academic competition (more common in private schools) seems to reduce school violence, public education is increasingly emphasizing “cooperation over competition.” Any modern professor continually pressured to rely on team projects and group presentations, and rewarded for doing so, understands.

A thoughtful public-choice essay follows, complete with a median-voter analysis and a study of school-related unions and their political influence, and then comes West’s brief sketch of Paine’s voucher plan. The penultimate essay in Government Failure is a survey of the theory and practice of vouchers. Among the advantages West perceives in “funds follow the child” vouchers is their “progressive” effect. Higher-income parents can and do pay house prices that capture the value of superior local schools, so vouchers actually have greater relative benefit to the less wealthy consumers of schooling. West includes an informative table comparing four attributes of nineteen different voucher programs (two in the United States, four in Canada, and thirteen in as many other countries), highlighting Milwaukee’s program for special focus. Among the contentions he considers late in this essay is the belief that private schools promote private values (skills promoting one’s self-interest), whereas public schools promote public values (generosity, citizenship, charity, respect, sense of community, and so forth). On this contrast, West’s rebuttal (essentially that the contrast is too sharply drawn) is not as pointed as it might have been. We teachers see every day the harmful consequences of educational bureaucracies’ demands that diversity and community be substituted for traditionally individualistic intellectual skills. This essay includes a brief sketch of libertarians’ concern (Sheldon Richman and Gary North are cited) that vouchers spell control, but West clearly sides with Milton Friedman’s position that they are a step in the right direction.

The collection concludes with a punchy, short, counterfactual history that hypothesizes a post-1870 (Forster Act) British “education without the state.” “It is unfortunate,” West concludes, “that this market was destroyed by the combined action of politicians, bureaucrats and rent-seekers, action that not only reduced the potential quality of education but also imposed on citizens enormous financial burdens, especially in the deadweight costs of taxation” (p. 191). This extended quote is offered as evidence of West’s powerful prose and his pull-no-punches style; it conveys the strength of the other essays in Government Failure as well.

The book will not satisfy everyone. There is no mention of home schooling, perhaps the most serious emerging challenge to compulsory public-school attendance, and almost none of charter schools, which some would suggest are not much of a move from traditional public schools anyway. Libertarians are prudently suspicious of governments’ powers of taxation to fund “follow the child” vouchers; West cites Sheldon Richman as this view’s “most articulate and influential spokesman” (p. 174). For a lively set of interchanges between West and many critics, including Murray Rothbard and Milton Friedman, see E. G. West, Nonpublic School Aid (Lexington, Ky.: D. C. Heath and Company, 1976). To some knowledgeable and strongly committed scholars, such disagreements will be overpowering. Most readers, though, including the intelligent layman who is fervently looking for something better than our public schools, will conclude that Tooley and Stanfield have made a valuable contribution to the subject with this posthumous tribute to E. G. West.