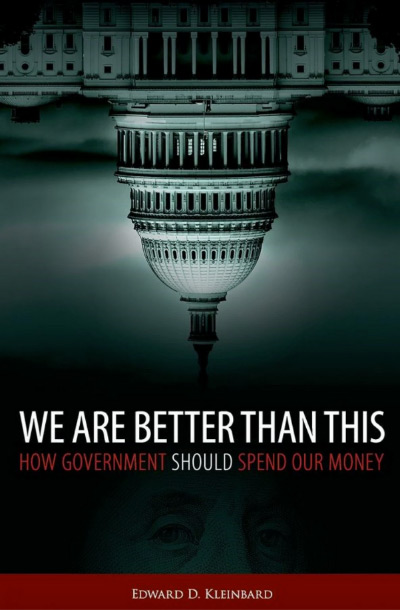 We Are Better Than This
How Government Should Spend Our Money
By Edward D. Kleinbard
Kindle Hardcover Paperback Mass Market Paperback Audiobook MP3 CD
This book review appeared in the Fall 2015 issue of The Independent Review.

In We Are Better Than This: How Government Should Spend Our Money, Edward D. Kleinbard proposes to readers that by putting government to work in the areas in which government most productively complements private markets, our country will be made healthier, wealthier, and happier. Specifically, he recommends “a more muscular federal government that supplements the private sector through sensible investment and insurance programs” (p. xx).

Kleinbard provides an excellent identification of market shortcomings and U.S. fiscal policies that have room for improvement. Unfortunately, his well-intentioned policy proscriptions are entirely undermined by his poor causal inferences and failure to consider, present, or discuss the public-choice literature. He relies far too much on unrealistic, normative assumptions of a benevolent, well-informed government. Further, the book is riddled with cherry-picked statistics that draw close resemblance to those in Thomas Piketty’s recently published book Capital in the Twenty First Century (Cambridge, Mass.: Belknap Press of Harvard University Press, 2014), which, not surprisingly, Kleinbard praises as complementary to his own work.

Kleinbard divides the book into three sections. Section I, “Our Fiscal Soul in Peril,” introduces the moral foundation and recent empirical evidence for which the author justifies his recommended changes. Section II, “Starving Our Fiscal Soul,” dissects several of the major tax bases and federal expenditure programs and compares those fiscal policies with similar policies in other Western democracies. Then Section III, “Reclaiming Our Fiscal Soul,” details a proscription for improving the tax code and increasing government spending via public investment and insurance.

Section I introduces the metaphor of a “fiscal soul.” Kleinbard describes the fiscal soul as a collection of nationally shared values that can advance society’s happiness through governmental fiscal policy. Promoting a healthy fiscal soul, he claims, is the way we can avoid becoming “a nation of jerks.”

Kleinbard cites Adam Smith’s The Theory of Moral Sentiments throughout the book and uses Smith’s notion that “[w]hen the happiness or misery of others depends in any respect upon our conduct, we dare not, as self-love might suggest to us, prefer the interest of one to that of many” (book III, sec. 1, chap. III, qtd. on p. 27) to argue against the philosophies based on the pursuit of self-interest. Kleinbard launches an assault on several “market triumphalist” economists, including Greg Mankiw, Casey Mulligan (a sixteen-page critique), and George Stigler (and basically all Chicago School economists) as well as a disdainful critique of Friedrich Hayek and Milton Friedman: “Both [Hayek and Friedman] were consumed by the risks inherent in big government, because collectivism, even if arrived at through democratic processes, was said to erode freedom of choice both in the marketplace and in the political arena. . . . Hayek at least had the excuse of staring into the maw of terrifying totalitarian regimes when he wrote his book, but Friedman, for all his accomplishments as an economist, reads today as a political and social simpleton” (p. 39). Kleinbard supports this claim by providing two bits of evidence: first, China has experienced economic growth under a totalitarian politician regime, and, second, Western democracies have not become suffocating collectivist societies.

Throughout the book, Kleinbard makes no mention of any counterarguments to his smoking-gun pieces of evidence, nor does he cite the volumes of literature that suggest the opposite conclusion. Might China’s tremendous recent growth have been caused by a reduction in market control by governments? Can the recent decline in economic growth rates by Western democracies be—even partially—attributed to growing public-sector debt and efficiency-decreasing market interventions by Western governments? Kleinbard’s failure even to acknowledge such evidence makes his arguments appear to be half-researched and ultimately imprudent.

Without mentioning empirical evidence, Kleinbard lambastes Friedman’s “insensitivity to the value of national parks” and belief that “racial discrimination would wither in the face of market competition” (p. 39). To him, it appears that any economist who believes in smaller government and the power of markets is foolish.

His misguided attack on market triumphalists and his poor policy proscriptions unfortunately overshadow his relevant critique of several market outcomes. He argues that gross domestic product (GDP) is an imperfect tool for measuring social welfare. GDP certainly has its flaws, but Kleinbard insists that to market triumphalists “the purpose of life is for the United States to win the gold medal at the GDP Olympics every year” (p. 130). Here he is far off the mark. Free-market-supporting economists widely reject GDP as a measure of social welfare for its many shortcomings. Perhaps most notable among those shortcomings is that all forms of government spending count toward GDP!

The volume discusses, at length, inefficiencies in the tax code, including progressive subsidies and tax deductions. The mortgage-interest deduction and untaxed employer-provided health-care benefits are broadly unpopular policies among economists. Kleinbard promotes the elimination of such deductions in order to raise extra revenue. This additional revenue would allow the federal government to increase Kleinbard’s preferred expenditures: investment and insurance.

Kleinbard argues that government can invest in major infrastructure, including public goods, natural monopolies, and welfare-improving projects that the private sector cannot fulfill. He claims “that a government—that is, all the people, acting together—can . . . take a longer view of an infrastructure investment’s period than can most private firms, since a government’s long-term viability is largely assured . . . and the government, unlike a private firm, does not need to earn a profit on its infrastructure investments. For all these reasons, it is unsurprising that private toll roads and the like remain a small fraction of public infrastructure spending in the United States” (p. 5).

Noticeably absent is the public-choice perspective that government is run by individuals (politicians). Those politicians respond to incentives, and they are frequently near-sighted because they are incentivized to keep current voters happy. Further, in the absence of a profit-seeking motive, governments and bureaucracies do not have the incentive to minimize costs or produce efficiently. Kleinbard also fails to mention that publicly provided roads, pricelessly accessible to almost anyone, crowd out privately provided roads.

On poverty and education, Kleinbard acknowledges and presents research that poverty significantly hinders human capital development. Few would disagree that poverty is a major problem. Poverty implies handicaps. Poverty inhibits growth. Poverty is highly correlated to intelligence and education, and poverty tends to be hereditarily persistent. Many, including Kleinbard, see education as the best mechanism for breaking the poverty cycle. Thus, he concludes that education is so important that the government needs to invest in it.

Kleinbard gives our public-school system a “predictably depressing” grade (p. 290). His proposal for improving the education system shows promise: investing more in early childhood education and “embrac[ing] the charter movement more directly. . . . [C]harter schools, as laboratories for alternative pedagogical styles, can be honored . . . [and] the best ideas can then be harvested and deployed more widely” (p. 298). Although this suggestion appears to be promising, Kleinbard conveniently ignores the barriers needed to change. He makes no mention of school incentives, teacher incentives, Friedman’s school vouchers, or powerful labor unions with powerful political ties.

Finally, the author addresses the U.S. health-care system, which he acknowledges as one of the most inefficient in the world. He criticizes both the Democrats and Republicans for the Affordable Care Act (ACA). He was displeased with Democrats because the ACA, although likely improving the fiscal solvency of Medicare and Medicaid through the insurance mandate, falls miles short of correcting the country’s underlying health-care problems. The Republicans’ tunnel vision focused on repealing the ACA similarly does nothing to address the foundational problems in the health-care system. He restates his claim that the government should play a role in providing social insurance and investment via health care, but he does not identify an efficient means of accomplishing that outcome.

Overall, Kleinbard identifies many fiscal policies with room for improvement. However, his proposition that taxes be increased to fund greater levels of government investment and government insurance is presented within the naive, normative context of a benevolent, well-informed government. I think readers of The Independent Review will find this book more frustrating than enjoyable to read.