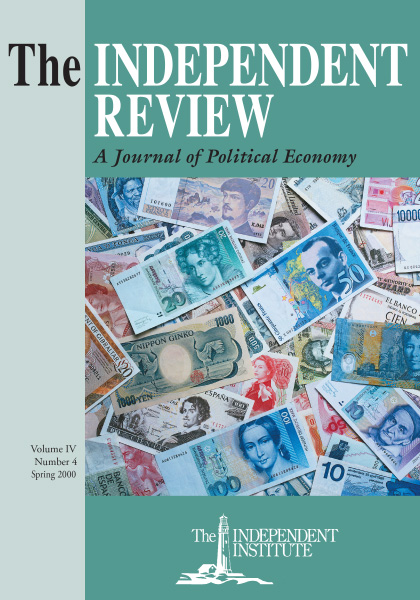 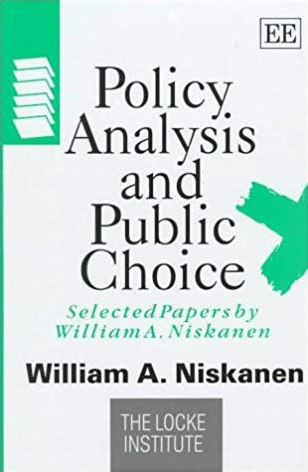 William Niskanen’s volume of selected papers showcases more than thirty selections from his previously published work, and the collection reveals him to be a thoughtful observer of contemporary government and an insightful public-policy analyst. Niskanen is best known for his 1971 book, Bureaucracy and Representative Government, which he wrote while working at the Institute of Defense Analysis. The first, autobiographical chapter of the book notes that previously he worked at RAND and the Defense Department, and afterward at the Office of Management and Budget, as a professor at Berkeley, at the Ford Motor Company, as a member of the President’s Council of Economic Advisors, and as chairman of the Cato Institute, the position he now holds. His career history is relevant to this volume, because his writing on policy issues is grounded on both extensive experience in the policy arena and a firm grasp of economic principles. (He also holds a Ph.D. in economics from the University of Chicago.) This combination of academic training and firsthand knowledge of policy making, along with Niskanen’s keen insights, makes each essay in the volume worth reading on its own merits.

After the introductory chapter, the book is divided into two sections: one containing sixteen chapters under the heading of policy analysis, and another with seventeen chapters under the heading of public choice. The policy analysis chapters cover a wide range of topics from defense policy to drug policy to problems with the Washington, D.C., government. Several chapters deal with economic policy during the Reagan administration and offer insights based on Niskanen’s firsthand observations. The public-choice chapters also cover a wide range of topics, and like the policy analysis chapters, many benefit from Niskanen’s drawing on his firsthand involvement in government. Because of this policy orientation, the public-choice chapters also fall under the broad heading of policy analysis and tend to analyze issues, such as environmental policy, bureaucratic organization, and constitutional design, rather than more theoretical aspects of public choice. Each chapter offers insights, but the mix of topics is so varied that the chapters do not provide the reader much continuity. If the volume has a unifying theme, it is Niskanen’s concern about excessive government and his search for ways to limit government power.

The material in later chapters does not draw on what is in earlier chapters, so there is no reason to read the chapters sequentially. For most readers of The Independent Review, absent a specific interest in defense policy (chapters 4 and 5), crime (chapters 3 and 7), or some other policy area covered in the book, the later chapters will probably hold more interest than the earlier ones, and would be a better place to start. Several chapters toward the end of the volume deal with the constitutional foundations of American government, and they are are especially thought-provoking.

Along similar lines, chapter 32, “The Prospect for Liberal Democracy,” analyzes the familiar problem that unchecked democracy may collapse when voters discover they have the power to vote transfers to themselves. Niskanen notes that the American founders attempted to deal with this problem by imposing strict constitutional limits on the activities of the federal government, but those limits have been eroded significantly in the twentieth century. He argues for a constitutional reform to allow a substantial minority of states to nullify any federal action, an intriguing policy recommendation. In the next chapter, “The Erosion of the Liberal Economic Order,” he argues that changes in social and political rules in the last half-century are undermining the social order by eroding personal responsibility and changing the popular perception of rights, leading to a further erosion of the political constitution. Chapter 23, “The Pathology of Politics,” also deals with the erosion of constitutional constraints on government.

In Chapter 27, “The Soft Infrastructure of a Market Economy,” originally published in 1990, Niskanen discusses the importance of the legal system, the accounting system, and cultural attitudes to the success of a market economy. His analysis is insightful, the more so because of its publication date, a time when people were optimistic about the transition of the former Soviet bloc toward a market economy. In hindsight, one can see that Niskanen’s analysis focuses on the very problems that have hindered that transition, especially in Russia. Coupled with the analysis of constitutional rules, this chapter presents a convincing argument that the political order that has led the United States to prosperity is fragile, and that if it should collapse, that order and its accompanying prosperity will probably be difficult to recover.

The chapters in the first part of the book will be of less general interest than those toward the end, because they deal with specific policy issues. In chapter 3 Niskanen examines crime statistics and concludes that little is known about the effect of policy on crime. He calls for decentralization of crime policy, to better try out a variety of policies to see what works. In chapter 7, “Economists and Drug Policy,” he looks at both sides of the argument to legalize drugs, and he concludes that legalization would reduce some problems but increase others. Other chapters deal with defense policy, the District of Columbia government, and the effect of school district size on student performance. Some readers may be especially interested in the several chapters on public-policy issues during the Reagan administration. Because he has been a participant and a close observer, Niskanen’s revelations about policy making that go beyond what one would get from an ivory-tower academic.

Although Niskanen’s analysis is insightful and thought-provoking on all of the various topics covered, the whole volume seems to have less value than the sum of its parts. The collection will make some of these papers easier to locate, if potential readers are aware that they have been reprinted here, but the chapters do not complement and support one another as did the chapters in Niskanen’s earlier collection on bureaucracy, Bureaucracy and Public Economics (Aldershot, Eng.: Edward Elgar, 1994). If one is interested in any of the topics Niskanen discusses, his analysis is sure to shed light on the subject. The topics are so varied, however, and the methods of analysis so different, that the volume will have greatest value as a reference to be consulted on various topics, rather than as a book to be read from cover to cover.