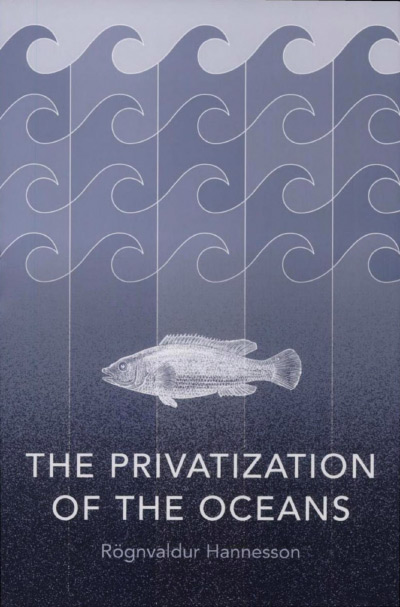 The Privatization of the Oceans
Rognvaldur Hannesson
Kindle Hardcover Paperback
This book review appeared in the Winter 2006/07 issue of The Independent Review.

Rognvaldur Hannesson’s Privatization of the Oceans is a fascinating story of the development of property rights in ocean fisheries. Hannesson, a fishery economist, is to be commended for backing up his story with solid research and thoughtful insights into the challenges facing both the fishing industry and national governments in this ongoing development.

Hannesson sets the tone with an interesting comparison between the development of property rights in ocean fisheries and the enclosures and clearances of common land in England and Scotland centuries earlier. He finds notable similarities, including bitter battles over the initial allocation of property rights and the impossibility of accommodating everyone in the process (p. 23). He revisits this theme later in the book when he examines why some countries have adopted property rights in their fisheries more readily than others.

Next, Hannesson explains why the transition to property rights in commercial fishing is a relatively recent phenomenon, even though ocean fishing has been carried out for centuries. Prior to the 1900s, he writes, “[f]ishing technology was for the most part so primitive that the effect of fishing was of limited consequence; the abundance of fish was influenced more by environmental factors than by human activity” (p. 24). But fishing changed dramatically after the end of World War II. Technological improvements such as sonar to pinpoint the location of large aggregations of fish and powerful vessels to track them down to the ends of the earth rendered fish stocks extremely vulnerable to hook and net.

Fishing’s new lethality, coupled with the common-property nature of the resource, made it prone to what Garret Hardin famously called “the tragedy of the commons” (Science 162 [December 13, 1968]: 1243–48). Hannesson writes, “Fish accessible to anyone will be captured as quickly as possible by those who first discover them, for otherwise they will be taken by someone else” (p. 1). Moreover, “without rights securing for individuals the fruits of their restraint, no one will have an incentive to leave anything behind” (p. 2).

One might add that with ocean fish stocks being a common-property resource and with few controls on access, there is a tendency for too many fishermen to enter the fishery and for too many fish to be taken, as each individual fails to take into account the full costs of landing fish—that is, the depletion costs imposed on others—while reaping the full benefits. Moreover, as more fishermen enter the fishery and competition intensifies, they all will invest in equipment that improves their chances of landing fish first. These investments would not be necessary in the absence of such competition.

Hannesson devotes a whole chapter—and rightly so—to what he considers the most important event in the history of property rights in ocean fisheries: a change in the international law of the sea (in the latter part of the 1970s for fisheries), giving coastal nations the right to control access to ocean fish stocks out to two hundred nautical miles from their shores. A nation’s right to control access to fish stocks previously had extended a mere three miles from its shore. The change was significant because now many of the world’s commercial fish stocks fell under national jurisdiction, and subsequently individual property rights could be developed with governmental backing. Without the change, observes Hannesson, it is difficult to imagine how property rights would be developed for anything but the most sedentary species residing close to shore. Yet to be worked out is how to attain effective control over the exploitation of fish beyond national jurisdictions (pp. 39–42).

For fish stocks under national jurisdiction, the remaining job of developing individual property rights has become critical because, as Hannesson points out, these stocks remain a commons for a nation’s resident fishermen. Hence, the tragedy of the commons still rears its ugly head—sometimes in spectacular fashion—when controls are weak or nonexistent. Witness the tragic collapse of cod stocks off Atlantic Canada and the demise of New England groundfish in the 1990s.

Hannesson considers “exclusive use rights” the most practical approach (p. 54), as opposed to private-property rights to the fish stocks themselves. Among the various ways such rights can be defined, the one that best promotes efficiency is a system of individual transferable quotas (ITQs). An ITQ entitles its holder to catch a specific share of the total allowable catch set for a fish stock for a given period. Being tradable, the ITQs “are particularly promising as a vehicle to rationalize a fishery plagued by overcapitalization” because the more-efficient fishers tend to buy quotas from the less-efficient fishers, who sell their shares and leave the fishery (p. 57). Notably, ITQs have been the most widely applied property-rights arrangement adopted since the change in the international law of the sea.

Hannesson examines the ITQ experience country by country, leaving out those with which he is not familiar, such as Australia and the Netherlands. With backing from industry, the New Zealand government spearheaded the adoption of ITQs in some of its most commercially important fisheries in the mid-1980s. ITQs are used today in nearly all commercial fisheries there. The economic gains and improvements in resource management are evident (pp. 92–95). In contrast, the Chilean government tried to implement ITQs in coastal fisheries, but because the government acquiesced to the demands of special interests, the approach became infeasible for developed fisheries. For these fisheries, “only half of the total catch can be put under ITQs, and ITQs can only be implemented gradually by putting 5 percent on the total catch under ITQs by auction each year, which would make for a ten year transition” (p. 98). As a result, ITQs have yet to be adopted there.

Hannesson devotes two separate chapters to Iceland and the United States. Like New Zealand, Iceland is considered a pioneer in the use of ITQs, having adopted them in selected fisheries in the early 1980s. Although the ITQs there have increased economic efficiency (p. 121), they have not lacked controversy. Iceland’s economy depends heavily on fishing, and some small communities have suffered more than larger ones under quota consolidation. In addition, some public-interest groups and academics complain that gains in quota value have been too concentrated. These critics would like the government to capture some of these gains through a “rent tax” (p. 125), a proposal that quota holders resist vigorously.

In the United States, ITQs have proven difficult to implement. In the early 1990s, they were adopted in four federal fisheries, giving rise to substantial benefits. However, not everyone benefited. Frozen-fish processors insisted that they should have been compensated when the Alaska halibut fishery became a fresh fish supplier under ITQs. In addition, some environmental advocacy groups oppose ITQs on ideological grounds, resenting such rights as a means of privatizing a public resource. One exception is Environmental Defense, which supports ITQs as an effective tool against over-fishing and overcapitalization. In any case, a congressional moratorium was imposed on the use of ITQs in other federal fisheries (p. 147). Although the moratorium was lifted in October 2002, the “transparent and democratic” process of designing ITQ programs carried out at the regional fishery council level—so-called miniparliaments—has become bogged down in battles among special interests (pp.160–61).

One flaw in Hannesson’s treatment of this subject is that he restricts the potential benefits of property rights to commercial use of fish as food (pp. 12, 66, 178). This restriction is a mistake because the development of property rights in fisheries for recreational and environmental purposes also has the potential to generate great benefits. Indeed, some movement in this direction has already occurred. For example, the Atlantic Salmon Federation leased salmon netting rights off the Faeroe Islands and set them aside to allow returning salmon respite from nets (see Terry L. Anderson and Donald R. Leal, Enviro-Capitalists: Doing Good While Doing Well [Lanham, Md.: Rowman and Littlefield, 1997], pp. 135–36). The Nature Conservancy and Environmental Defense recently teamed up to purchase fishing permits and vessels from fishermen in order to lessen fishing pressures off parts of California (Los Angeles Times, June 28, 2006).

All told, however,The Privatization of the Oceans is an enjoyable read and a valuable source of information for specialists and nonspecialists alike.

Donald R. Leal
Property and Environment Research Center (PERC)
Energy and the EnvironmentEnvironmental Law and RegulationLaw and LibertyNatural ResourcesPrivatizationProperty Rights, Land Use, and Zoning
Subscribe Buy This Issue Get the App