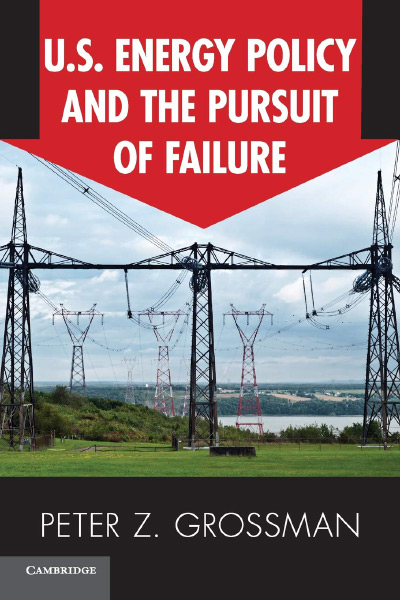 U.S. Energy Policy and the Pursuit of Failure
Peter Grossman
eTextbook Hardcover Paperback
This book review appeared in the Summer 2014 issue of The Independent Review.

“Do something” is a frequent invocation that spurs policy action in response to exogenous economic shocks. Nowhere has this invocation been more frequent or obvious than in U.S. energy policy. As Peter Grossman argues in his analysis of the past forty years of energy policy, U.S. Energy Policy and the Pursuit of Failure, its effects have been insidious, beguiling us to believe that we can solve dynamic economic problems with large-scale, top-down planning tools and an “Apollo project” mindset better suited to solving engineering problems.

Grossman’s historical survey starts with the oil shortages in 1973 arising from the combined Organization of Petroleum Exporting Countries (OPEC) supply embargo and President Nixon’s wage and price controls (with the latter more clearly the cause of the shortages). Like many other analysts, Grossman dates the substantive origin of deliberate federal energy policy to this combination of events, the magnitude of which created a firm impression among policymakers that it should be a matter of national public policy to ensure a reliable supply of oil at low and stable prices. Grossman argues that since that time a succession of “do something” policies has generally meant doing the wrong things—certainly in hindsight, but also possibly avoiding them with some informed foresight if policymakers had been willing or able to exercise such foresight.

The combination of complex objectives, political incentives, and confirmation bias reduced their ability to exercise foresight. Energy-policy objectives have been a combination of energy availability and affordability, national security/“energyindependence,” and reduced energy use to improve environmental quality. These motives usually conflict and have tended to focus policymaker attention on goals such as “energy self-sufficiency,” which may not be desirable at all and may not actually be feasible. Grossman notes what has become the “new normal” in U.S. federal energy policy: “This combination, self-sufficiency and moderate prices, represented what I term the ‘energy policy conundrum,’ which is basically this: there was no solution to U.S. energy problems because the problems were posed as energy dependence and high energy prices, and to solve these two together demanded steps that were mutually exclusive” (p. 35). Adding in the environmental objective creates another dimension on which energy-policy steps are often mutually incompatible.

Policymakers and energy producers (but less so energy consumers) also face political incentives that make long-term forward-looking thinking less likely. Energy extraction is sufficiently profitable, and the federal government’s interventions in energy markets since the early twentieth century have been frequent enough that both firms and policymakers have developed economic interests in advancing particular policies. Either to favor their own operations or to raise rivals’ costs or to maintain the status quo, energy firms have resources at stake when political decisions are made, and policymakers who want to benefit while exerting some semblance of control in the industry accept their lobbying. Thus, rent seeking is pervasive, and energy industries have been politicized for most of the twentieth century and are likely to continue to be so in the twenty-first century.

Another factor that limits foresight in the policy realm is the confirmation bias the leads policymakers to see persistent, unsustainable energy use despite evidence to the contrary. Much of U.S. energy policy is grounded in the neo-Malthusian belief that our use of finite resources is unsustainable and that resource exhaustion will occur in the near future unless we curtail our energy use quickly and dramatically. Combining that belief with the objective of stable, reliable, affordable supplies has created a perpetual “do something” mentality among federal policymakers, particularly with respect to oil, and the recent technological innovations in horizontal drilling and hydraulic fracturing that have increased proven domestic reserves of oil and natural gas have not eliminated this belief. Even in the Reagan administration, when world oil prices fell and domestic energy supplies were relatively plentiful, the energy independence/resource exhaustion narrative stayed the same, despite the administration’s use of more price-oriented and market-based rhetoric (p. 263).

The federal energy objectives of ensuring stable supplies at low, stable prices intersect with national-security objectives and over the past four decades have led to policies such as price and allocation controls, prorationing of production, funding of large programs to develop synthetic fuels from coal, subsidies for domestic oil production (and for domestic substitutes such as biofuels and other renewables), production tax credits, and federal loan guarantees to energy firms to support research and development as well as commercialization of new technologies. Grossman documents the unanticipated and frequently perverse consequences of these policies and argues that their repetition over the past decades is an indication of the national energy policy’s failure.

Grossman’s historical survey examines the energy policy events of the past forty years in detail, focusing particularly on the turbulent 1970s and early 1980s. He sees those events as a succession of attempts to control and engineer economic outcomes relating to energy, replacing the decentralized judgment of buyers, sellers, and innovators with the centralized regulation of federal policymakers. As he notes, this replacement is likely to yield efficient outcomes only “if regulators have full knowledge of present and future consumer demand patterns and present and future supply constraints” (p. 53). Although Grossman does not invoke Friedrich Hayek’s knowledge problem explicitly in his analysis, it is pervasive here; policymakers’ failure to see the knowledge problem or to believe that it exists contributes to their “fatal conceit.”

Grossman’s approach is to describe the chronology of energy policy since 1973 and analyze it using a theoretical framework that is largely public-choice theory. In each chapter, he also incorporates simple economic models and graphical analysis to illustrate the economic contradictions embedded in many energy-policy decisions. Public-choice theory provides a useful tool for understanding the origins and evolution of U.S. energy policy because much of that policy’s history has been one of political influence in markets, lobbying and rent seeking, regulatory capture, and political institutional inertia.

Grossman observes several repeating patterns in energy policy beyond the pervasiveness of the “do something” perpetual crisis mindset. One pattern is that policymakers fail to tackle basic questions, such as why the United States needs an energy policy (p. 109) and why the goal of energy policy should be self-sufficiency (p. 165): “In reality, true energy autarky is possible only with the most drastic, even oppressive steps. That reality is seldom noted; rather, energy independence is presented as an attainable goal if Americans only have sufficient will. Such thinking leads to policies that cannot succeed, but the rhetoric remains, and failed policies are repeated” (p. 129).

Policymakers’ failure to ask these fundamental questions and adherence to the conventional narrative are two reasons for the apparent failure to learn from policy mistakes and to repeat them. Another reason is that unlike markets, political institutions have much weaker processes for incurring costs and engaging in error correction (a point consistent with Nassim Taleb’s current arguments about having “skin in the game”; see Nassim Taleb and Constantine Sandis, “Ethics and Asymmetry: Skin in the Game as a Required Heuristic for Acting under Uncertainty,” draft working paper, n.d., available here.

Another pattern that Grossman identifies is the belief that “if we legislate it, they will come”—in other words, that passing a piece of legislation mandating a particular technology path, such as California’s infamously aspirational electric vehicle targets, will be sufficient to ensure the desired outcome. From synfuels to electric vehicles and beyond, this belief that legislation can bring new energy technologies into existence is a dominant feature of U.S. energy policy. This belief complements the idea that largescale cleaner technologies (such as synfuels, carbon capture and sequestration, and wind power) can be a panacea to resolve the conflicting policy objectives of energy sufficiency, environmental sustainability, and national security, despite their lack of timely technical feasibility and their other costs (such as the intermittency of wind and the dangers of wind turbines to many bird species, including endangered eagles).

Grossman concludes that the “Apollo project” engineering approach to the dynamic economic aspects of energy is fatally flawed: “[L]egislation has produced mostly waste and confusion. Still, elected officials seem forever smitten by the prospect of a fairy-tale ending: the U.S. achieves energy independence through an Apollotype program that produces a low-cost technological energy panacea” (p. 332). Despite this repetition over the past forty years, any success that people in the United States have enjoyed regarding energy availability and productivity has been a consequence of individual ingenuity and creativity more than of dirigiste federal policies, and organic technological change has outstripped the capacity for political institutions to adapt to the changing conditions of a robust, dynamic global economy.

This book’s main contribution is the careful historical detail and narrative combined with the political economy, public-choice, and institutional analysis of the evolution of U.S. energy policy. Combining this narrative with more theoretical depth and a more extensive description of the theoretical framework informing the analysis would have made the work more analytical and would have helped it overcome what I see as its main shortcoming: I am not sure how persuasive Grossman’s argument would be to a reader who disagrees with his main thesis, who thinks that the failure of U.S. energy policy is instead not enough of a focused, centralized effort. I am not that reader in that I agree with Grossman’s main premise and theoretical framework, but I hope that such readers do read the book and engage in a more analytical policy discussion about the economic contradictions in our energy policy.