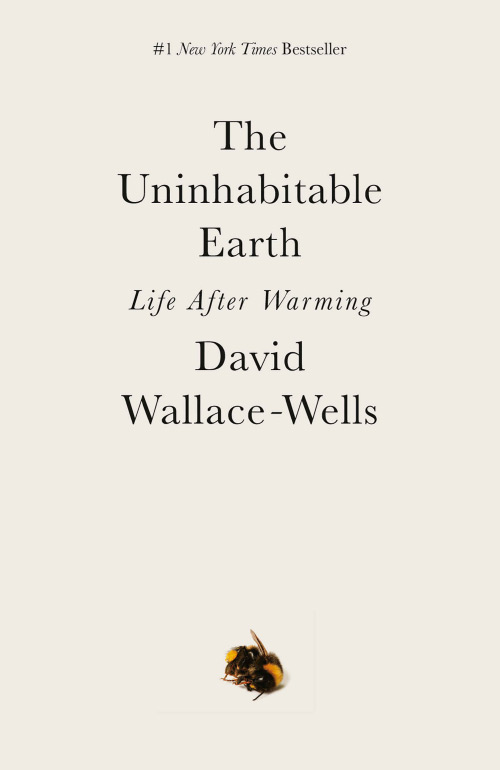 The Uninhabitable Earth
Life after Warming
David Wallace-Wells
Kindle Hardcover Paperback Audiobook
This book review is a web exclusive for the Summer 2020 issue of The Independent Review.

The key to its pessimism is David Wallace-Wells’ overall strategy of 1) taking what most consider to be worst-case climate change scenarios as most probable, 2) acting as if these worst-case projections are already history by repeatedly omitting qualifiers such as “may” or even “probably,” 3) assuming that scientific, technological, entrepreneurial, and institutional advances in the coming century will be anemic, and 4) linking almost every possible negative trend to climate change even when the link is tenuous.

Although he admits that “projecting future warming is a foolish game,” he guesses that “the likeliest outcome ... sits at about 3 degrees or just a bit above” (p. 46). This projection—that by the end of the century the average global temperature will rise about 3 degrees Celsius from its level in the year 2000—is at the very top end of the Intergovernmental Panel on Climate Change’s RCP 6.0 (representative concentration pathway) projection and well above its more plausible RCP 4.5 projection. (See Matthew Collins et al. Long-term Climate Change: Projections, Commitments, and Irreversibility in T.F. Stocker et al. editors, Climate Change 2013: The Physical Science Basis. Contribution of Working Group I to the Fifth Assessment Report of the Intergovernmental Panel on Climate Change. New York: Cambridge University Press). Earlier in the book, however, Wallace-Wells suggests that we are “speeding so blithely along ... to more than four degrees Celsius of warming by the year 2100” (p. 6) and in other places he countenances warming of five or six degrees—extraordinary figures that are far above plausible projections. More immediately, Wallace-Wells warns, “the world has, at most, about three decades to completely decarbonize before truly devastating climate horrors begin” (p. 214). This will be followed by the twenty-second century, the “century from hell” (p. 12). Just as important, he argues that we in the United States and around the world are already suffering mightily from the effects of greenhouse-gas-induced climate change. “Climate change is here” (p. 18, emphasis in the original) and is responsible for the civil war in Syria, for example.

Chapters explore the impact warming may have on hunger, “drowning” (rising sea levels and storms), wildlife, supplies of fresh water, life in the oceans, air pollution (including high CO2 levels which directly reduce cognitive abilities according to studies he cites), the spread of disease (such as malaria and microorganisms currently frozen in Antarctica), economic collapse, armed conflict and crime, and mental health.

After this lengthy enumeration of horrors, Wallace-Wells considers the broader picture of the meaning and fate of humanity. He indicates that we are all villains in the story and chides climate scientists for not spreading the alarm, afraid that if they make factual errors they will be discredited and afraid that if they tell the truth they will engender despondency among the general public. If these scientists are afraid they will be accused of crying “wolf,” Wallace-Wells is not afraid to cry “WOLVES!” Fearmongering (is it warm-mongering?) is needed now, in his view.

I decided to learn about “life after warming” after the Office of Sustainability at my university invited Wallace-Wells to speak and purchased fifty copies of the book (unfortunately, I had to miss the talk). Ultimately, I learned a lot from reading The Uninhabitable Earth (not just how “doomers” think), because Wallace-Wells covers a lot of ground and has read very widely.

However, I noticed a wide array of errors and hard-to-support arguments throughout the book. Here is a sample. Wallace-Wells suggests that malaria will be common in places like Copenhagen and Chicago—despite the fact that global malaria deaths fell in half as slight warming occurred between 2000 and 2015 (see Max Rosser and Hannah Ritchie, “Malaria”). He suggests that climatologists can, today, “predict with uncanny accuracy where a hurricane will hit, and at what intensity, as much as a week out from landfall; this is not just because the models are good but because all the inputs are known. When it comes to global warming, the models are just as good” (p. 43). He suggests that the humans will need twice as much food by 2050. He suggests that “the tropics are already too hot to efficiently grow grain” (p. 50) and in the same paragraph notes that Brazil is one of the top four corn producers in the world. He suggests that “nearly all of the astonishing productivity gains [in food production] of the last century trace back to the work of a single man, Norman Borlaug” (p. 53). He thinks that California’s water shortage problems are due to the melting of its glaciers. (Perhaps he should read books like Aquanomics: Water Markets and the Environment. 2012, edited by B. Delworth Gardner and Randy Simmons. Piscataway, N.J.: Transaction Publishers for Independent Institute,). He states that “In the last hundred years, many of the planet’s largest lakes have begun drying up, from the Aral Sea ... to Lake Mead ...” (p. 88). Oops, Lake Mead didn’t exist until 1935 (and the Aral Sea’s woes appear to be the result of dysfunctional central planning). He cites an estimate that Mexico’s coral reefs provide protection against flooding valued at $400 million annually, but doesn’t notice how small this number is. A web search indicates that Mexicans spend over ten times more—about $5.5 billion per year—on candy. He touts a theory that modern economic growth rests almost entirely on fossil fuels rather than broader technological and institutional innovations. He worries that it is getting so hot that airplanes won’t be able to attain sufficient lift to take off at airports in hot places like Phoenix, but doesn’t notice that the world's busiest airport by international passenger traffic is now in Dubai. He essentially equates all weather problems with greenhouse-gas-induced climate change, saying that “in the United States, in 2017, the estimated cost [of climate change] was $306 billion” (p. 166), in referring to a National Oceanic and Atmospheric Administration (NOAA) study that tallied up the damages from hurricanes, tornadoes, storms, and forest fires. Apparently there were none of these weather phenomena until the past few decades when global warming arrived and recent massive building in the path of hurricanes isn’t worth mentioning. (Incidentally, the NOAA figure dropped to $91 billion in 2018 or about 75 cents per American per day.) Wallace-Wells even suggests that “We are still, now, in much of the world, shorter, sicker, and dying younger than our hunter-gatherer forebears” (p. 199). This contradicts standard estimates that modern hunter-gatherers have a life expectancy at birth between 21 and 37, and ancient Paleolithic peoples lived to about 33. These figures are far worse than life expectancies in the poorest countries of the world today—around 50 years.

Rather than closing with a clear game plan for addressing these problems, Wallace-Wells argues that we need a global political revolution—right now—that brings about a swift move away from fossil fuels. But he clearly senses that this won’t happen and ultimately reveals a very nihilistic outlook. A growing number of people concerned about warming have suggested that geoengineering is a plausible (simple?) solution to this potential threat if temperatures do actually rise substantially in the future. One scenario involves scattering a thin layer of sulfur dioxide in the stratosphere to increase the earth’s reflectivity and reduce the amount of sunlight warming the planet. This would mimic what occurs after massive volcanic eruptions, such as Mount Pinatubo’s 1991 eruption, which is estimated to have cooled the planet by half a degree Celsius for about three years. However, Wallace-Wells dismisses such ideas. It strikes me that he would rather live in a world headed for doom than one in which people adopt the most sensible solutions to their problems.