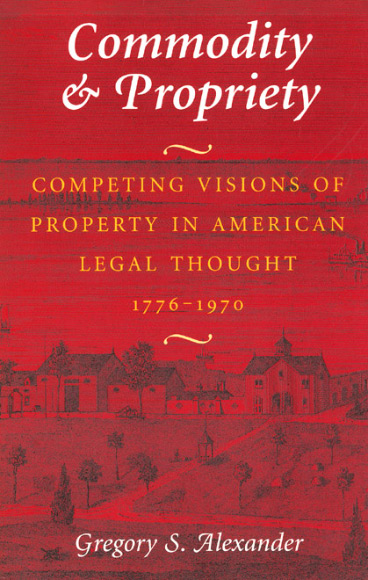 At the outset of his book Commodity and Propriety: Competing Visions of Property in American Legal Thought, 1776–1970, Gregory S. Alexander defines the goal of the work: “The aim of this book is to correct a widely shared misconception about the historical meaning and role of property in American law” (p. 1). In particular, Alexander wants to debunk the standard view that property law in America is dominated by a vision of “property as commodity” and to establish a long-running and continuing “dialectic” between this view and an alternative view of “property as propriety.” If this is his goal, the book fails miserably.

Alexander bemoans that “for too long now, legal scholars, judges, historians, and political theorists have tended to accept uncritically the claim that there has been a single tradition of property throughout American history” (p. 1). This dominant and “mistaken” view understands property as an economic and market commodity that enables individuals to satisfy their “own private agendas and satisfy their own preferences, free from governmental coercion or other forms of external interference. Property, according to this understanding, is the foundation for the categorical separation of the realms of the private and public, individual and collectivity, the market and the polity” (p. 1).

In contrast to this “property as commodity” tradition, Alexander argues for a competing view of property in the American legal tradition that he labels “property as propriety.” “The basic argument of this book,” he writes, “is that this commodity theory of property is only half right. Property-as-commodity is one-half of a dialectic that American legal writing has continuously expressed from the nation’s beginning to the recent past. The other half of the dialectic is a conception . . . that I will call ‘property as propriety’” (p. 1). Under the latter view, “property is the material foundation for creating and maintaining the proper social order, the private basis for the public good” (p. 1). And although the understanding of the “public good” has changed over time, all of these “property as propriety” views “share . . . a commitment to the basic idea that the core purpose of property is not to satisfy individual preferences or to increase wealth but to fulfill some prior normative vision of how society and the polity that governs it should be structured” (p. 2).

Alexander’s book reads like a standard history of property law turned upside down; it is as if the footnotes and text had been reversed. He glorifies obscure, minor, and in many cases simply bizarre theorists of American property law. Conventional wisdom holds that the winners write the history; in this case Alexander not only writes the losers’ version of history but argues that they haven’t even lost. To understand the thrust of the book, consider that although it contains 386 pages of text and another 82 pages of endnotes, it presents no substantive discussion of the takings clause of the Fifth Amendment, despite (or perhaps because of) that clause’s seemingly unambiguous constitutional affirmation of the “property as commodity” view (Richard A. Epstein, Takings: Private Property and the Power of Eminent Domain [Cambridge, Mass.: Harvard University Press, 1985]). John Locke gets only a handful of passing mentions. By contrast, the views of many obscure and long-forgotten theorists receive extended discussion.

In many cases when Alexander actually does discuss major historical figures, his interpretations of their views are incorrect. For instance, Alexander reprises the old story that Thomas Jefferson was actually a “civic republican,” rather than a believer in the liberal theory of property (chap. 1). He rejects the contrary opinion of the historian Joyce Appleby (“What Is Still American in Jefferson’s Political Philosophy?” in her Liberalism and Republicanism in the Historical Imagination [Cambridge, Mass.: Harvard University Press, 1992]) because you guessed it she does not think dialectically: “I view Jefferson’s writing as consistently preoccupied with the same basic dialectic, a dialectic of stability and dynamism. Professor Appleby’s commitment to a linear framework prevents her from seeing it dialectically” (p. 392 n. 12). Subsequent historical research has tended to confirm Appleby’s understanding of Jefferson and to cast further doubt on Alexander’s characterization of Jefferson as a civic republican (see John Majewski, A House Dividing: Economic Development in Pennsylvania and Virginia before the Civil War [New York: Cambridge University Press, 1999]).

Similar confusion marks Alexander’s contention that James Madison’s endorsement of individual “property rights” in speech and opinions rested on a civic republican view of property (p. 68). As John McGinnis has demonstrated, Alexander’s understanding has the analysis completely backward, because Madison “understood freedom of speech as a type of property right inhering in individuals,” not as a civic republican concept (John O. McGinnis, “The Once and Future Property-Based Vision of the First Amendment,” University of Chicago Law Review 63 [Winter 1996]: 49–132; see pp. 64–67).

But Alexander’s desperate attempt to expose Jefferson and Madison as closet civic republicans is merely illustrative of his more general attempt to create a vibrant civic republican tradition out of an incoherent mush of multiple, superficially related theories. Indeed, in this unsuccessful project Alexander is scarcely alone: other advocates of republicanism have similarly failed to articulate a coherent tradition or definition of republicanism (see Daniel T. Rodgers, “Republicanism: The Career of a Concept, Journal of American History 79, no. 1 [June 1992]: 11–38).

Alexander’s definition of republicanism is no more illuminating than his predecessors’; he seemingly equates republicanism with little more than enmity toward the market and favor of greater government power and regulation. Alexander contrasts the private, selfish interests of the market with an idealized, selfless, deliberative process of politics. “The concept of the common weal, moreover, was understood to have substantive meaning,” he writes. “The public good was not understood as simply whatever the market produces, for the market was viewed as a realm in which individuals were too vulnerable to the temptation to act out of narrow self-interest rather than, as proprietarian principles required, for the purpose of maintaining the properly ordered society” (p. 2). Alexander is especially indignant toward those who would visualize public regulation of private property through a public choice lens. Reflecting on the regulation of private property in pre-nineteenth-century America, he writes,

All of this state regulatory activity reflected the proprietarian understanding that certain activities and certain resources should not be left to regulation by the market, for the market could not assure that the proper social order would be maintained. State regulation, moreover, was not understood as a response to particular interests engaging in what economists call “rent seeking,”

but to public-spirited individuals acting for the public good (p. 9).

Alexander’s rejection of selfish motives for political action makes it impossible for him to distinguish true civic republican thinkers from those who merely dress naked self-interest in the garb of self-serving civic republican rhetoric. For instance, he claims apologists for slavery for the civic republican tradition, seeing their justification for the ownership of human beings as a sincere attempt to resolve the dialectic of commodity and propriety in American property law. He writes:

The foundation for this new and unsurpassed social order was slavery, the South’s “peculiar institution.” More precisely, the foundation was the conception of slaves as a unique form of property. Though they could be used as a commodity, slaves were not primarily valued for that function. Their core function, rather, was to anchor and maintain the stability of the proper and preordained social hierarchy. It was the preservation of that hierarchy, not the production of wealth, that was the vital interest of slaves-as-property system. (p. 215)

Alexander is eager to enlist the apologists for the Southern slave system in his camp: “The theoretical foundation for this hierarchical [slave-based] society was not feudalism, as some have suggested, but civic republicanism” (p. 216).

Republican justifications for slavery simply cannot be taken seriously when compared to economic and public choice explanations. Alexander recognizes that the actual behavior of Southern slave owners bore little resemblance to their self-proclaimed high-minded ideals; Southern slave owners treated slaves like any other economic commodity, buying and selling them for economic gain. He admits, “Virtually without exception, [theorists of slavery as a social system] approved the market-exchange of slaves as a means of creating wealth” (p. 237). In short, the actions of Southern slave owners in treating slaves as commodities belied their contemporaneous verbal rationalizations that slavery was as much a republican social system as an economic system. Having characterized the market as the forum of self-interest and politics as the antidote, however, Alexander is now trapped. Forced to choose between taking the slave owners’ self-serving and implausible republican justifications at face value and admitting that their political rhetoric was motivated by the same self-interested impulses that he deplores, he chooses the former.

In the end, Alexander’s attempt to construct a dialectic between his two visions of property fails. He has written a book describing the views of some dissenters from the dominant American view of property as commodity. A dialectic requires two evenly balanced and coherent positions. The thinkers described by Alexander are an incoherent grab-bag of minor and uninfluential thinkers of varying quality who do not constitute a coherent philosophical or legal tradition, but rather a desire to justify governmental incursions on liberty and private property rights. Some actually may have been sincere civic republicans; most simply mouthed republican jargon as a cover for private rent-seeking. Few of them added anything valuable to the historical and contemporary debate over property. Send these guys back to the footnotes, where they belong.