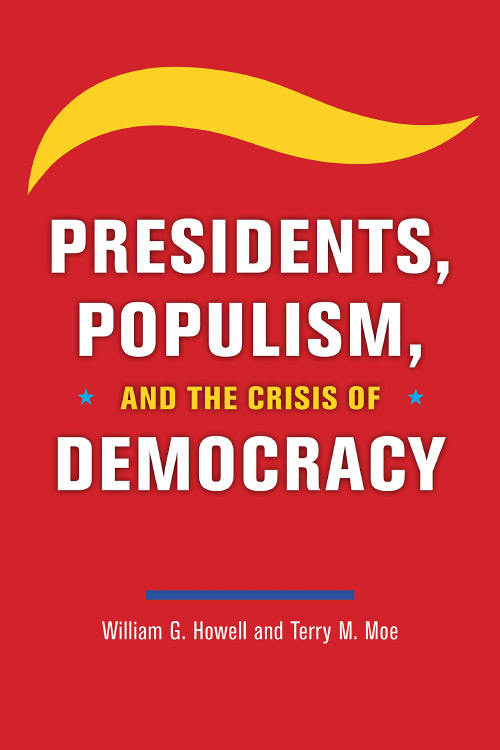 Presidents, Populism and the Crisis of Democracy
By William G. Howell and Terry M. Moe
eTextbook Hardcover Paperback Audiobook
This book review is a web exclusive for the Fall 2021 issue of The Independent Review.

The latest book by political scientists William Howell and Terry Moe provides a valuable catalogue of the titular crisis of American Democracy, drawing on the scholars’ considerable expertise in both the history of twentieth-century American politics as well as the intricate workings of U.S. democratic institutions. The book is well-written and thorough, unafraid to face the depth of the contemporary challenge. I found myself more pessimistic about the near future after having finished the book, the last paragraph of which begins “The Athenians were right. Democracy contains the seeds of its own destruction. In the United States, those seeds are now bearing terrible fruit” (p. 219).

They argue that the only way out of this mess—the only way to head off the democracy-wrecking threat of populism—is to provide more effective governance, to reform our institutions with the end of delivering to people what they demand. The authors cite two prior instances in U.S. history where the populist threat was co-opted through institutional reforms that enabled more effective, responsive governance: when the Republican Progressive reformers William McKinley and Teddy Roosevelt headed off the populist threat of William Jennings Bryan; and when Franklin Delano Roosevelt’s New Deal policies helped the country withstand the Great Depression rather than ignoring the poor and allowing them to coalesce into a destructive populist movement. Over the past few decades, the United States lacked the long-sighted democratic leadership to make analogous reforms and adjustments, producing the current populist backlash. Where have the Roosevelts gone?

The authors make a compelling case that the U.S. Constitution, that all-too hallowed backbone of our democracy, has hamstrung the legislature through the structure and rules of Congress. Further, the Constitution forces would-be institutional reformers to achieve levels of super-majoritarian support that are unimaginable in the contemporary hyper-polarized political climate. Although this argument is well-taken and the historical case fleshed out competently, the authors recently delivered an even more effective version of the same in their 2016 book Relic: How Our Constitution Undermines Effective Government—and Why We Need a More Powerful Presidency(New York: Basic Books). They have reinforced my view that the Constitution is “suffering from success,” that the fact that it was so well-designed for the tiny, agrarian original thirteen states means that it is necessarily ill-suited for the United States of 2021. The authors have had enough of the civil religion of Constitution-worship, telling followers to “get up off your knees and see it for what it is: a byzantine structure of government, designed for a bygone era, that is disastrously ill-equipped to deal with the problems of modern society” (p. 219).

Howell and Moe do not get bogged down with the sometimes-tortured conversation about the precise scope of “populism,” and neither will I. But one key conceptual question should be addressed. In 2016’s Democracy for Realists: Why Elections Do Not Produce Responsive Government(Princeton: Princeton University Press), Chris Achen and Larry Bartels set out to dispel the other face of American civil religion: faith not in the Constitution but in the idea of democracy, that reforms that place more power in the hands of the people bring us closer to the true heart of democracy, both an end itself and a means for better policy.

European populists “favor forms of democracy—direct votes of ‘the people,’ strongman actions by populist leaders—that circumvent the usual democratic procedures and norms to ensure that ‘the people’ get what they want” (p. 37). Without the scare quotes, this sounds like exactly the kind of reformed governance that Howell and Moe themselves endorse. The Electoral College—“a grossly undemocratic provision” (p. 115); “an antidemocratic relic” (p. 208)—was designed so that the President would be chosen by “elites rather than directly by the people” (p. 22).

In one of the historical U.S. cases, the Progressive reformers “brought the Senate under direct democratic control,” (p. 25) in an instance in which the usual democratic procedures and norms were circumvented in favor of the direct votes of the people.

My understanding of this historical case suggests that this reform paved the way for further nationalization of politics; a Senate that is more beholden to the specific concerns of the voters in their home states would be difficult to divide in today’s strict party discipline, and the most important anti-majoritarian institution of the current moment, the filibuster, would better serve its original function.

This is an intractable problem, one of which the authors are clearly aware and which dates back to the Athenians. My point here is simply that Howell and Moe appear to be making too much of the distinction between “the people” and the people; populism is thriving in the U.S. because of institutions that raise the threshold for governing a few percentage points above the 50% (of voters) threshold. It is not difficult to imagine a world in which Trump won 3 million more votes than did Clinton in 2016 rather than vice versa, in which case we would have to accept the simple majority (of voters) as granting the mandate for expansive action, for “effective governance” to give those voters what they desire.

At the same time, however, the authors generally seem to endorse the opinions and wisdom of “experts.” This presents one of the book’s serious blind spots: a lack of what sociologists call “reflexivity.” The standard populist move is to pit “the people” (scare quotes) against “the system,” which is “essentially the entire status quo—its democratic institutions, the elected representatives and bureaucrats and experts in charge, the established political parties, and the mainstream media” (p. 9).

Reflexivity requires experts like Howell, Moe, myself, and my esteemed reader to understand that we are not gazing from an ivory tower over a troubled landscape: we are active participants in this struggle. And the populists have us squarely in their sights.

Reflexivity further suggests that the diagnosis be turned back onto the doctor: our system of expertise and the legitimation of information is itself a relic of a previous techno-social context; the populist anger at the mainstream media and our system of experts is justified because we have failed to adapt with the times. We desperately need to modernize our own institutions, to improve our own practices, to regain the public’s trust.

The shock of globalization is one of the macro-scale trends destabilizing the postwar socioeconomic bargain. This is presented as inevitable: “nothing can be done to halt globalization or technological innovation” (p. 11). But it was anything but inevitable. Neoliberal politicians from both parties embraced globalization, promising that the gains from trade would allow the losers from trade to be compensated and for everyone to thus be made better off. This was the expert consensus.

“Virtually all economists agree that tariffs are bad for the economy ... Trump simply ignores the experts” (p. 95). From the perspective of the losers from globalization, the people who were promised compensation but received nothing due to ineffective governance, the experts were wrong. The economists who were living in a fantasy world of effective governance must be implicated in the contemporary backlash driven by globalization’s losers. To be clear, I agree that Trump’s tariffs were little more than political theater—but we still could stop or at least slow globalization. Indeed, to accept that the U.S. voter is incapable of doing so, one might have to grant some credibility to the fringe conspiracists arguing that multi-national corporations and a cabal of “globalists” run the world. Turning the tide of globalization would certainly be costly, but to accept it as impossible is a triumph of “capitalist realism” over democratic autonomy.

The solution is to take nothing for granted; rather than accepting either our institutions or the scope of our policies as inevitable, we need more pragmatism and responsiveness. But who, exactly, is going to lead the charge?

The United States government is a relic composed of relics; the median age of the House of Representatives and Senate has never been higher, and President Joe Biden is one of the oldest politicians to ever be elected head of state.

One of the common-sense reforms that the authors mention in passing is that “Lifetime appointments to the federal judiciary need to end, in favor of shorter terms that allow judicial opinions to better reflect a changing society” (p. 208).

This is my preferred diagnosis of the current crisis: the “Boomer Ballast” produced by this historically large and powerful generation overstaying its welcome at the commanding heights of U.S. politics, economics and culture is in direct tension with the fact that the most significant revolution in information/communication technology since Gutenberg is allowing younger generations to rapidly develop alternative institutions.

This topic is, in my (admittedly partisan) view as a scholar of digital media and politics, given short shrift. Among the many pages recapping the trials and tribulations of the Trump presidency is one page that reflects the authors’ pearl-clutching naivety about the realities of contemporary digital politics.

In fact, the importance of this development was extremely easy to overstate, as evidenced by the frequent overstatement of the importance of this development by Democratic partisans and the left-leaning media. Foreign interference in elections is ubiquitous, and the United States government is among its most enthusiastic and adroit practitioners—including in the use of digital influence campaigns. The years-long frenzy over Russian tweets (“some 1.4 million separate tweets” (p. 132), we’re told) did orders of magnitude more harm to the legitimacy of our elections than did the tweets themselves.

Given the growing and dynamic importance of digital politics, our institutions of knowledge-making must be reformed to promote effective policy. That is to say, the core argument in Presidents, Populism and the Crisis of Democracy is a sound one; academics should push for institutional reform in both our electoral politics and our knowledge systems.