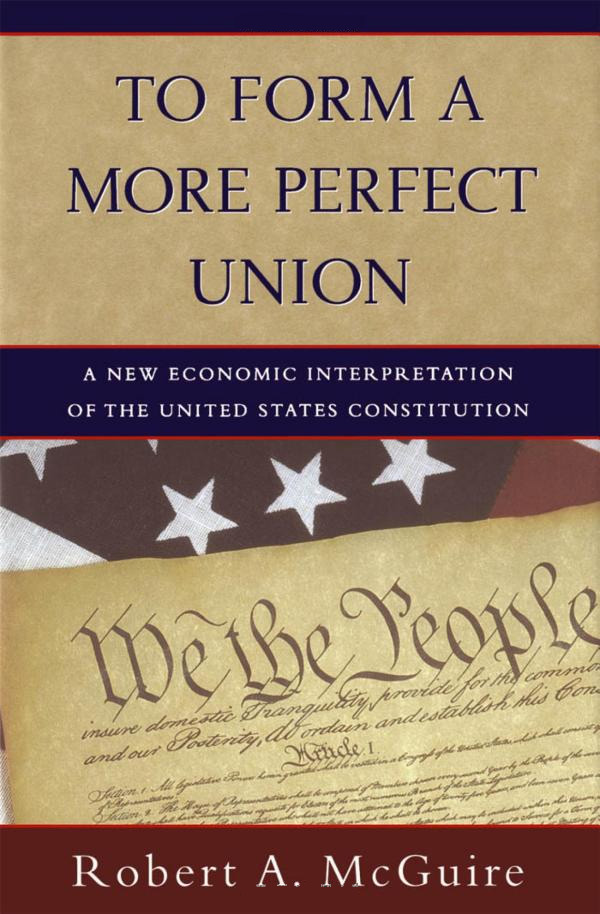 To Form a More Perfect Union
A New Economic Interpretation of the United States Constitution
Robert A. McGuire
Hardcover
This book review appeared in the Winter 2003/04 issue of The Independent Review.

In To Form a More Perfect Union, Robert A. McGuire attempts to provide the first solid modern analysis to quantify the impact of the personal economic interests of the Founding Fathers on the structure and content of the U.S. Constitution. Readers familiar with the literature in this area will immediately, and correctly, associate this book with Charles A. Beard’s Economic Interpretation of the Constitution of the United States (New York: Macmillan, [1913] 1935). In that book, Beard concludes that the delegates’ personal interests shaped their behavior with respect to the drafting and the ratification of the U.S. Constitution. ‘His hypothesis was generally accepted until the 1950s, when most scholars began to question the analysis. An onslaught of counterevidence came during the 1950s and early 1960s, and today most academics believe that Beard’s original interpretation was too narrow and that the general political philosophies of the Founding Fathers had greater importance in determining the nature and contents of the U.S. Constitution.

McGuire essentially resurrects Beard’s hypothesis and offers substantial evidence in favor of the view that the Founding Fathers’ personal interests had a significant influence on the process of constitutional design and ratification. In light of the substantial body of empirical evidence this book provides, it is likely to bring the personal interest view back into widespread acceptance among academics. Although McGuire draws some of the analysis presented in the book from his previously published journal articles, at least half of what he offers is new and original. What makes the book so compelling is the use of today’s significantly better empirical methodology to analyze data, in contrast to the techniques available during the 1950s, when the counterevidence to Beard’s hypothesis was presented.

Readers searching for a middle ground in the debate over whether personal self-interest shaped the U.S. Constitution will find refuge in this book. McGuire repeatedly makes clear that these personal interests were relevant at the margin in the Founding Fathers’ decision calculus and that many other factors (such as general political philosophy) influenced these individuals’ overall behavior. Among the most compelling findings: (1) personal interests played a bigger role in the specific content of the U.S. Constitution than in the document’s overall design; and (2) the framers’ debt holdings and slave ownership and the degree of commercialization in their local communities are significantly correlated with their observed behavior and, hence, with the content of the constitution they produced.

After providing a solid review and interpretation of the historical literature in chapter 1, McGuire develops the main theoretical voting model (later to be estimated) in chapter 2. Then, in chapters 3, 4, and 5, he offers a significant portion of evidence for his thesis whereby he quantitatively examines the voting behavior of the individuals present at the Philadelphia Constitutional Convention of 1787. He generally employs some type of limited-dependent-variable model with variables reflecting the personal characteristics of each delegate and his constituency. In chapters 6 and 7, he undertakes an empirical analysis of the voting that occurred during the ratification processes at the thirteen state conventions that met to ratify the new U.S. Constitution.

One of the book’s strengths is the amount of underlying background data and statistics provided. For example, McGuire includes tables that show not only each individual delegate’s vote on an issue (the data used for the dependent variable), but also the predicted probability of a yes vote for that delegate from the estimated logistic regression model. As anyone who has estimated a logistic regression model knows, it is possible for these models to fit well overall but still do a poor job of predicting individual votes. Throughout the book, however, McGuire provides the evidence necessary to comfort readers worried about such potential problems. The book’s main weakness is that at times it becomes rather lengthy and dull, but this aspect is simply a cost of being thorough, which is necessary in this case because of the controversial nature of the theory being tested.

For the great number of readers who are likely to use the results of the book as a single-sentence footnote or reference in their own research, the eleven-page prologue provides all of the background and summary information necessary to make an informed citation of the work. The remaining three hundred or so pages merely fill in the sufficient details to support these conclusions. In that sense, the book reminds me somewhat of Bjorn Lomborg’s Skeptical Environmentalist (Cambridge: Cambridge University Press, 2001).

Had I been a reviewer for the book prior to its publication, the only suggestion I might have offered to improve it would have been for the author to include a fuller discussion of the debate surrounding the adequacy and structure of the document that preceded the U.S. Constitution, the Articles of Confederation. I have in mind here not only the works in constitutional economics that compare the two documents (for example, Randall G. Holcombe, “Constitutions as Constraints: A Case Study of Three American Constitutions,” Constitutional Political Economy 2 [fall 1991]: 303–28, which is cited in McGuire’s book but not discussed in the manner suggested here), but also the literature on the adequacy of the Articles for financing the U.S. government by means of state requisitions rather than by taxation (see Russell S. Sobel, “Optimal Taxation in a Federal System of Governments,” Southern Economic Journal 64 [October 1997]: 468–85; Russell S. Sobel, “In Defense of the Articles of Confederation and the Contribution Mechanism as a Means of Government Finance,” Public Choice 99 [June 1999]: 347–56; and Russell S. Sobel, “Defending the Articles of Confederation: A Reply to Dougherty,” Public Choice 113 [December 2002]: 287–99). Had McGuire presented this discussion, he would have provided a fitting framework in which to view the Founding Fathers’ choices as marginal institutional changes relative to the existing constitutional order.

To Form a More Perfect Union undoubtedly will elicit additional research in this highly debated area of constitutional research. Future research will benefit from the 122 pages of raw data and empirical results provided as appendix material. McGuire’s book most likely will meet with a better initial acceptance than Beard’s book received (it was banned from high school libraries in Seattle and condemned by President Taft and by the president of Beard’s own university).

One important implication of McGuire’s book is that the condition of a Rawlsian “veil of ignorance,” putatively necessary to produce a “just” social contract, is not and cannot be satisfied in reality. Any constitution or social contract will be shaped by its designers’ individual self-interests. Modern public-choice scholars who favor theories based on the premise of methodological individualism will find comforting reassurance as they read To Form a More Perfect Union.