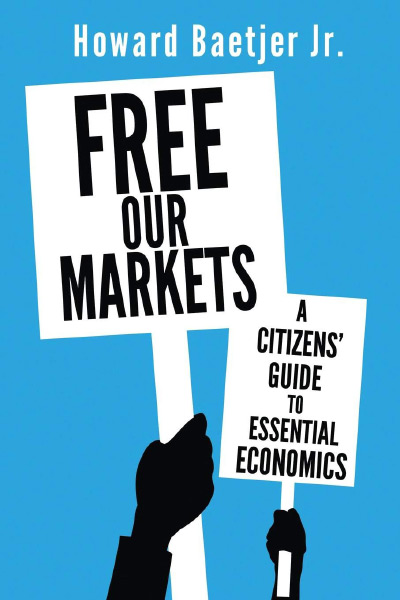 Free Our Markets
A Citizens’ Guide to Essential Economics
Howard Baetjer Jr.
Kindle Paperback
This book review appeared in the Summer 2014 issue of The Independent Review.

A problem many books have when making the case for free markets is that the first half of the book explains how markets work, while the second half contradicts the first when the author proposes a menu of policy prescriptions. This book does not make this mistake. The explanations of the price system, profit and loss, and property rights are excellent and are consistently applied throughout.

The first part of this book should be required reading in an economics survey course. It is an excellent explanation of the marvel of the free-market price system. Howard Baetjer Jr. (Department of Economics at Towson University) weaves together insights from Leonard Read (I, Pencil, Foundation for Economic Education) and F. A. Hayek (“The Use of Knowledge in Society,” American Economic Review 35 [September 1945]: 519–30) with discussions of the evolutionary nature of market competition a´ la Armen Alchian (“Uncertainty, Evolution, and Economic Theory,” Journal of Political Economy 58 [June 1950]: 211–21) and creative destruction per Joseph Schumpeter (Capitalism, Socialism, and Democracy [New York: Harper & Brothers, 1950]).

The exposition is broken into three fundamental principles. (1) Market prices coordinate economic activity by transmitting usable knowledge dispersed throughout an economy. This is referred to as the “price coordination principle.” (2) Profit and loss guide entrepreneurs to use resources effectively as they seek to serve others—the profit and loss guidance principle. (3) Private-property rights and free exchange provide better incentives than government to use resources to benefit others. Baetjer refers to this provision as the “incentive principle.” An understanding of the first principle is the most important, largely because it is always the most poorly understood by nearly everyone. Hayek was right when he mentioned that the allocation of resources in an economy is not the economic problem that we must solve. This unfortunately is the focus of a majority of today’s principles of economics courses. How to make the best use of decentralized knowledge is the actual problem, and as Hayek and this book eloquently explain, prices are the answer.

As Baetjer elaborates later in the book, an appreciation for the second principle was largely absent during the recent financial crisis. The knowledge problem informs us that experts, no matter how brilliant, cannot plan an economy. However, individuals can make plans with local knowledge, prices, and, most important, the feedback from profit and loss. Profit and loss form the system whereby we discover how to use resources to create the most value for everyone. It’s not an ideal system, but it is pretty darn good. And here the author stresses the importance of loss. Loss provides the proper incentive to ensure that entrepreneurs creating less value than the resources used are stopped. This is the point that was poorly understood during the financial crisis. Bailouts ruin this feedback loop by subsidizing the very firms that are producing the least amount of value for everyone.

Here Baetjer points out an even more useful feature of profit and loss. It is an entrepreneurial discovery system. Entrepreneurs have guesses or visions of what the future will be. Those that are more often correct whether through skill or luck are rewarded with profits. Those that aren’t are discouraged with losses.

With this in mind, the author’s answer to the question “Can profits be too high?” is simple: no. There is no such thing as too much profit. He correctly points out that profits are fleeting. Just as high prices tend to lead to lower future prices, high profits lead to lower future profits through imitation and competition.

There is an additional aspect to profits that Baetjer avoids. He mentions that many people have moral objections to profits that they think are too high, but he then declines to make the moral case for profits in a free-market system. This is unfortunate because the moral case is more important and more convincing. A voluntary free-market system is more moral than any type of system that involves coercion—that is, government involvement. There is more justice and human flourishing in free enterprise than in a system run by government, even if that government is using its coercive powers “only” to “do good.” Markets provide incentives for self-interested people to be just; governments tempt self-interested people to be unjust.

The second part of the book explains some of the insights of public choice. The author correctly illustrates the most fundamental of these insights: if people are selfinterested in markets, they will be self-interested in government. Angels’ wings are not conferred on those who work in government. One must understand the incentives facing people in markets and the incentives facing people in government. The comparison between imperfect markets and a perfect government is a false comparison. Sure, markets are imperfect, but, as Baetjer points out, government is even more imperfect.

A discussion of regulation and licensing illustrates this point well. It is argued that regulations are the shield that protects the public from quack doctors and people selling elixirs that cure all ailments. Reality, however, tells a different story. Anticompetitive intent, regulatory capture, and the special-interest effect provide a better rationale for the existence of regulation, licensing, and government intervention. To regulate an industry, one must have experts that know the industry. Naturally, these people come from the industry itself. Also, companies that must comply with the regulations have a large incentive to make sure the regulations favor them. The people whom the regulations are designed to protect have little incentive to shape the regulations, nor do they have the knowledge to do so. The knowledge problem favors those being regulated, as does the phenomenon of concentrated interests and dispersed costs. This same issue drives the special-interest effect. The author explains how this occurs in a democratic decision-making process. Special interests will always have the upper hand when regulation is left to government.

Baetjer goes on to make a convincing case for the self-regulating properties of markets. This is one of those unknown aspects of markets: everyone engages in the self-regulation of markets, yet most are unaware of it. Ask someone how they would find a dentist when moving to a new town, and they’ll tell you they get recommendations from people. Hardly anyone cracks open the yellow pages and randomly picks someone from the dentist section. Reputation is a much stronger regulator of quality than licensing. Future profits provide a powerful incentive for sellers to maintain a reputation of providing quality goods or services. The existence of many sellers is also a more effective means of ensuring quality than using government. This highlights an irony of government intervention: regulation and licensing restrict the number of people who can provide a good or service, thereby reducing the discipline of market competition.

A public-choice insight that would have enriched this topic is Bruce Yandle’s bootleggers-and-Baptists theory of regulation (“Bootleggers and Baptists: The Education of a Regulatory Economist,” Regulation 7, no. 12 [1983]: 12–16). The Baptists are the do-gooders who sincerely want to ban something that they feel is bad for society. The bootleggers use the Baptists as cover to gain government protection for their particular enterprise. Much regulation in effect today can be explained by this theory, so a discussion of this theory would have been a good addition to this section of the book.

The third part of the book is, in my view, the weakest. Baetjer dissects the events of the recent financial crisis with insights from earlier in the book. What led up to and what happened during the financial crisis are a textbook example of the consequences of market interventions by government. And here the author does a fantastic job of explaining the important aspects and pieces of the financial crisis. It is a thorough explanation, and my only quibble is that his analysis could have expanded the role played by the three credit-rating agencies. But this is not why I think the third part is the weakest of the book. It is the weakest part because it is vastly more complicated than any other part. Casual readers will stay with the author through parts one and two, but there is a good chance they will become bogged down and lose interest upon encountering chapters on mortgage-backed securities, Fannie, Freddie, Basel Accords, capital-to-asset ratios, and the merits of free banking. Perhaps a different economic episode could have been used to highlight what happens when governments intervene in markets.

An additional topic included in this part probably should have been moved to a second book. Baetjer correctly argues that it is difficult to explain the Federal Reserve’s mistakes regarding interest-rate policy leading up to the financial crisis without discussing the role that interest rates play in coordinating the actions of savers and borrowers. The Fed’s actions hamper and disrupt this coordination. As an alternative, the author spends a considerable amount of time discussing free banking. This choice adds to the complexity that already characterizes this section. He might have been better served mentioning free banking and then referring interested readers to the research of Lawrence H. White and George Selgin.

The book finishes on a good note with a discussion of what could happen if markets were allowed to function in the field of education. Here I think the author sows fertile ground for most readers. Few people would disagree that our current government-run schools are failing to provide adequate education. And most would agree that any market solution would be better than what we currently have. The typical objection to privatizing education is that the poor would be left in underperforming schools or not be able to attend at all. Here Baetjer makes a very compelling case that those objections are unreasonable. First, charity and private organizations will work to ensure that the poor are able to attend private schools. The author uses his own experience of serving on the board of just such a charity as well as examples from privatizing education in different areas around the world. Second, competition among schools for students will ensure a minimum level of quality, just as it does in every other market. Not every consumer needs to find the best deal. If enough do, a quality education will be found at all schools.

Despite the complexity of the discussion of the financial crisis, this book is perfect for someone wishing to understand how markets work and why they are preferable to government interventions. If enough people read this book, it would go a long way toward reducing the economic illiteracy that exists today. For those who teach economics, this book would make a great companion text in an economics survey course. In order to educate people about markets, one must explain the topic well and find a way to get the explanation into the hands of most people. Free Our Markets achieves the first goal. The second goal is a little more difficult.