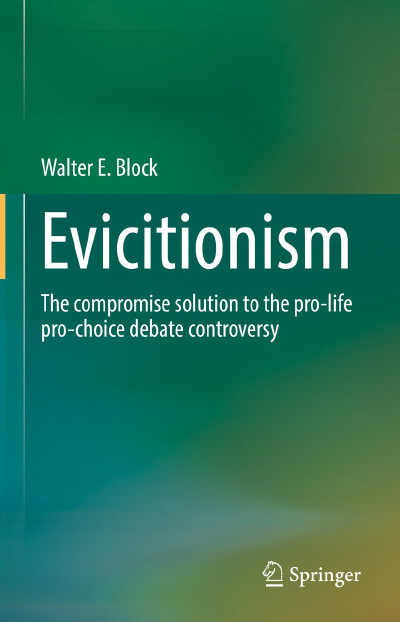 Evicitionism
The Compromise Solution to the Pro-life Pro-choice Debate Controversy
By Walter E. Block
Kindle Hardcover
This book review is a web exclusive for the Summer 2022 issue of The Independent Review.

The problems with this book begin on the cover and title page, where the term that Walter Block has coined for his proposed compromise on abortion, evictionism, is misspelled. Before identifying the other problems with the book, I should describe the author’s purpose, the book’s organization, and its setting in related literature.

To his credit, Block is trying to find a way to reconcile differences between those who regard abortion as a fundamental right and those who regard it as an abomination. As can be seen by people on both sides of the issue, the Roe v. Wade Supreme Court decision and subsequent decisions such as Planned Parenthood v. Casey did not settle the matter. In fact, it is likely that these Court decisions made the issue more starkly contentious by declaring abortion a Constitutional right and doing so on flimsy legal and scientific grounds. I doubt however, for reasons that I will explain, that many would accept the compromise suggested by Block.

The compromise, evictionism, is based on two principles, one of which appeals to the pro-choice side and the other to the pro-life side, and both of which comport with Block’s commitment to libertarianism. His use of these principles is not an exercise in “let us assume.” Block believes in both. On the pro-choice side, Block believes that persons have absolute property rights over their bodies. From this is derived the non-aggression principle—“people may act in any manner they wish, except they may not initiate, or threaten, violence against anyone else, or their legitimately owned property” (p. 4). On the pro-life side, Block believes a new human life begins at the moment of conception. From the moment of conception on, changes that occur in the human zygote, embryo, infant, child, and adult are biological development and ultimately decay. There is no qualitative difference between humans two days after conception and at the age of twenty. Block believes that killing an innocent human without the person’s consent is a grave violation of the non-aggression principle and their property rights. He rightfully calls this murder, regardless of the age of the person who is killed.

Block does not believe in positive rights, i.e., rights to something such as food and shelter, education, or life. For him, there are only negative rights which are all subsumed in the right to property. Following John Locke’s homesteading theory, a person establishes rights over unowned property by applying labor to it. So, for instance, if a person clears and cultivates open land the land becomes that person’s property. Thereafter, every use of the property by anyone other than the owner requires the owner’s consent. With regard to abortion, a pregnant woman owns her body. A baby’s continued residence in the mother’s womb requires her consent. She may evict an unborn baby, but she may not kill the baby or have it killed.

Block views the current practice of abortion as consisting of two distinct and separable acts, eviction and killing. He would allow the first and prohibit the second. A mother may evict a fetus before or after viability. If evicted before viability, the fetus will die. But by Block’s account this is not an injustice, for the fetus has no positive right to life, only a negative right not to be killed. In the case of a viable fetus, Block assigns to the mother responsibility to transfer her guardianship right, which she acquired at conception, to someone else. This presumes that there is someone who desires to become the baby’s guardian. Block argues that this obligation of the mother is not the obverse of a positive right of the baby to have a guardian or of others to have guardianship over the baby. Once again, there are no positive rights, in Block’s account. The mother’s obligation is instead the obverse of others’ negative right not to be forestalled by the mother from becoming the baby’s guardian.

Evictionism is set within two bodies of literature, libertarian literature on law and the literature on the ethics of abortion. It is structured as a dialogue between Block and other authors who have written on both sides of the abortion debate, with Block responding to their arguments for or against abortion. His standard for evaluating their ideas is the libertarian principle of absolute property rights as the only right and the scientific fact that life begins with conception. For authors to merit Block’s approval they would have to recognize and endorse evictionism. He begins with two fellow libertarians, Murray Rothbard, who was “pro-choice” and Ron Paul, who is “pro-life.” Block judges that both have flawed arguments, as do each of the other authors with whom he engages. Some of these are fellow libertarians and some are not. They are from the fields of philosophy, sociology, and political science. They include Ayn Rand, Doris Gordon, Mark D. Friedman, Jan Narveson, David Boonin-Vail, Francis Beckwith, Eileen McDonagh, Patrick Lee, Don Marquis, and Michael Tooley. In some cases, the authors have engaged with Block by reacting to his previous publications on libertarianism and abortion. In others, Block cross-examines authors who wrote without having his work in mind at all.

The problems are in both Block’s proposed evictionism as a compromise on the abortion issue and with the presentation in the text. There are two problems with his proposal. First, Block offers no suggestion for how the putatively separate acts of eviction and killing a fetus can be separated. Most first trimester abortions are done by vacuum curettage. A suction tube with a sharp cutting edge is used to remove the fetus. Most second trimester abortions are done by dilation and evacuation. The fetus’s body parts are twisted and torn away with forceps. With both techniques, the baby is first killed and then “evicted.” Evicting without killing would require a totally new technique that does not kill the fetus. Block does not even acknowledge this as a problem, much less suggest what the new procedures might be. Nor does he give attention to the question of which of the two components of abortion, eviction and killing, is the primary aim for women who have abortions.

Second, Block’s analysis brings to light the thinness of his libertarian anthropology. The sole right that humans have is the absolute right to property, including their bodies. The only obligation humans have is to refrain from taking the property of others. Consent is the only glue that binds humans together in communities, and this binding is merely transactional. No community, not even the family, has ontological status. To the question “who are we?” Block can only answer that we are individuals. Parents have no obligations to their children, pre-birth or post-birth. If a mother may evict the fetus she carries; she may also evict her nine-year old daughter. For the nine-year old as for the fetus, if there is no one who desires to act as guardian, the child is on her own. Block explicitly rejects moral standards based on the Jewish or Christian Bible. The moment a child becomes unwanted by the parents he or she becomes a parasitic trespasser. “Parasite” and “trespasser” are the terms Block uses. Despite Block’s prohibition of murder, the libertarian world of his making is indeed nasty, brutish, and short.

In terms of presentation, the text is in sore want of editorial attention. I’ve pointed out the misspelling on the cover and title page. As we read through the book, we encounter other instances of sloppiness in thought and execution. Examples are:

Block’s libertarianism leaves unconsidered the question of what is so special about humans Why should we recognize property rights and abstain from aggression when other animals do not? Block does not tell us and by his premises he cannot. John Locke was in a better position than Block and other contemporary secular liberals, for Locke’s philosophy was not divorced from theistic Christianity. (See for instance, Diego Lucci, 2020, John Locke’s Christianity, New York: Cambridge University Press.) I will leave it to other libertarians to judge whether Block has done them a service or disservice. But he has not served his readers well.

J. Daniel Hammond
Wake Forest University
EconomyHousing and HomelessnessLaw and LibertyProperty Rights, Land Use, and ZoningRegulation
Subscribe Buy This Issue Get the App