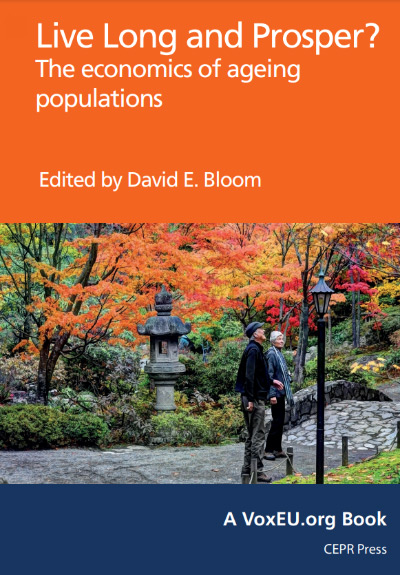 Live Long and Prosper?
The Economics of Ageing Populations
Edited by David E. Bloom
Get eBook
This book review is a web exclusive for the Fall 2022 issue of The Independent Review.

Several years ago, I asked economists “What will be the three most important economic challenges facing the United States over the next sixty years?” (Robert Whaples, 2006, “Collapse? The ‘Dismal’ Science Doesn’t Think So: Economists’ Views of the Future,” The Independent Review 11, no. 2: 275–81). The vast majority of economists predicted continued growth for the American economy, but half of them identified aging, Social Security, and pensions among the biggest economic challenges facing the nation. This was their greatest concern.

As baby boomers have entered their retirement year, the worry remains and intensifies. “Population ageing is setting off alarm bells all over the world. Some of the alarms take the form of apocalyptic visions of mass numbers of lonely, insecure, vulnerable, abused, and exploited older people, deprived of their dignity, fearfully vegetating in their rockers and wheelchairs, and in holding patterns waiting to die” (p. 9). Others warn about fiscal implosions, labor shortages, asset market meltdowns and crippling burdens placed on the young and middle aged. Can we “live long and prosper”—the title question of this collection of essays edited by David Bloom, the director of Harvard’s National Institute of Aging Demography Center? Will rising “dependency” ratios and increased spending on pensions and medical care for the elderly hamstring the American economy and economies around the world? Will the elderly sink into poverty? The answer is unclear.

A few of the authors are sanguine about the future. As Andrew Scott puts it, “we are ageing more slowly in terms of mortality risk and overall health” (p. 81), which makes conventional old age population dependency ratios misleading. He reports that a child born today in the UK has a one in three chance of living to be 100 and advocates policies that extend working careers.

Some of the authors in Live Long and Prosper? are especially pessimistic. Laurence Kotlikoff reports the results of a dynamic, 90-period overlapping generations, 17-region general equilibrium model. He estimates that the U.S. share of global GDP will shrink from 17% today to 5% at the end of the century. He also projects that the wage base will not expand to keep up with government spending on the elderly, necessitating an increase in the average rate of taxation of labor earnings from 34% to 51% by 2100. We could avoid this by scaling back commitments to the elderly, but “these cuts would need to be draconian and immediate if they are to prevent the implied draconian increases in taxes” and “gradual policies such as slowly raising the Social Security full retirement age will be too little too late” (p. 35). His predictions are sobering, but similar, well-grounded predictions have been made before and they haven’t moved the political needle. He warns of the “far-reaching geopolitical implications” (p. 35) of the drop in America’s share of global GDP. “In particular, the U.S will no longer be able to play the dominant ... role in policing global terrorism, in limiting nuclear proliferation, or in curtailing global carbon emissions (were that its desire). Whether it will accept its inevitable second-rate, if not third-rate status without lashing out at perceived rivals, militarily, remains to be seen. But the history of empires suggests they end with a bang, not a whisper” (p. 35–36). I don’t recall the British Empire ending with a bang, but his point is worth considering.

Andrew Mason, Sang-Hyop Lee, Ronald Lee, and Gretchen Donehower estimate that “moderately low” fertility rates, in the range of 1.6 to 2.0 births per woman, “need not lead to lower standards of living. But standards of living are likely to decline in countries with super-low-fertility, below 1.5 births per woman” (p. 128). Eighteen nations—including China, Japan, South Korea, Taiwan, Poland, Spain, and Italy—are already below this mark.

While boosting the total fertility rate has proven to be difficult, fixing the public pension system has been especially tough in the U.S. We seem to be locked into a Social Security system that discourages work across the age spectrum, reduces saving, and yields a low rate of return. Indeed, the lock-in was built into the system. Throughout their working lives, most employees bear payroll taxes (including the share nominally borne by their employers) equaling 12.4% of their labor market incomes and therefore feel entitled to benefits when they retire. The pay-as-you-go system then requires the next generation to pay into the system. Most economists favor consumption taxes over payroll taxes. To tax is to discourage and discouraging work reduces economic output more than discouraging consumption. Franklin Roosevelt heard these arguments and reportedly replied: “I guess you’re right on the economics. [The taxes] are politics all the way through. We put those payroll contributions there so as to give the contributors a legal, moral, and political right to collect their pensions and their unemployment benefits. With those taxes in there, no damn politician can ever scrap my social security program. Those taxes aren’t a matter of economics, they’re straight politics” (Source).

Is there a way out of our Social Security mess? The system’s costs have exceeded its income for over a decade and the gap is projected to reach about 4.5% of taxable payroll in coming decades (see Chart B here). Three obvious and widely discussed ways to close the gap are increasing taxes (not very popular), reducing benefits (political suicide?) and increasing the normal retirement age (which is a stealthy way of reducing benefits). However, John Laitner and Dan Silverman suggest a fourth channel—setting a maximum vesting period for Social Security (say, 34 or 40 years). After this period, “the worker would no longer face the old age and survivor’s insurance (OASI) payroll tax, his benefits schedule as a function of retirement age would be fixed, and he would not face any ‘earnings test’” (p. 133). This will substantially reduce the payroll tax rate for older workers, encouraging them to retire later. The loss of Social Security tax revenue will be more than offset by additional income tax (not payroll tax) revenue, which could be pumped back into the Social Security system, thereby extending its solvency—and increasing overall economic efficiency—if their projections are correct. Regardless of whether this particular proposal will work well, it is worthwhile to consider a wide range of changes that might prove to be win-win combinations. Unfortunately, as reported by Margaret McConnell and Uwe Sunde, both longitudinal and cross-sectional data imply that there is a “profound decline in the willingness to take risks at older ages” (p. 71). Perhaps we are locked into this dysfunctional system and are too timid to do anything about.

Ultimately, however, individuals play a more substantial role in preparing for old age and an aging society than the state could ever do for them. The collection closes with a chapter on “Happiness at Old Ages: How to Promote Health and Reduce the Societal Costs of Ageing” by Maddalena Ferranna, which reports that happiness protects individuals’ health and enhances longevity. It does so by both physiological processes and behavioral factors. Positive emotions have been found to improve immune, cardiovascular, and endocrine functioning and are linked to a move active lifestyle, reduced alcohol and tobacco use, and healthier diets. Are there public policies than can boost happiness? Perhaps. Perhaps not. But there are certainly ones that reduce happiness that could be removed. Ferranna argues that happiness in the elderly depends on three main factors: health, social connectedness, and engagement in social activities—and individuals clearly have it in their power to adopt more healthy lifestyles, increase social connectedness, and engage in social activities. Living long and prospering in the broadest sense of the term are greatly influenced by individual choices.