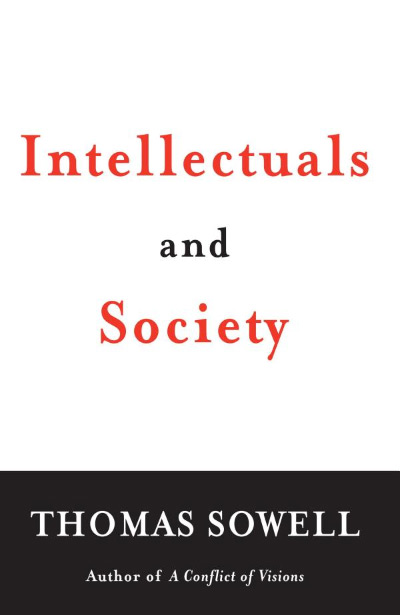 Thomas Sowell has written an insightful book, but Intellectuals and Society is riven by a fundamental tension. On the one hand, intellectuals wrongly view the free market as a zero-sum game. “Among the consequences of the economic illiteracy of most intellectuals is the zero-sum vision of the economy . . . in which the gains of one individual or one group represent a corresponding loss to another individual or another group. . . . [T]he widespread notion, coalescing into a doctrine, that one must ‘take sides’ in making public policy or even in rendering judicial decisions, ignores the fact that economic transactions would not continue to take place unless both sides find these transactions preferable to not making such transactions” (pp. 56–57).

Intellectuals fail to grasp a point that Ludwig von Mises made again and again: the market is the principal means by which people benefit from social cooperation. But who are these intellectuals who are so lacking in insight? Sowell draws a sharp distinction between people who produce goods and services and those who deal only with ideas: “At the core of the notion of an intellectual is the dealer in ideas, as such— not the personal application of ideas, as engineers apply complex scientific principles to create physical structures or mechanisms. . . . [A]n intellectual’s work begins and ends with ideas, however influential those ideas may be on concrete things—in the hands of others. Adam Smith never ran a business and Karl Marx never administered a Gulag” (p. 3, emphasis in original).

Because intellectuals work with ideas, they often overestimate the importance of conscious planning. They believe that just as they are able to devise solutions to their intellectual conundrums, so should society be guided by rational design. This view leads them to underestimate the potential of the free market, which relies on the dispersed intelligence of millions of people, coordinated through prices. Sowell, with characteristic skill at apt quotation, cites a number of remarks that show this attitude toward planning: “John Dewey, for example, spelled it out: ‘Having the knowledge we may set hopefully at work upon a course of social invention and experimental engineering.’ But the ignored question is: Who—if anybody—has that kind of knowledge?” (p. 18).

Intellectuals, then, underestimate the free market because its operation jars with their characteristic mode of thought. Well and good: but Sowell also views many intellectuals in a way that is in part at odds with the view just presented. Here, the problem with these intellectuals is that they reject the “tragic vision,” which sees the world’s problems as largely intractable. Sowell describes the tragic vision in this way: “‘Solutions’ are not expected by those who see many of the frustrations, ills, and anomalies of life—the tragedy of the human condition—as being due to constraints inherent in human beings, singly and collectively, and in the physical world in which they live. . . . In the tragic vision, barbarism is always waiting in the wings and civilization is simply ‘a thin crust over a volcano.’ This vision has few solutions to offer and many painful trade-offs to ponder” (pp. 77–78).

Sowell contrasts this tragic vision with a vision of society “in which there are many ‘problems’ to be ‘solved’ by applying the ideas of morally anointed intellectual elites” (p. 77). In this contrast, he ignores a principal thrust of his own work and thereby creates the tension I mentioned earlier. In the remarks just quoted, Sowell divides intellectuals into those who maintain that their ideas can solve the world’s problems and those who deny this claim, holding that these problems cannot be solved. How can this proposition be reconciled with his previous claim that the free market provides an opportunity for people to gain through social cooperation, a fact that many intellectuals fail to grasp? In this view, if we do not impede the free market, we are not doomed to tragedy. Adopting this view of course does not commit us to saying that all of the world’s problems can be solved, but if the free market has the benefits that Sowell attributes to it, a vast section of reality stands immune from the tragic vision that he defends.

Sowell is at his best, which is very good indeed, when he deals with the free market. He points out a fallacy in the complaints of many critics of the market who stress the unequal distribution of wealth and income in contemporary America.

Although such discussions have been phrased in terms of people, the actual empirical evidence cited has been about what has been happening over time to statistical categories—and this turns out to be the direct opposite of what has happened over time to flesh-and-blood human beings, most of whom move from one category to another over time. . . . [D]espite the rise in the income of the top 0.1 percent of taxpayers as a statistical category, both absolutely and relative to the incomes in other categories, as flesh-andblood human beings those individuals who were in that category initially had their incomes fall by a whopping 50 percent between 1996 and 2005. (pp. 37–38, emphasis in original)

Sowell’s skillful use of evidence emerges again when he confronts another popular charge against the free market. Many intellectuals complain about the control over markets exercised by large corporations. Sowell points out that these companies, far from restricting the choices available to consumers, expand the options open to them. A company that has acquired a large share of the market has done so by offering products that consumers prefer to those of their competitors. Further, “[a]ny number of companies that have been said to ‘control’ a majority of their market have not only lost that market share but have gone bankrupt within a few years of their supposed dominance of the market. Smith Corona, for example, sold over half the typewriters and word processors in the United States in 1989 but, just six years later, it filed for bankruptcy, as the spread of personal computers displaced both typewriters and word processors” (pp. 65–66).

Antimarket intellectuals often condemn the market in moralistic terms. Do not many businesses exploit the poor? Pay-day loan companies are a prime example. Do not these nefarious enterprises take advantage of those in desperate circumstances by charging exorbitant rates of interest? Sowell responds by exposing a misleading use of statistics. “Here verbal virtuosity is often used by stating interest rates in annual percentage terms, when in fact loans made in low-income neighborhoods are often made for a matter of weeks, or even days, to meet some exigency of the moment. The sums of money lent are usually a few hundred dollars, lent for a few weeks, with interest of about $15 per $100 lent. This works out to annual interest rates in the hundreds—the kind of statistics that produce sensations in the media and politics” (p. 46).

If the tragic vision does not offer the best way to think about the benefits of the free market, it by no means follows that this perspective is useless in other areas. Quite the contrary, Sowell argues effectively that foreign policy has often been bedeviled by utopian schemes that ignore human limitations. Disaster looms when intellectuals realize that the immense changes that war brings about provide them with an opportunity to put these schemes into effect. “John Dewey . . . saw war as constraining ‘the individualistic tradition’ which he opposed, and establishing ‘the supremacy of public need over private possessions’” (p. 207).

Sowell shows that many in the American Progressive Movement, in pursuit of their utopian vision, wished to extend the blessings of American democracy to “backward” people abroad. “The Progressive-era classic, The Promise of American Life by New Republic editor Herbert Croly, argued that most Asian and Africans had little chance of developing modern democratic nations without the superintendence of Western democracies” (p. 206).

Sowell is also appropriately skeptical of Woodrow Wilson’s decision to involve the United States in World War I. He wonders whether Wilson wished to enter the war as a “convenient occasion for launching an international ideological crusade. . . . Like many other intellectuals, Wilson depicted actions taken without material motives to be somehow on a higher moral plane than actions taken to advance the economic interests of individuals or the territorial interests of nations” (p. 209).

Given these opinions, one might have expected Sowell to be a mordant critic of the Bush administration’s Iraq imbroglio, but such proves not to be the case. Sowell, like many others, is in the grip of the supposed lessons of the Munich conference of September 29 and 30, 1938. In a historical sketch of British policy in the 1930s that relies on the speeches of Winston Churchill as a primary source, he draws the universal lesson that nations ought to resist dictators with foreign ambitions lest we find ourselves in a world conflagration. (This review is not the place to discuss British policy toward Hitler, but Simon Newman’s excellent March 1939: The British Guarantee to Poland [Oxford, U.K.: Oxford University Press, 1976] offers a scholarly account of the motives and methods of British policy that is entirely at odds with Sowell’s discussion.)

The “lesson” of Munich fosters a tendency to see every local Caesar as the next Hitler. Sowell fails to see that the Iraq War is exactly the sort of imperialist venture that Herbert Croly had in mind. Responding to critics of the recent “surge” policy in Iraq, Sowell remarks: “In short, General Petraeus was accused of lying . . . in the face of growing evidence from a number of other sources that the surge had substantially reduced violence in Iraq” (p. 270). Surely more is required to justify a war than the fact, if it is one, that a particular operation has reduced casualties. If Sowell lapses on this point, however, he has nevertheless written an excellent book as a whole.