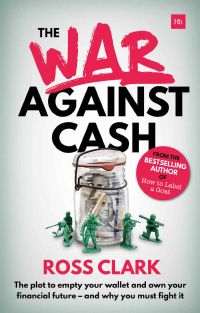 The War against Cash
Ross Clark
Kindle Paperback
This book review is a web exclusive for the Summer 2018 issue of The Independent Review.

The Spring 2018 issue of The Independent Review features William Luther’s critical review of The Curse of Cash by Kenneth Rogoff. Rogoff’s book is itself an act of war according to another new book, The War against Cash by British journalist Ross Clark. If this larger assault is to be repelled, it will be because of combatants like Clark.

Anti-cash warriors say that paper money is a relic of the past. It once served its purpose, but it’s time for it to go. It’s inconvenient. It fosters crime. It fosters tax evasion. It’s unsafe. And it hampers effective monetary policy. With considerable insight, Clark challenges these arguments about the hidden costs of cash and reminds us of its many benefits, often by analyzing his personal experiences. Ross opens the book by recounting wasting his time in a parking lot that only allowed for payment via a phone app and sensibly points out that if convenience is the name of the game then we should be given more options, rather than fewer—electronic payments AND cash. What happens to electronic payments when the power goes out? Or your bank’s systems go down? It’s nice to have a backup plan. A little cash can mean a lot of security.

Does cash really foster crime? Rogoff points to the fact that $200 million in cold hard cash was found in the home of Mexican drug king “El Chapo” Guzman when he was arrested in 2014. If criminals like this can’t use paper money to lubricate their enterprises will it hurt their business? Clark counters that El Chapo’s use of cash is largely a function of his age (he was born in 1957). El Chapo is old fashioned. He’s “the criminal world’s equivalent of your granny” (p. 78). The new guys don’t operate this way. Think about the most recent ransomware attacks. How many cybercriminals demand payment in cash? Any? The payments are usually in Bitcoin.

How much does tax evasion rely on cash? With modern conveniences like PayPal, it would be almost trivial for tax evaders—especially small businesses that try to fly below the radar—to operate without any cash. Distinguishing taxable income from other payments in an electronic world is virtually impossible. And there are legitimate reasons businesses prefer cash—with its low transactions costs and sureness of payment. Electronic payments make it easier, not harder, for bigtime tax evaders to transfer money offshore.

Is cash really unsafe? Rather, as Ross numbingly demonstrates, it’s electronic money that has much bigger security issues. In 2015 British bank customers lost about £755 million in fraud involving payment cards, online banking and the like. This despite the advertised benefits of the electronic trail for these transactions. Cybercrime has grown to eclipse the theft of fusty old currency. In Britain in 2014-15, 4.6 percent of adults reported falling victim to fraud involving plastic cards, while only 0.7 percent reported falling victim to theft from the person and 1.5 percent reported theft of personal property. Similarly, only 1.8 percent of U.S. households report any cash theft each year and the amount reported stolen is about $500 million—roughly $1.60 per person per year.

Does cash really wreck monetary policy? Rogoff argues that it does because it stops central banks from pushing nominal and real interest rates into negative territory in times of great economic slack. If cash is available, people will simply withdraw their deposits and put the cash in safety deposit boxes rather than having to pay a few percent each year to park their money in bank accounts. But Clark counters that negative interest rates are manifestly unfair—they sock it to prudent and patient savers. And even in a cashless world people can still remove their deposits and convert them into other assets. If so, buying assets doesn’t boost aggregate demand for newly created goods and services, so it doesn’t actually stimulate production.

Clark’s ultimate thesis is that the financial industry wants to drive cash into extinction because it makes more profit in getting a cut of each electronic commerce transaction. And, he demonstrates, it is bold enough to advertise a behavioral economics finding that “when people do not handle [physical] money, they do not feel the ‘pain’” (p. 31) of paying for something. He sees this as all part of a plan to get us to spend more than we really want to, so we’ll end up borrowing more and racking up more electronic payment fees. These fees are very regressive and are often truly hidden—as in they don’t show up at the time of purchase but you later see them on your bank statement. And even when businesses are the ones nominally paying these fees—average credit card fees in the U.S. are about 1.5 to 2.5 percent—basic economic theory predicts that in competitive markets (like most of retailing) higher costs are passed along to consumers. They want us to pay for using their cards and apps, but ultimately, “cash is what gives us power over the banking industry” (p. 55).

“In a cashless society we really wouldn’t be able to hide” (p. 130) and sometimes even honest people want to hide their transactions histories. Moving toward a cashless world makes it much easier for governments to surveille and control their populations—one reason that countries like China and Turkey are headed in this direction. If countries like these stop printing up money their citizens will have the option of using U.S. currency (as many of them do now). There is reason to suspect that the U.S. government won’t ally with the financial industry in its war against cash. Each year the amount of U.S. currency in circulation rises by about $80 billion—most of it from $100 bills. It costs about 12 cents to produce a $100 bill, so most of this $80 billion is pure profit to federal government. Why would the U.S. government want to walk away from this seigniorage? Governments don’t tend to give up such sure and easy sources of revenue. But what would happen if all governments stopped printing up currency? Clark points out that to some degree private moneys would arise to fill in the gap—because there would be a demand for it—although you can be certain that governments would move to block them.

It’s hard to disagree with Clark’s ultimate conclusion that we should fight boldly so that we don’t lose the war against cash. If we lose, “we will regret it” (p. 7). (Clark isn’t the only one to see this as war against cash. “The War on Cash” is also the title of Jeffrey Hummel’s lengthy review essay on Rogoff’s book (Econ Journal Watch 2017, 14, no. 2: 138-63).) “It is not that there is anything magical about cash” (p. 35), but after reading this book and thinking about a cashless world, it’s hard not to conclude that cash is worth defending.