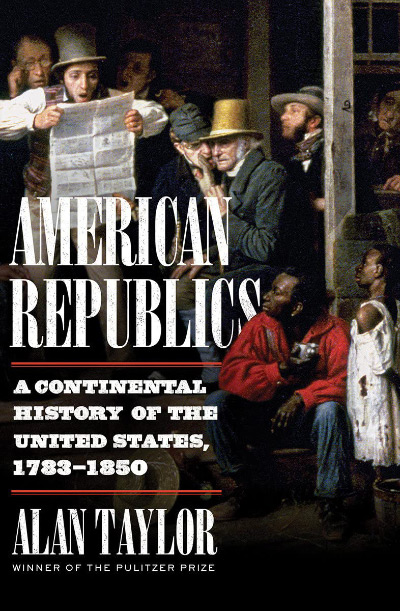 American Republics
A Continental History of the United States, 1783–1850
By Alan Taylor
Kindle Hardcover Paperback Audiobook
This book review is a web exclusive for the Spring 2022 issue of The Independent Review.

In a short but informative preface, Alan Taylor positions American Republics as a follow-up to American Colonies, his widely hailed history of colonial North America. Invoking Bruce Willis’s Die Hard movies, Taylor jokes that American Republics might be subtitled “Colonize Harder.” Taylor uses U.S. colonial expansionism as a framework to explain how in a little more than a half century between the American Revolution and the Mexican War, the United States expanded from thirteen colonies hugging the Atlantic seaboard to a continental power. The result is in many ways a compelling analysis of the greed, violence, and racism that were part and parcel of U.S. expansionism. American Republics’ framework of colonial expansion, though, is a far less satisfying account of internal developments in the United States, ultimately producing a somewhat uneven combination of a fascinating exposition of expansionism coupled with an underdeveloped account of other economic, social, and political developments.

Especially in the early period, Taylor’s global focus is fresh and exciting. The introduction, for example, provides short but compelling sketches of five national capitals: Washington, D.C., Mexico City, York (later Toronto), Port-au-Prince, and New Echota, the capital of the Cherokees. The rutted, muddy roads put the newly independent United States into context. These were weak, feuding states adrift in a world of powerful empires. Taylor captures the contingency and uncertainty of the early U.S., which seemed likely to fail. The French, Spanish, and British posed real threats, and helped make secessionist impulses in the trans-Appalachian West a real threat. The Constitution, Taylor suggests, was born much more out of desperation than idealism. The stronger central government helped restore the fledging republic’s finances and helped it recover from the lengthy commercial depression that followed the Revolution, but still faced powerful Indian confederacies who had help from the British and other rivals.

Taylor’s narrative sometimes falls into a rather pedestrian account of topics such as the first party system—it sometimes seems he is checking the boxes of the standard narrative—but he excels in narrating global conflict, expertly integrating character sketches and compelling vignettes into stories of war, empire, and diplomacy. He ranges far beyond the United States, showing the critical importance of developments in Europe, Haiti, Spanish Florida, Canada, and the Pacific coast. The War of 1812 marks an especially important turning point. Despite its rather inept military performance, the U.S. was the ultimate winner of the conflict. Native peoples could no longer pit European empires against the Republic; America’s overwhelming demographic advantage ultimately led to their forced removal and to expropriation of Native lands. Indian removal was particularly brutal in the South, where enslavers sought the cotton lands in Georgia, Alabama, Mississippi, and Florida.

The War of 1812 also marks a narrative shift in American Republics, as Taylor focuses more on the internal development of the U.S. He portrays the early republic as violent and illiberal. Whereas historians once used the concept “Jacksonian Democracy” as an important organizing principle, Taylor sees it in largely ironic terms. He portrays Andrew Jackson as a vindictive and violent authoritarian who repeatedly violated the rule of law in his quest for power. Jackson’s combination of brutal violence, deeply ingrained racism, and disregard for the rule of law spelled disaster for Native Americans, who were brutally removed from their ancestral lands. The destruction of Native Americans in the South, in turn, led to the expansion of slavery and the interstate slave trade. Jackson faced significant opposition, particularly among middle-class northerners who favored the more activist economic policies and moral reform of the Whig Party. Yet northerners were hardly united, and many small farmers, immigrants and working-class voters favored Jackson’s brand of populism. Northern cities, Taylor argues, were hotbeds of violence, where riots were common and mobs often ruled the streets.

It is no accident that Taylor’s Jackson sounds much like Donald Trump. Both men readily indulged in racist and often violent rhetoric while displaying a pronounced authoritarian streak. Yet Jackson, much like Trump, ultimately served entrenched economic interests despite his populist appeal. Jackson crusaded against the Second Bank of the United States (BUS)—the country’s only national bank that held the sizeable deposits of the federal government—as serving the interests of a privileged and corrupt capitalist aristocracy. Yet when Jackson vetoed the new charter of the BUS, he eagerly deposited federal revenues in favored state banks which were no less capitalist than the hated “Monster Bank.” The resulting orgy of speculation in land, slaves, and cotton contributed to the Panic of 1837 and years of hard times. In Taylor’s account, Jacksonian populism was ultimately a sham that hurt the small farmers and artisans it was supposed to help.

Taylor offers a powerful critique of Jacksonian Democracy that rightly highlights the political power of southern enslavers, the entrenched racism in both the North and South, the brutal removal of Native Americans, and the use of political power to reward favored economic interests. Yet even within this maelstrom of racism, violence, and expropriation, powerful and genuine liberal and democrat elements emerged, especially in the North. Northerners invested heavily in public education, participated in a growing and vibrant print culture, and built libraries at impressive rates. This highly educated population made use of an open and accessible patent system to become the world’s most inventive and innovative region. Inventors mostly worked in northern cities, which became dynamos of economic creativity, but many ordinary farmers flocked to agricultural societies and fairs to learn about improved seeds, new implements, and other ways to improve their farms. Taylor mentions some of these developments, but his account reads more like a textbook dutifully covering the standard narrative. “Colonize Harder,” so apt in describing U.S. expansionism largely fails to describe northern economic and cultural change.

Taylor’s downplaying of the Early Republic’s liberal elements is especially evident in his treatment of the abolitionists, one of the most significant social and political movements in American history. William Lloyd Garrison, like Frederick Douglass, receives a few pages of treatment, but it feels cursory. Taylor does not seem interested in explaining the emergence of a movement that advocated not only for the immediate end of slavery, but for racial equality. The abolitionists remained a small minority in the North; as Taylor highlights, they often suffered violence at the hands of their fellow northerners. Yet the abolitionists persevered, making use of the North’s expansive print culture to produce a profusion of antislavery newspapers, books, broadsides, and images. In terms of political impact, this relatively small band of idealists and intellectual reformers punched far above their weight. Southern enslavers launched a wave of repression and censorship aimed at the abolitionists, which in turn led to backlash by northerners increasingly troubled by the growing authoritarianism of southern enslavers.

After a somewhat unsatisfying slog through economic and cultural developments, American Republics regains its narrative momentum in describing the American settlement of Texas and the resulting war with Mexico. Once again at home in the complex swirl of race, violence, and colonialism, Taylor provides arresting biographical detail for figures such as Stephen F. Austin and Mexican strongman Antonio de Lopez Santa Anna. Taylor’s global mindset pays significant dividends, giving a compelling portrait of a fragmented and divided Mexico desperately attempting to forestall American aggression by inviting American settlement on Mexico’s terms. Mexico’s efforts to “Mexicanize” American settlers predictably failed. The largely Protestant American settlers rejected Catholicism and embraced slavery, which violated the terms of their land grants. When the Mexican government clamped down, American settlers revolted and ultimately won independence in 1836. The short-lived Republic of Texas teetered on insolvency and failure until American annexation in 1845. Slavery, Taylor persuasively argues, was a driving force in the U.S. acquisition of Texas. American enslavers such as John C. Calhoun not only coveted the prime cotton lands of Texas but feared that British takeover of the weak Texas Republic would spell the end of slavery’s expansion and perhaps the downfall of the institution.

The annexation of Texas ultimately provoked war with Mexico, which was in fact a key goal of President James K. Polk. A Tennessee enslaver and ardent expansionist, Polk was a Democrat in the Jacksonian tradition. Taylor’s damning portrait of Polk—whose political preoccupations almost cost the American military dearly in Mexico—is riveting. Polk’s naked imperial ambitions helped explain why the Mexican War generated significant opposition in the North. Anti-war Whigs joined with some northern Democrats in putting forward the Wilmot Proviso in 1846, which sought to prevent the spread of slavery in the vast territories acquired from Mexico. Political parties that once bridged sectional lines began to break down; the expansion of slavery increasingly pitted northerners against southerners. The heated and angry debate over the Wilmot Proviso anticipated the politics of the 1850s, in which slavery took center stage, ultimately leading to the Civil War.

Taylor largely understands the sectional tensions as a result of two types of settler colonialism, one focused on slavery and the other focused on free, white labor. He emphasizes the racism of the northern free-soil movement. Preventing enslavers from settling the West would also keep out blacks, which appealed to the racist sensibilities of many northerners. Yet for all the racism that predominated in the North, more northerners expressed a moral critique of slavery that would lead to widespread opposition to enforcing the Fugitive Slave Act of 1850. That moral critique of slavery would become increasingly important when northerners turned a war for Union into a war for emancipation, a transformation which Taylor’s otherwise brilliant book does little to help us understand.