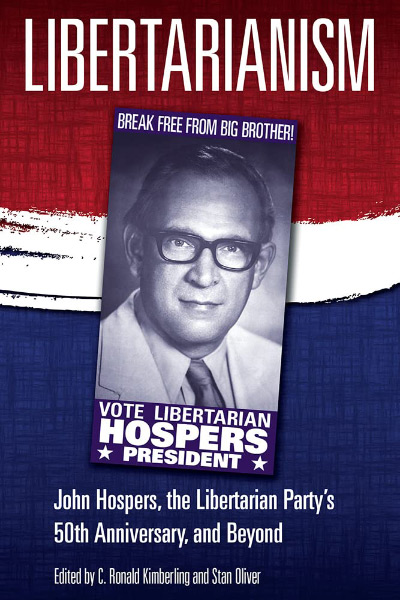 Libertarianism
John Hospers, The Libertarian Party’s 50th Anniversary, and Beyond
Edited by C. Ronald Kimberling and Stan Oliver
Hardcover
This book review is a web exclusive for the Summer 2022 issue of The Independent Review.

If one is interested in the history of libertarianism, there are two sorts of angles one might pursue. One might explore the academic history of libertarian theory—a study of key philosophical and economic works from the Enlightenment through today. But another approach would be to explore the history of the broader social movement, which to be sure has some overlap with academics, but which also includes magazines and pamphlets, clubs, student groups, think tanks, and of course the Libertarian Party, which recently reached its fiftieth year in existence. John Hospers would feature in either of these approaches, as he was (a) a professional academic philosopher, (b) a supporter of various clubs, magazines, and student groups, and (c) the Libertarian Party’s first nominee for President of the United States. Ronald Kimberling and Stan Oliver’s new book Libertarianism: John Hospers, The Libertarian Party’s 50th Anniversary, and Beyond is of the second sort, and uses Hospers as a focal point. The book, an edited volume featuring contributions from some two dozen authors, is a fun and fascinating history of the “movement” side of libertarianism, which compares favorably to Brian Doherty’s definitive and indispensable 2007 book Radicals for Capitalism: A Freewheeling History of the Modern American Libertarian Movement (N.Y.: Public Affairs).

What distinguishes Kimberling and Oliver’s book, in addition to the focus on Hospers, is the diversity of voices brought to bear on this history. Some of the essays are serious, scholarly accounts, while others are highly personal reminiscences by people who either knew Hospers, were involved with the Libertarian Party, or were involved in some other aspect of the broader movement (or all three). The book is divided into five main sections. The first section is “Appreciations of John Hospers,” which consists of very informal and sometimes very funny remembrances by people who knew Hospers. The second section is “Libertarianism in History,” which is primarily movement history as opposed to purely history-of-ideas. The next section recounts the history of the Libertarian Party by various authors, ranging from Party co-founder David Nolan to 2020 Libertarian National Committee Chair Nicholas Sarwark. The fourth section, “Libertarian Perspectives,” features policy-centric essays on such topics as immigration, health care, and education. The concluding section, “The Future of Libertarianism,” is, as it sounds, a set of essays on how both libertarianism (small-l) and the Libertarian Party might make progress going forward. This section features a 1977 article by Hospers himself.

Learning about the history of movement libertarianism and its political wing, the Libertarian Party, necessarily means learning something about Hospers; the volume’s editors are clearly correct about that. This entails seeing the ways Hospers interacts with the various associated “tribes and factions” that come in and out of libertarianism’s orbit. For example, we learn about the history of the Reason Foundation and Reason magazine. We learn about Ayn Rand and the Objectivist movement. We learn about the split between Rand and Nathaniel Branden. We learn about Murray Rothbard and the “anarcho-capitalist” critique of minimal-state libertarianism. And—this is surely what Kimberling and Oliver had in mind—we learn how Hospers intersected with all of these. Hospers had a lengthy association with Rand and was impressed with many of her arguments, though the friendship dissolved. Hospers knew Rothbard but disagreed with both Rothbard’s anarcho-capitalism and his denunciations of the United States. Hospers knew Robert Poole and Tibor Machan – and was helpful to the nascent Reason. Hospers knew Chris Sciabarra, William Bradford, and Stephen Cox, and was on the advisory board of the Journal of Ayn Rand Studies. It is fascinating to see all the interconnections in the broader movement, some amiable and others hostile, and all the more so when we see one figure pop up in different stories, almost as if there were a multi-node Venn diagram with Hospers in the nexus.

It's the curse of movements that they should be afflicted by schisms, and this book shows us a good deal of that. It also highlights how these divisions are often intertwined with personalities. Why did Rand fall out with Hospers? Why did Mises disapprove of Rothbard? Why do some libertarians embrace the Libertarian Party and others despise it? It’s impossible to study a movement without understanding the force of personalities and personal conflict. This is something that purely academic studies of libertarian ideas in philosophy and economics generally avoid. There is probably a good reason for that, but one’s picture of a movement is thereby lacking something, and books like this one, along with Doherty’s, are essential for filling in that gap.

Space does not permit discussion of all thirty-eight chapters, but I would like to briefly note a few highlights. The remembrances of Hospers by Jack Wheeler and Chris Sciabarra are both historically rich and deeply personal. Wheeler seems to have a photographic memory and recounts whole dialogues with Hospers. Tom Palmer relates Hospers’ influence to the dialectic between Thomas Paine and Edmund Burke. Kimberling’s account of libertarian youth movements of the 60s and Poole’s history of Reason are essential for understanding the evolution of the movement outside academia. Of course, the section on the Libertarian Party’s history is important as well. Some people may yet not know that in the 1972 presidential election, Hospers and his running-mate Tonie Nathan received one electoral vote, thanks to a “faithless elector” disappointed by Nixon’s interference in the economy. Ilya Somin has a fascinating discussion of immigration policy in Constitutional law. And of course, Hospers’ 1977 essay is a gem, though it’s depressing to think about why his ideas do not resonate with more people.

It's a perennial question whether it’s more likely to advance the prospects for liberty to have a third party specifically dedicated to libertarianism or to try to push one of the two major parties in a more libertarian direction. Hospers’ one electoral vote hasn’t been topped, but of course, both of the major parties remain hostile to libertarianism. It’s fascinating, therefore, that the book includes a Reason interview from 1975 with Ronald Reagan, just finishing up his time as Governor of California. It’s a lengthy interview, and Reagan seems to have a decent understanding of, and more sympathy than one might expect for, libertarian ideas. Yet his presidency did not substantially alter the fundamental dynamic of lobbyists and logrolling in the federal government, and many of the results of his administration are at odds with the views he espoused in the interview. In some dimensions, we are a more free society than fifty years ago; in others less. How much of this is due to the Libertarian Party is hard to say, though the influence of the various youth movements, clubs, magazines, and pamphlets is undeniable. One thing these do is help spread the ideas of philosophers and economists beyond the academic sphere. John Hospers was certainly a big part of both.