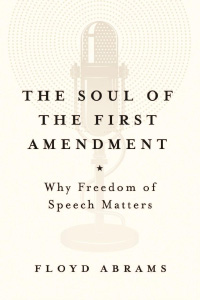 The Soul of the First Amendment
By Floyd Abrams
Kindle Hardcover Paperback Audiobook MP3 CD
This book review is a web exclusive for the Spring 2018 issue of The Independent Review.

Floyd Abrams, one of the key figures in the last half century of constitutional disputes over the First Amendment, has written an excellent enchiridion on the focus of his professional career. His credentials as a First Amendment practitioner are impeccable. Abrams successfully argued New York Times v. United States (1971) and Citizens United v. FEC (2010). The Soul of the First Amendment is an equivalent academic achievement to his courtroom success.

This second point puts Abrams at odds with many First Amendment commentators. A good deal of the literature on the First Amendment treats its promises of rights as a democratic statement. According to this view, the First Amendment was ratified with the intention of facilitating the democratic functioning of American government. Supreme Court Justice Stephen Breyer’s book Active Liberty: Interpreting Our Democratic Constitution is a famous example of this thesis, although Abrams could have cited the arguments for “public discourse” by Robert Post (e.g. “Participatory Democracy and Free Speech,” Virginia Law Review 97 [2011]: 477, 483) and Paul Horwitz (First Amendment Institutions. Cambridge: Harvard University Press, 2013, pp. 12-3) as well as no less a free speech luminary than Alexander Meiklejohn (Free Speech and Its Relation to Self-Government. New York: Harper, 1948). All of them, and many others, argue for the democratic meaning of the First Amendment. They are wrong.

To make his case, Abrams reviews the history of the First Amendment’s passage, noting in passing that there was no disagreement over the extent or nature of the rights that the Bill of Rights sought to defend (p. 10). The only disagreement was in the manner in which they were best defended. The arguments of the Federalists aside, Abrams argues that it is a good thing the First Amendment was passed. It has been a star player in more than a half century of restrictions on government power. And it is important to point out that the restrictions it imposes are only on government power. The first five words of the First Amendment, “Congress shall make no law,” has meant that the Supreme Court has applied the First Amendment to the government and not to private entities (p. 9). If the First Amendment had begun “all citizens are guaranteed the right to...” then the government may very well have been empowered to restrict censorship of a variety of non-governmental associations on the grounds that ensuring individual rights to speech and press from private institutions was the duty of the state. While Abrams does not make this point explicit, such a wording would have turned on its head the essential point of the First Amendment, a restriction on government power, and empowered government to meddle in the inner workings of private associations such as press outlets, which may refuse to publish their own journalists, as well as religious institutions, which may reject non-adherents to the faith.

A secondary point of Abrams’ book is that the First Amendment as it has been rendered in American constitutional law is unique on the world stage. This is not to say that other Western countries do not protect freedom of speech or freedom of the press (i.e. Norwegian protection of journalists’ confidential sources is “one that American journalists could only view with envy,” p. 57). But in matters of offensive speech, incitement, libel, privacy, and the like, the First Amendment provides significantly more speech protections than do other Western countries.

Abrams provides a fairly standard history of the development of free speech case law in the twentieth century and points out that the modern First Amendment is a break from European and especially British precedent. But, Abrams argues, this break did not take place until Bridges v. California (1941) when the Court made it explicit that the First Amendment was a rejection of British legal norms, giving Americans greater freedoms than those allowed to British citizens (p. 59). This difference, as Abrams demonstrates, has only been made more explicit in recent years. Many of the anti-Muslim statements of then-presidential candidate Donald Trump and his supporters would have been illegal hate speech in much of Europe.

Even more controversially, the First Amendment also protects the expenditure of money as speech. In Citizens United, Abrams successfully argued for protection of corporate expenditures on campaign speech. His exegesis of the case is superb, emphasizing the preeminent importance of the Court’s ruling and demonstrating how the protection for the free speech of purportedly powerful moneyed interests is the only position consistent with the anti-censorial spirit of the First Amendment. He writes, “Censorship is contagious. Permitting the government—the very entity the First Amendment was adopted to protect against—to limit the speech of some inevitably would risk the rights of all” (p. 27).

One of the most important philosophical points that Abrams makes is in the last chapter. He writes, “Having sweeping First Amendment rights does not begin to answer the question of how to use them” (p. 113). Abrams takes a position different from both the critics of the expansiveness of free speech and free press, who argue for clear restrictions on the basis of national security and the like, and defenders of the unassailable rights of the press, who believe there is no moral responsibility on the part of the press to show judgement in what it publishes. For Abrams, the press ought to be concerned with how the information it publishes will be used and take into consideration whether it will harm the interests of their nation. Where to draw the line between valuable information like Edward Snowden’s revelations of NSA’s domestic surveillance, which was undoubtedly a great service to the country, and Julian Assange’s reckless leaking of strategies and technology used to track terrorists, is, of course, the million dollar question (p. 129-33).

Abrams does not have a precise answer. In fact, his thesis precludes a precise answer. The First Amendment forbids government censorship. It does not give a reason why. But Abrams tells a story from his time litigating the Pentagon Papers case that provides some guidance on the question. After prevailing at the district court, federal judge Murray Gurfein spoke to Abrams and a colleague behind closed doors “as a private citizen.” Gurfein told Abrams that he had reviewed the papers and had determined that some would be dangerous to national security if they were published. Abrams writes, “[The judge] ‘wished’—that was the word he used—that the Times would give special consideration before publishing that material” (p. 137). The judge had just ruled that the New York Times was constitutionally permitted to run the material, but he asked—as a citizen—that the good of the nation be taken into account when making that decision. The Times did take the judge’s guidance into consideration as it determined what to publish, and withheld information on that basis. Abrams concludes, “I have always thought that was a good example of how the system ought to work” (p. 137). In other words, citizens ought to demonstrate prudence as well as courage in how they practice their First Amendment rights.

Despite making a superb case for the fundamental anticensorial meaning of the First Amendment, Abrams’ decision to focus on free speech and free press in some ways cuts against his argument that the First Amendment is fundamentally about restriction on state power. Recent scholarship has demonstrated that the expansion of free speech has in some cases enabled the government to intervene in internal group dynamics for ostensibly “good” or “democratic” reasons by ignoring the role of other rights such as association and assembly. The development of the doctrine of “expressive association” has been especially damaging in this regard (see John D. Inazu, Liberty’s Refuge: The Forgotten Freedom of Assembly. New Haven: Yale University Press, 2012, pp. 132-49). To attach the anticensorial soul of the First Amendment only to speech and press provides support for these sorts of counterproductive developments in constitutional law.

In other words, the First Amendment is an even more fundamental restriction on the scope of government action than Abrams’ case for the robust protection of speech and press implies. It provides a significant barrier between the political and the social. Abrams recognizes this barrier when he points out that the First Amendment is silent on whether the speech and press it protects is socially beneficial or damaging. In a similar manner, the First Amendment is silent on whether the religions and associations it protects are social benefits or social cancers, whether they support democratic government or undermine it. The fundamental restriction on the power of government means that the ultimate question of what to publish is left to the press, of what to say left to the speakers, of who to worship left to religious organizations, of who to assemble left to assemblies, of who to associate left to associations. This is the soul of the First Amendment, a fundamental restriction on the scope of government meddling in the social realm, which includes but is not limited to the “anticensorial soul” Abrams identifies.

Second, Abrams is emphatic that censorship was rampant until the First Amendment was incorporated against the states. However, his examples of censorship are largely derived from the First World War, when the country was in the throes of Woodrow Wilson’s nationalism and anti-German hysteria (this was the era of the “Four Minute Men” after all). Abrams’ own historical account of the Bill of Rights notes that there was nearly universal agreement on what the rights were, but sharp division on how they would be best protected (p. 10). It seems reasonable to suspect that there may have been a culture of free speech that prevailed in America even while it was obscured in the judicial record, a point broadly made by Michael Kent Curtis (Free Speech, “The People’s Darling Privilege”: Struggles for Freedom of Expression in American History. Durham: Duke University Press, 2000).

The third point of criticism is aesthetic. The book would benefit from subheadings and clearer references to important cases. This would make an excellent reading on the history and values of the First Amendment for an undergraduate class. However, the lack of visual organizational cues and occasional vague references to landmark cases would stall a non-First Amendment expert. Perhaps this concern that can be addressed in a second edition aimed at classroom use.