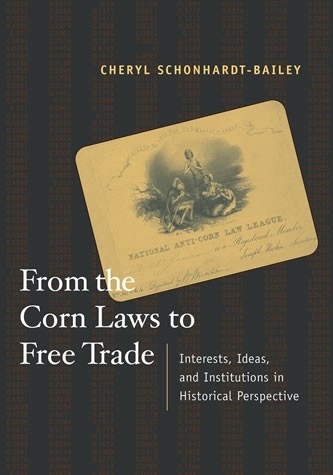 From the Corn Laws to Free Trade
Interests, Ideas, and Institutions in Historical Perspective
By Cheryl Schonhardt-Bailey
Kindle Hardcover Paperback
This book review appeared in the Summer 2008 issue of The Independent Review.

In From the Corn Laws to Free Trade, Cheryl Schonhardt-Bailey takes a fresh and rigorous look at the determinants of Corn Law repeal in mid-nineteenth-century Great Britain and tries to integrate the role of broader economic interests with the role of ideas and politics to find out why the British adopted free trade. She approaches Corn Law repeal by treating it as a puzzle.

Political representatives acted in a way that was contrary both to the mandate on which most of them had been elected and to their apparent self-interest. Indeed, the Peel government fell just one month after the repeal. Yet the move to freer trade persisted in spite of this political setback, and Great Britain became the freest trading nation in the world. To be sure, large-scale economic forces compelled a move to reform tariffs, especially in agriculture, but the fact that members of Parliament paid a personal price for supporting the repeal suggests that ideas and beliefs may have mattered as well. It may also be significant that in the period after Corn Law repeal, trade was neither as free nor as open as this book and the existing literature suggest (a point on which I expand later).

Schonhardt-Bailey’s solution to the puzzle is that changing economic interests “accounted for the momentum behind the repeal,” overturning all else (p. 2). Yet this impetus for both economic and democratic transformation—which might have led to revolution—was uniquely shaped by the institutions and ideas of nineteenth-century Great Britain.

The author deploys all the tools of analytic and quantitative political economy to deal with the repeal puzzle. In her core work, she focuses on the statistics of roll-call votes in Parliament from 1841 to 1847, attempting to understand how pivotal members came to change their positions on trade policy. Despite her focus on economic interests, her explanations are far from narrowly materialistic. Indeed, she maintains that the votes changed because Peel convinced supporters that repeal was necessary to preserve the power of the aristocracy. In her attempts to establish the latter claim, she is most original and most controversial.

Roughly the first half of the book is devoted to the “demand side” of repeal. Here, Schonhardt-Bailey’s story seems broadly to match standard interest-group arguments in the literature, though it is more narrowly tailored than usual. She claims that the geographic concentration of the textile industry facilitated the creation of the Anti–Corn Law League and its development into an effective lobbying group. At the same time, many large landowners had increasingly diversified their wealth holdings into more modern industries, such as mining and railways. Because they could benefit from a more open industrial economy, they were “vulnerable” to calls for liberalizing trade even if they were fundamentally sympathetic to traditionalist appeals to protect agriculture.

The bulk of the book’s second half is taken up with the politics of reform and is based on a quantitative textual analysis of various speeches in the House of Commons about trade policy from January 22, 1846, to May 15, 1846 (chapter 7), and during the parliamentary debates of 1814–15, 1826–28, and 1842–44 (chapter 8). The analysis also includes the neglected debate in the House of Lords (chapter 9). The author concludes from this analysis that owing to the efforts of the Anti–Corn Law League, “protectionist MPs were increasingly alarmed about the prospect of a middleclass and working-class alliance in pursuit of far more radical reform than repeal” (p. 226).

In this part, Schonhardt-Bailey is less than clear in her presentation. How are we to interpret the results of the textual analysis? There is no clear theoretical context for deciding which texts mattered, especially for the marginal votes. The general presumption seems to be that heavily repeated themes linked to other oft-voiced opinions are indicative of growing “concern.” Although this approach is intuitive and in some ways ingenious, I am not sure if it improves much on standard anecdotal evidence. The major improvement is her demonstration that the ideas on which one usually focuses in studying the issue were not in fact unrepresentative of the general debates. But weighing the relevance of those speeches when one draws inferences from what the members of Parliament said to explain how they voted is a bit more tenuous.

Schonhardt-Bailey seems to go further than even her textual analysis would suggest by claiming that fear of a French-style revolution was a real concern in Britain. Given that the French uprising came later than the repeal and that the British situation was far more politically stable than the French situation, I am not sure how far one can push this alleged fear of revolution. Nonetheless, her ideas are interesting and not implausible. Certainly, the idea that broader economic interests push politicians in a general direction, but institutional specifics, individual beliefs, and ideology determine the exact manner in which they act is congenial to the literature in modern economics, particularly in public-choice economics and the new institutional economics.

Yet the puzzle is not fully answered. Even if the author’s conjectures are correct, why did these beliefs lead to a change with such far-reaching consequences, and, more important, why was the repeal extended to fuller free trade and not reversed after the government’s downfall? My own view is that these outcomes were possible because large-scale economic forces were pushing Great Britain to open up trade and because the Corn Law repeal was not nearly as dramatic a move to free trade as historians have portrayed it to be (see John V. C. Nye, War, Wine, and Taxes: The Political Economy of Anglo-French Trade, 1689–1900 [Princeton, N.J.: Princeton University Press, 2007]).

The Corn Laws were a relatively recent addition to the list of British protectionist measures in the eighteenth century. Many of the most important tariffs on wine, sugar, coffee, tea, and rum—which predated the Corn Laws and lay at the core of the mercantile system that Adam Smith had derided in the eighteenth century— generally persisted for a few decades even after Corn Law repeal. Because this repeal did not usher in “pure” free trade, the political cost of “voting your beliefs” rather than your narrow interests was lower, and maintaining pressure for reform after the Corn Law repeal was probably easier. In contrast, the Anti–Corn Law League and the liberal reformers had incentives to talk up and exaggerate the effects of this change as much as possible. In the end, something like true free trade began to arise only after the 1860 Anglo-French Treaty of Commerce and probably was not realized fully till the 1880s. It is likely that a full-scale unilateral move to pure free trade in the 1840s would have met with much greater resistance and more serious fiscal problems for the state than the moderate changes actually implemented in the 1840s and 1850s. Thus, although Corn Law repeal was a harbinger of future reform, it was not the singlestroke transformation that most of the history books represent it as.

These caveats notwithstanding, Schonhardt-Bailey’s book is an excellent work. Thorough, scholarly, and thoughtful, it should be an important reference for students of commercial policy for a long time to come. Nevertheless, much room remains for further study of the broader historical determinants of trade reform even for this seemingly well-studied period of history.