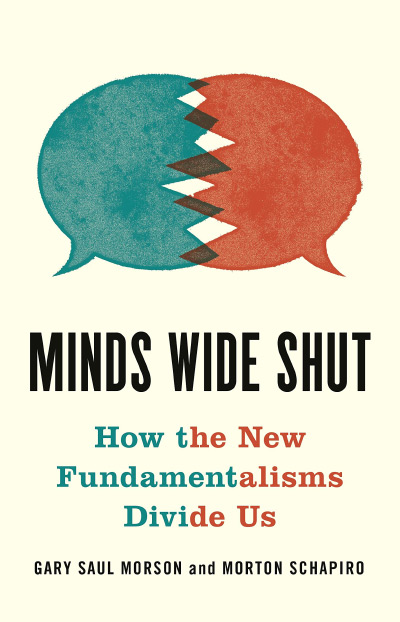 Minds Wide Shut
How the New Fundamentalisms Divide Us
By Gary Saul Morson and Morton Schapiro
Kindle Hardcover Paperback
This book review is a web exclusive for the Summer 2022 issue of The Independent Review.

1960s vintage comedian-songwriter Tom Lehrer introduced his song “National Brotherhood Week,” with the observation: “I’m sure we all agree that we ought to love one another, and I know there are people in the world who do not love their fellow human beings, and I hate people like that!” Nearly sixty years later a similar joke can be made about ongoing political and social divisions.

Both the left and right in the United States are caught in a vicious cycle. One side expresses a grievance, based on a resentment, accompanied by a proposal to ameliorate the grievance. The other side categorically rejects this, declaring the first side’s position is itself a cause for justifiable outrage. The first side heaps disdain on those who do not go along with their position. The other side does the same to those who do go along. Both sides are self-righteous. They express shock and outrage at the stubborn failure of their adversaries to see the light. Both sides often condemn those who do not express sufficient scorn for the miscreants on the other side. The cycle of malice escalates, making democratic discourse hateful and dysfunctional.

So how to break the vicious cycle? Simple. Good and reasonable people in the middle, like us, should express our outrage at the extremists. We have legitimate grievances and justifiable resentments against those grievance and resentment-mongering right-wing fascists and left-wing commies. Those at the extremes should be shamed and marginalized! And aren’t we heroic and exquisitely righteous in promoting this noble and enlightened viewpoint! Well no. Like hating people who do not love their fellow-man, it is doubtful such an approach is cogent or useful.

Those of us concerned about current political polarization find its solution to be a dilemma. Aside from joining in the hate fest, what are we to do? Minds Wide Shut: How the New Fundamentalisms Divide Us does as good a job as any recent writing on the topic in diagnosing the problem, and maybe that is the best we can hope for.

Gary Saul Morrison, Professor of Slavic Languages and Literature at Northwestern University and Morton Schapiro, President and Professor of Economics at the same institution can be described as two “unwoke” older white guys in prestigious positions in higher education. In their previous 2017 book Cents and Sensibility: What Economics Can Learn from Humanities the authors argued that economists can learn from literary scholars, and vice-versa, if both make a good faith effort to understand and appreciate the other’s methodology. Human behavior and human society are complex, and an educated understanding will be found in neither a purely scientific nor a purely descriptive approach.

In Minds Wide Shut the duo borrows many of the ideas and examples from their first book to plea for rediscovering the liberal bourgeoisie norms of traditional academic discussion. This offers a guide, however feeble, out of the current political and cultural polarization.

While the book is usefully divided into chapters, two themes are repeated throughout. First on what they call fundamentalism—as mentioned in the title; and second on the limits of scientific knowledge in understanding human behavior and informing ethical choices.

The fundamentalism theme begins in the preface where the authors note that in a polarized and tribalized world: “Anyone who disagrees is either willfully stupid or deliberately malicious” (pp. xv-xvi). In such a world, conversations about current affairs are not based on careful consideration of various viewpoints, but rather “righteous indignation abounds” (p. xvii).

In the same page they note that there is an opposite view just as problematic: an anti-market fundamentalism that argues “capitalism cannot be compassionate any more than the plague can be healthy.” There is little room for inquiry, nuance, or reasoned discussion when either type of fundamentalist knows beforehand the answer is either “privatization or nationalization” (p. 6).

A few pages on attention turns from economics to the humanities. Structuralist analysis, a one-time prevailing framework in the humanities attempted to explain everything. Among some it became a fundamentalism. But its opposite, deconstructionism which denies the possibility of knowledge, just as easily and quickly (“almost overnight”) became a negative fundamentalism. “One would have made Plato smile, the other even Hume blush” (p. 9).

To their credit the authors devote the entire second chapter to what they mean by fundamentalism. They begin with the original early-twentieth century development in American Protestantism that gave rise to the name. Conservative Protestants attempted to articulate the most basic, that is fundamental, Christian beliefs. The movement was neither monolithic nor well defined. However, after the Scopes trial in 1925 where religious conservative William Jennings Bryan’s claims of biblical inerrancy were mocked in the court of public opinion, the term fundamentalism “became and has remained a term primarily of abuse” (p. 15), part of the “vocabulary of insult” (p. 16).

The authors are keenly aware that the term has often been used as a slur against “those one does not like” (p. 18). To avoid this pitfall and to allow the term to be used outside the domain of religion, they carefully outline three characteristics typical of movements or groups they deem as fundamentalist.

The first characteristic of a fundamentalism is its assertion of certainty. As in their previous book the authors rely on philosopher Isaiah Berlin’s distinction between the intellectual hedgehog and the fox. The hedgehog has one big idea, whereas the fox relies on weaving truth from numerous sources. “Fundamentalists are hedgehogs” (p. 22). The authors judiciously make the case that various thinkers and movements (from Gary Becker to Marxism) fit in this category, as well as articulating in more detail the nature of negative fundamentalism.

The second characteristic of fundamentalism is its claim to the perspicuity of its truth. Not only is its truth certain, it is obvious to all who will see. In this view of the world, truth, or at least important truths, are self-evident, self-verifying. Finally, almost all fundamentalisms have a foundational text or revelation that is authoritative. For Protestant fundamentalists this is usually the inerrant Bible. For atheist fundamentalists perhaps Darwin. For Soviet fundamentalists it is Marx, Lenin, and Stalin.

This is a workable framework for the authors’ purposes as it allows for fundamentalism outside the traditional domain of religion. It also explains how science, often seen as the antidote to fundamentalism, can be a form of fundamentalism in its own right. They recognize “it is possible to accept science superstitiously. If one accepts it as unchallengeable and unchangeable dogma” They advise: “Wince when you hear people profess that they ‘believe in science’ as if it were one solid block of doctrines to be accepted uncritically” (pp. 90-91).

This segues to the second major theme of the book: the limits of scientific knowledge in understanding human behavior and informing moral choices. As in their previous book they ground the discussion on the ancient observation of Aristotle: “it is the mark of an educated person to look for precision in each class of things just so far as the nature of the subject admits” (p. 11). Mathematics and physics call for more precision than interpreting literature, assessing culture, or resolving ethical dilemmas. Yet numerous social scientists, “‘moral Newtonians’ as Elie Halevy famously called them, have offered systems purporting to be sciences” (p. 23). The same theme holds for practical ethical issues where one is well advised to “avoid the unpalatable choice between strict ‘moral geometry’ and the appeal to ‘personal preferences’” (p. 64—authors are quoting Jonsen and Toulmin; Albert R. Jonsen and Stephen Toulmin, The Abuse of Casuistry [1988, Berkley: University of California Press, p. 44]).

Unsurprisingly the book includes chapters on the authors’ expertise: Chapter 4, “Price and Prejudice: Economics and the Quest for Truth” and Chapter 6, “Literature: How to Ruin It and Why You Shouldn’t.” In addition, it gives the reader a well thought out chapter on religion in Chapter 5, “Searching for Eternal Truths: Religions and Its Discontents.”

Chapter 3 “Divided We Stand” highlights the problems and absurdities of the current political/social divide. The authors document a 2019 poll in which 82% of all Republicans agreed that the Democratic Party had been taken over by socialists, while 80% of Democrats agreed that the Republican Party had been taken over by racists (pp. 75-76). Yet another poll asked New Hampshire Democrats if they would prefer Trump being reelected to a giant meteor striking the earth and destroying all human life—62% chose the meteor (pp. 80-81)!

Perhaps this last example is a fitting end to this review: Trump or annihilation? Come on! I have to laugh to keep from crying. Morson and Schapiro give no new solutions. But there likely are none. They do give us a good read.