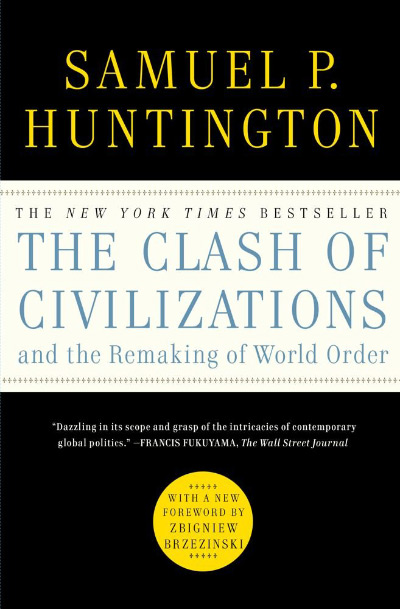 The Clash of Civilizations and the Remaking of World Order
By Samuel P. Huntington
Kindle Hardcover Paperback
This classic book review is a web exclusive for the Spring 2022 issue of The Independent Review.

The Clash of Civilizations and the Remaking of World Order is a highly influential book in international affairs and political science, seeking to explain and predict the emergent patterns of conflict after the fall of the Soviet Union. Although the book has many important insights, it is a catastrophe that revealed the illiberal political heuristics used internationally in foreign policy and reinforced them at a critical juncture in human history.

The Clash of Civilizations offers a civilizational paradigm for a post-Soviet world where conflict will be primarily fueled and defined by cultural civilizational differences. In the bipolar world of the Cold War era, governments were categorized by their loyalty to the Western or Soviet poles. After the fall of the Soviet Union, several civilizational poles rose under the leadership of core states, “rallying to those [cultures] with similar ancestry, religion, language, values, and institutions and [distancing] themselves from those with different ones” (p. 126). He defines civilization as the highest category of cultural identity, above which there is only a common humanity, and under which is the variety of other more particular identities like sects or sub-ethnicities. Huntington divides the world into eight major civilizations with mostly unambiguous borders: Sinic, Japanese, Hindu, Islamic, Orthodox, Western, Latin American, and African. Huntington presents evidence of a shifting balance in the international order that will slowly depose Western civilization’s hegemony. He concludes by evaluating the future of Western civilization compared to challenger civilizations, with a focus on relations with Sinic and Islamic civilizations. Finally, he provides prescriptions for the survival and success of Western civilization in this new age.

The strength of Huntington’s work lies in his contribution to a culturally cognizant study of international affairs. Huntington popularized a strong emphasis on cultural dimensions of conflict and strategy. Specifically, he attempted to produce a culturally cognizant realist analysis. Culture indeed matters for conflict! Two conditions must exist for violent conflict to occur: first, at least one party must perceive war as a potential net gain. Second, there must be impediments to transparent bargaining to engage in conflict. Diversity in cultures may entail issue indivisibilities and divergent assumptions about fairness that create barriers to transparent bargaining. As a result of his culturally cognizant analysis, he offers the prescription of humility for Western civilization as a matter of strategy. While realists have already studied spheres of influence, Huntington offers a civilizational specification to spheres of influence, necessitating that core states do not intervene in conflicts of civilizations different from their own, even if it is tempting to intervene.

The weaknesses of Huntington’s work are many. The influential book makes highly questionable assertions and predictions and uses a bellicose theoretical framework to interpret conflict among cultural groups. Dozens of critical appraisals of Huntington’s book have been published by scholars across scientific fields. To avoid redundancy, I will briefly review recent evidence in contradiction to Huntington’s thesis. I will offer an alternative framework to Huntington’s Hobbesian vision, the pluralistic vision, as a form of novel criticism.

Contrary to what Huntington predicts about the post-Soviet world, the most prolonged fault line conflicts are intra-civilizational. The Congo conflicts are intra-African. The Yemeni, Somali, and Afghan governance conflicts are intra-Islamic. The decades-old Karen conflict in Myanmar is ethnically intra-Sinic. Furthermore, in contradiction to Huntington’s predictions, governments have allied with groups of other civilizations against members of their own in the most pressing fault line wars. Consider the Nagorno-Karabakh conflict between Armenia and Azerbaijan. Iran stands not with Azerbaijan, its Muslim and Shi’a co-religionist government, but with Orthodox Armenia. Also, consider Georgia and Moldova, governments that supposedly belong to Orthodox civilization but have an explicitly Western orientation in foreign policy, with deep political ties to the United States and EU. On the Uyghur-Chinese conflict, where Muslim Uyghurs are faced with severe and brutal religious repression, many Muslim-majority Arab states choose not to condemn China, even while members of other civilizations do. These are not random exceptions. Instead, these are some of the most pressing conflicts in the twenty-first century that directly contradict Huntington’s predictions.

Another significant issue is Huntington’s flawed Hobbesian perspective on international affairs. The Clash of Civilizations is best understood as a political realist, Hobbesian, interpretation of the post-Soviet world. Unlike most political analysts who seemed to be hopeful for a more peaceful world after the end of the Cold War, Huntington calls for sobering caution. Realists, like Huntington, are united by four Hobbesian tacit presuppositions: First, states are the most consequential actors in international affairs. Second, international order is anarchic, and therefore, the probability of war between nations is ever-present. Third, all state agents within international order seek their narrow self-interest. Finally, the primary concern of state agents is the accumulation of power.

The Hobbesian perspective on international affairs is profoundly mistaken. The problem of the Hobbesian perspective is that it assumes that the international arena can be accurately modeled as a prisoner’s dilemma. So, mutual defection from cooperation is the single Pure Nash Equilibrium or self-interested rational strategy. In reality, the conflict between different civilizations is a perceptual dilemma, not a prisoner’s dilemma as the political realists portray it. A perceptual dilemma arises during conflict characterized by systematic bias about the outgroup’s preferences. Unlike the prisoner’s dilemma, both parties of a conflict prefer cooperation over defection in a perceptual dilemma while believing that the other party would exploit cooperation. So, defection is a regretful strategy resorted to out of fear that the other side does not prefer cooperation, even when the other side likewise prefers cooperation. Nuclear disarmament between the US and the USSR is a classic example of a perceptual dilemma (see, for instance, Scott Plous, “Modeling the Nuclear Arms Race as a Perceptual Dilemma,” Philosophy & Public Affairs 17 [Winter 1988]), but so is civilizational conflict.

In such cases, changing how we view each other can be incredibly consequential. And thus, language changes matter. By signaling other-regarding conciliatory intent, decision-makers can shift each other’s behavior to achieve the best outcome of mutual cooperation. Unfortunately, the Hobbesian framework that Huntington operationalizes makes escaping the perceptual dilemma and achieving mutual cooperation more difficult because it promotes negative perceptions of humans from other civilizations. Thus, the Hobbesian prediction becomes a self-fulfilling prophecy. Throughout the book, Huntington explicitly portrays different civilizations as having unapologetic ill-intent for one another, the exact opposite of what is required to escape the perceptual dilemma of militarism. For example, consider his biased framing of Western-Islamic relations:

In a market context, producers specialize in their comparative advantage. Speaking of cultural specialization, Peter Berger says: “[t]wo countries with a comparative advantage in two different products can trade their product to their mutual benefit. Perhaps cultural factors operate in the same manner” (Peter L. Berger and H. M. Hsaio, eds. In Search of an East Asian Development Model, New Brunswick, N.J.: Transaction Books, 1988, pp. 11). Just as societies are endowed with various natural resources, they also have unique cultural resources, which constitute their cultural comparative advantage, as Don Lavoie and Emily Chamlee-Wright termed it in Culture and Enterprise (London: Routledge, 2000, p. 64). Some societies have intensive kinship networks that enable them to build complex credit markets, while others have a strong work ethic. The cultural diversity probably extends to what Huntington calls civilizations and is a source of benefit since it can allow for specialization and higher productivity internationally.

Cultural experimentation is even more essential to appreciate civilizational diversity. A crucial Hayekian insight about the importance of liberty is that we need it to discover what is conducive to human flourishing in the long term. Indeed, we are limited in our ability to understand and predict what makes a society flourish. The best test of the usefulness of a rule is a pragmatic test. On the international scale, liberty means allowing different cultures to experiment with different socioeconomic arrangements. Despite having certainty that some social rules do not work, we cannot know the usefulness of social rules in other civilizations unless we allow them the liberty of being tested by time. Assuming minimal interventions in each other’s affairs to avoid distortions in the outcomes of rules, members of different civilizations can observe outcomes of different experiments and judge pragmatically. After all, we cannot rationally predict outcomes. According to the pluralistic vision, the international sphere is an environment for cultural learning and inspiration about which rules we should adopt and reject. The great diversity of human civilizations is an advantage, as it allows for the maximal extent of experiments and thus human progress.

Understood as an essentialist Hobbesian interpretation and prediction about the post-Soviet world, The Clash of Civilizations is exceptionally unoriginal. Yet, twenty-five years after its publication, the "civilizational clashes" phenomenon remains relevant. Tragically, it has become a social reality specifically because political decision-makers believe and act on it in some international conflicts. Many governments are therefore stuck in a perceptual dilemma. However, that does not need to be the case in the future because a liberal international order characterized by peaceable diversity is possible. Those who seek a genuinely liberal international order should uphold the pluralistic vision as an ideal and should convince political decision-makers across the globe to disabuse themselves of the “Clash of Civilizations” lie.