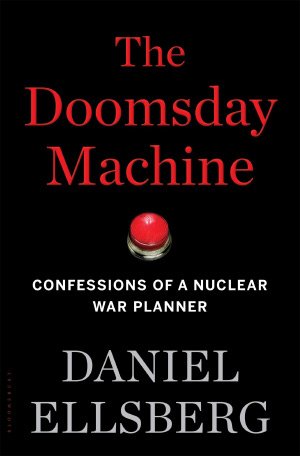 The Doomsday Machine
Confessions of a Nuclear War Planner
By Daniel Ellsberg
Kindle Hardcover Paperback Audiobook
This book review is a web exclusive for the Spring 2019 issue of The Independent Review.

In 1971, Daniel Ellsberg leaked a secret study by the Department of Defense on the realities of the U.S. government’s involvement in the Vietnam War. Among other things, what became known as the Pentagon Papers revealed that the Johnson Administration had purposefully and systematically misled Congress and the American public regarding the scale and scope of U.S. involvement in the war. The U.S. government responded by charging Ellsberg with conspiracy, espionage, and the theft of government property. These charges were eventually dropped when it was revealed that the Nixon administration engaged in criminal behavior to discredit and destroy Ellsberg.

A key issue in constitutional political economy is the “paradox of government”—a government powerful enough to protect citizens from threats is also powerful enough to abuse that power to predate citizens. The Doomsday Machine can be read as a variant of this paradox—a government imbued with the awesome powers of nuclear weapons in the name of protecting citizens can use those powers not to exploit citizens, but rather to destroy human civilization. Whether the centralized powers of government are used for good or bad is a function of the rules of the game, and much of The Doomsday Machine can be read as an exploration of the various rules—organizational structures, procedures, and strategies—associated with the U.S. government’s nuclear program. The story is a sobering one.

Consider, for example, the issue of command and control which deals with the procedures for launching a nuclear attack and the overall safety of the nuclear arsenal. Many believe that Presidential authority is required to launch a nuclear attack as dictated by formal rules. However, upon investigating the issue in the 1950s and 60s, Ellsberg found that a wide array of people at many different levels had their “finger on the button” and he identified numerous instances where a nuclear strike could have been launched without presidential authorization. For example, a U.S. overseas base might be attacked, and commanders would need to make an immediate decision as to whether to respond without waiting for formal authorization from the president. Human error is another major issue. For example, there is some risk that planes manned with nuclear bombs might crash on takeoff which would create chaos, both due to the immediate destruction caused by the explosion and because of how others react to the explosion without necessarily recognizing the accidental cause. In other cases, there might be communication failure between a military outpost and the president due to technological issues. And Ellsberg notes that false positives, whereby computer-generated warning systems indicated an imminent attack when no such attack existed, were a real possibility that risked causing a nuclear war.

Taken together, Ellsberg concludes that the idea that the U.S. President has unilateral access to the “nuclear football” is “theater—essentially a hoax” (p. 69). The reality is that the power to unleash widespread destruction is delegated to a range of actors—both military and civilian—at a variety of levels of authority. This delegation creates numerous potential points of failure which may result from either human error or from the nefarious actions of those who possess command over the use of nuclear weapons.

Ellsberg also disposes of the myth that the sole purpose of nuclear weapons is deterrence. For a nuclear arsenal to effectively deter attack, the threat of retaliation must be known and credible. Each side prepares to attack the other and to destroy the heart of its command and control system. In response, the other side delegates the authority to initiate a nuclear attack so that there is no central point of failure. But this delegation only works if this information is public so that the other side knows that there is no single point to attack and that an attack will be met with retaliation by those possessing delegated power to launch a counter-attack. In the United States, this delegation is kept secret and the myth of the president as the unilateral point of authorization has been perpetuated in order to minimize fear on the part of the citizenry, allies, and the world. The result of the secrecy—what Ellsberg calls the “Strangelove Paradox”—is that the nuclear arsenal fails as a means of deterrence.

Further undermining the deterrence myth, Ellsberg contends, is that U.S. presidents have repeatedly used their nuclear weapons as a tool to get other governments to bend to their will. He documents twenty-five instances, from Truman to Clinton, where U.S. Presidents have exercised the threat of “first use”—the use nuclear weapons without being first attacked by an adversary—to force the hand of other governments. In contrast to the widely-held belief that the U.S. government has not used nuclear weapons since Nagasaki, Ellsberg argues that the U.S. government has proactively used its nuclear arsenal in the same way “that a gun is used when you point it at someone’s head ... whether or not the trigger is pulled” (p. 319). The commitment to an option for first use by numerous U.S. presidents stands in direct contrast to the idea that nuclear weapons are used purely for deterrence.

The costs of nuclear war are truly staggering. Ellsberg notes that the Kennedy administration estimated that the deaths associated by a nuclear strike against the Soviet Union and China would range from 275 to 325 million in those countries and another 100 million in Eastern European satellite countries (p. 136-7). These figures were likely underestimated, Ellsberg notes, due to the possibility of a “nuclear winter”—a long-term drop in temperature due to smoke and dust which blocks the sun—which would have long-term consequences on agriculture, resulting in widespread famine.

Why does this matter today? Ellsberg notes that although nuclear stockpiles have been reduced by 80 percent from their all-time high in the 1960s, existing arsenals are still capable of widespread destruction through immediate death and through the creation of a nuclear winter that would have long-lasting effects on human welfare. These Doomsday Machines, which could be triggered by a variety of factors including human error or a single terrorist attack “would kill billions of humans, perhaps ending complex life on earth” (p. 339). Ellsberg offers a range of options for limiting the damage that can be done by Doomsday Machines. These range from the U.S. government adopting a no-first-use policy, to eliminating American intercontinental ballistic missiles (ICBMs), to dismantling the entire Doomsday Machine. The difficulty, of course, is that there is little incentive for anyone in power in the U.S. government to adopt these measures, as they would be giving up the awesome discretionary powers associated with controlling the Doomsday Machine. The status quo, therefore, is likely to persist.

Two questions arise from Ellsberg’s book that deserve further consideration. First, why haven’t we experienced a nuclear catastrophe over the past seven decades? Ellsberg seems surprised that a major nuclear disaster has not occurred and warns that there is the real risk of such a calamity in the future. But the absence of such a catastrophe to date means that we must at least consider the possibility that the risk is not as large as one might think. In his book Atomic Obsession (New York: Oxford University Press, 2010), for example, John Mueller argues that policymakers have overemphasized the risks from nuclear weapons which has led to wrong-headed policies aimed at reducing that risk. The Doomsday Machine offers the opportunity to consider the true magnitude of the risks associated with nuclear weapons.

A second, and related, question is: what is to be done about efforts by governments and non-state actors attempting to acquire nuclear weapons? The Bush doctrine of pre-emptive war was grounded in the idea of preventing nuclear proliferation. The U.S.-led foreign interventions associated with this policy, however, have themselves been disasters that have imposed significant costs, both in terms of money and human welfare, on ordinary people. The Doomsday Machine is indeed a danger, but an even worse situation may be a government that maintains this machinery while also adopting a proactive foreign policy in the name of preventing others from potentially accessing a similar apparatus. This scenario characterizes the United States government today, and it is this combination of militarism and the Doomsday Machine that poses perhaps the greatest risk to human civilization and wellbeing.