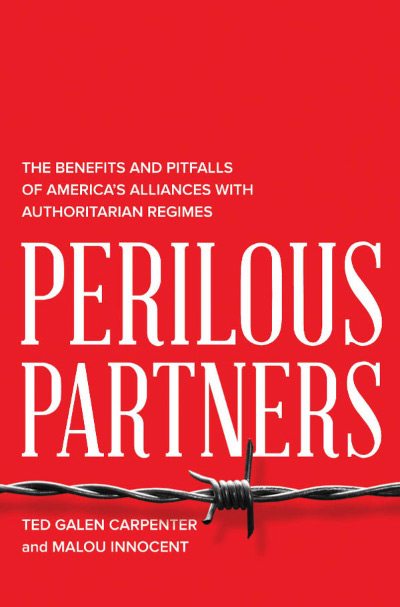 Perilous Partners
The Benefits and Pitfalls of America's Alliances with Authoritarian Regimes
By Ted Galen Carpenter and Malou Innocent
Kindle Hardcover
This book review appeared in the Spring 2016 issue of The Independent Review.

Over the past several years, the U.S. government has extended its counterterrorism efforts into Africa and partnered with several governments in the region. These partnerships typically involve the host government granting permission for the United States to carry out military and drone operations in the region. In return, the U.S. government has provided a variety of aid—money, weapons, equipment—to its host governments while also looking the other way regarding human rights abuses. Such arrangements create a fundamental tension between two tenets of U.S. foreign policy—U.S. national security on the one hand and the advancement of global human rights on the other. More often than not, members of the U.S. government choose to enter into arrangements with unsavory despots to advance the former goal while directly undermining the second. A senior official succinctly captured the existing approach, noting that “[t]he countries that cooperate with us get at least a free pass [regarding human rights abuses]. . . . Whereas other countries that don’t cooperate, we ream them as best we can” (quoted in Craig Whitlock, “Niger Rapidly Emerging as a Key U.S. Partner,” Washington Post, April 14). This fundamental tension is at the heart of Ted Galen Carpenter and Malou Innocent’s important book Perilous Partners.

Carpenter and Innocent point out that this tension existed well before the current war on terror and can be traced back several decades to the early days of the Cold War. And, of course, relationships with authoritarian despots existed before the Cold War—for example, with the Soviet Union during World War II—but such Cold War partnerships became a normalized part of U.S. foreign policy. As part of its Cold War strategy, the U.S. government established a network of client states, controlled by some of the worst governments in the world, to attempt to counter the Soviet Union’s influence. This normalization resulted in what the authors refer to as the “ethical rot” of U.S. foreign policy because the partnerships undertaken in the name of promoting liberty, democratic governance, and free markets legitimized and strengthened regimes that actively undermined these very values and institutions.

Following an introductory chapter, the book is broken into two parts totaling sixteen chapters. The first part focuses on the relationships between the U.S. government and its questionable Cold War allies, and the second part is focused on partnerships formed after September 11, 2001. These chapters, which make up a large majority of the book, are reason enough to read it. Unless the reader is completely closed-minded, the content of these chapters should make even the staunchest advocate of intervention question the value of such partnerships. I cannot hope to do justice to this content, but the core theme is that members of the U.S. government have been active participants—both directly and indirectly—in empowering and entrenching some of the worst governments in the world while knowingly undermining the very values they purport to hold dear. The associated costs have fallen largely on those living under these regimes, who are often among the most vulnerable to begin with.

The second issue deals with the assumption that these unscrupulous partnerships actually advance security. The fact, however, is that in numerous instances the partners of the U.S. government were willing and knowing participants in perpetuating violence and insecurity. For example, Carpenter and Innocent discuss the difficulties of the U.S.–Pakistan partnership following 9/11 (chapter 14), which included the Pakistani government undertaking actions that promoted violence and undermined the U.S. government’s stated goals in the region. At best, the benefits of these perilous partnerships are murky and unpredictable, while the costs are positive and often significant—innocent people are and will continue to be harmed by the U.S. government’s support of regimes that are known to be committing a variety of human rights abuses.

The concluding chapter offers an approach for dealing with the fundamental tension that motivates the book. Carpenter and Innocent’s strategy is one based on “ethical pragmatism,” which suggests that the U.S. government should maintain an “arm’s length relationship” with questionable partners and only under certain situations. Specifically, the U.S. government is justified in forming partnerships “when national survival or another vital interest is truly in jeopardy” (p. 500). However, when the issue is one of secondary interests—or interests “that are pertinent but not indispensable to the preservation of America’s physical integrity, independence, domestic liberty, and economic health”—then only “modest exertions” are justified (p. 501). The bar for forming questionable partnerships must be still higher in cases of “peripheral interests,” the “loss of which would be more of an annoyance than a significant blow” (p. 502).

Ultimately, this proposed solution is unsatisfying. For one thing, the categories of various interests are broad and unclear, making it difficult to ascertain what is to be included in and or excluded from each. Also missing is a discussion of the incentives and constraints facing the key decision makers in the U.S. government. The authors implicitly model the U.S. government as a centralized and homogeneous “brain” that balances the costs and benefits of partnerships to maximize the national security of U.S. citizens. In reality, however, the political decision-making process is made up of a host of different interests that often yield policies that not only fail to further national security but also actively contribute to undermining it.

As Carpenter and Innocent note, “most of the close relationships that Washington developed with such allies and clients during the Cold War involved little more than the protection and promotion of peripheral interests” (p. 502). One might make a similar argument about the relationships in the post-9/11 period. This raises a crucial issue. If the members of the U.S. government have historically squandered precious lives and resources (both American and non-American) in the pursuit of insignificant peripheral interests, why should we expect them to suddenly start following a strategy of ethical pragmatism? Absent some major shift in incentives, it is likely that members of the government will continue to overstate perceived threats against supposed vital U.S. interests while perpetuating existing relationships and forming new relationships with authoritarian despots.

In the closing lines, Carpenter and Innocent write that the effectiveness of their proposed strategy is “dependent on the subjective judgement of policy-makers, with all of their human frailties” (p. 504). My reading of the insightful history of U.S. partnerships provided in Perilous Partners is that U.S. policy makers’ judgment is often terrible and that their human frailties are great. This combination is deadly when it comes to matters of foreign affairs and the empowerment of governments that brutalize innocent people. It is also crucial to realize that the domestic costs of these partnerships are not just the “ethical rot” of American values but also the real loss of liberties at home due to expansions in the scope of domestic-government power associated with a proactive foreign policy (see Christopher J. Coyne and Abigail R. Hall, “Perfecting Tyranny: Foreign Intervention as Experimentation in Social Control,” The Independent Review 19, no. 2 [Fall 2014]: 165–89).

As I read Perilous Partners, I was continually reminded of the saying “Show me your friends, and I shall tell you who you are.” This book is extremely important precisely because it shows the reader who the friends of the U.S. government are. In doing so, it also sheds light on the nature and character of those who constitute that government. Upon reflection, it becomes clear that what is needed is not a new framework to guide policy makers but rather a fundamental rethinking of the scope and scale of power that the U.S.political elite currently wield in foreign affairs.