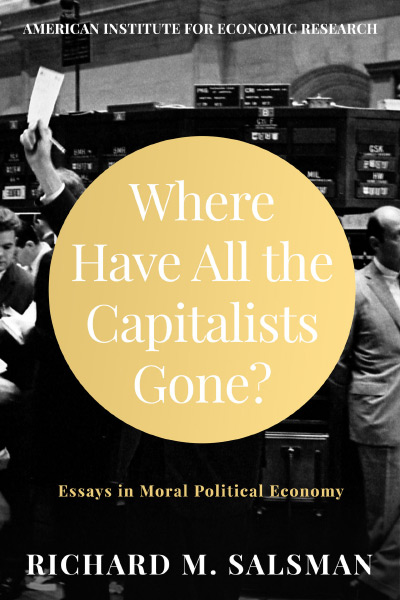 Where Have All the Capitalists Gone?
Essays in Moral Political Economy
By Richard M. Salsman
Kindle Paperback
This book review is a web exclusive for the Spring 2022 issue of The Independent Review.

In his most recent book Richard M. Salsman asks “Where have all the capitalists gone?” By capitalists, he means “advocates for capitalism.” Likewise, by socialists, he is referring to “advocates for socialism.” He details how true supporters of capitalism defend both its causes and its effects and how those who condemn capitalism are preoccupied with inequality. The author convincingly illustrates and argues that capitalism is the only legitimate habitat for humanity because it is sustainable, practical, moral, egoistic, rational, and natural (i.e., consonant with human nature).

Salsman is an assistant professor in Duke University’s Philosophy, Politics, and Economics (PPE) program, an American Institute of Economic Research (AIER) Senior Fellow, and a Senior Scholar at the Atlas Society. He is the author of three previous books and hundreds of articles and essays on various aspects of capitalism.

Salsman is concerned with the spread of a deep philosophical hostility toward capitalism that has occurred during the first two decades of this century. This can be seen in a revival of anti-capitalist ideologies: populism, nationalism, socialism, and fascism. Three massive government failures over the last three decades have contributed to the promotion and application of anti-capitalist policies: (1) the terrorist attacks of 9/11, (2) the 2008–09 financial crisis and resulting recession, and (3) the pessimistic forecast of the spread of the COVID virus. He maintains that this is due to the failure of intellectuals to defend capitalism’s morality that is based on rational egoism. To counter this trend, the author calls for serious capitalist intellectuals to unite and fight for capitalism—the one system that is moral and practical in this world.

Salsman illustrates how anti-capitalist or quasi-capitalist ideologies are based on the flawed principle of altruism that states that service to others is the only justification of a person’s existence. Self-sacrifice to others is thus seen as an individual’s highest moral duty. Altruism (literally “otherism”) sees business profitability, proficiency, and success as being in opposition to the moral tradition of duty.

This book is a collection of sixty-six short essays that have appeared over the past decade in a variety of publication outlets such as Forbes.com, the American Institute for Economic Research (AIER), Capitalist Magazine, and The Objective Standard. The essays, based on timeless principles, are thematically organized into ten logically structured and integrated sections. Each chapter covers a single, delimited theme and presents a self-contained treatment of the topic at hand that is consistent with the ideas presented in the rest of the book. The author’s inductive approach to writing illustrates cause and effect, and integrates theory and practice. His main intellectual influences are Ayn Rand in philosophy, Alexander Hamilton in politics, and Jean-Baptiste Say in economics.

The ten sections include: Meaning and Morals; Freedom and Governance; The Primacy of Production; Money and Banking; The Business Cycle; The Fiscal State and Its Burden; Justice and Inequality; Globalization and Its Foes, Crisis, Real and Exaggerated; and Varieties of Anti-Capitalism. The chapters illustrate the effects of the entire range of government policies: regulatory, antitrust, trade and protectionist, monetary, fiscal, taxation, environmental, public education, international, military, and so on.

In addition, important ideas are clearly presented in forty tables and charts. For example, one such table, Ethical-Legal-Political Elements of Capitalism versus Statism, clearly depicts the essential differences between these two systems. In addition to those exhibits, there is an Epilogue encouraging people to “Follow the Science” and an Appendix in the form of a table listing capitalism’s seven most well-known “Fans and Foes”—Marxism, Keynesianism, Conservatism, Libertarianism, Objectivism, Environmentalism, and Feminism—and their answers to each of four key questions: What is capitalism? Is it practical? Is it moral? Is it sustainable (long-term)?

Salsman’s essays integrate the disciplines of philosophy, politics, and economics. These three fields of study encompass the core concepts and essential principles that shape society. These areas are closely and inextricably linked because of their focus on human reason and on the organization of human interaction.

The transdisciplinary approach taken by Salsman in his book (and in Duke’s PPE program) runs counter to and challenges deeply entrenched tendencies toward separation, specialization, professionalization, and autonomous development of the human disciplines of political science, economics, philosophy, law, sociology, and history. The kind of approach that crosses a number of disciplines is critical in today’s multi-faceted world—a world that is dominated by the fragmentation of knowledge. There are common roots and natural affinities among philosophy, politics, and economics. These disciplines provide the intellectual foundation for exploring social problems and for policy analysis and development. By taking this approach, people can understand that capitalism is a rational doctrine based on a clear understanding of man and society in which morality, economics, and politics (all parts of one inseparable truth) are found to be in harmony with one another.

Salsman pays tribute to Adam Smith who defended the “system of natural liberty” and fathered the study of political economy, which J.B. Say improved upon. In Wealth of Nations Adam Smith conveyed a detailed understanding of why a free economy works best and in Theory of Moral Sentiments he examines the process by which individuals adopt moral standards through which they judge actions by others and by themselves.

Say’s Law of Markets states that production is the source or cause of consumption. A person’s level of production determines his ability to demand. Wealth is created by production and not by consumption. Production is both necessary and primary for man’s existence. Salsman heralds Say’s Law as a landmark achievement of integration in economic science and as a key reality-based component of classical political economy.

In his rational philosophy John Locke alone first explained and defended the essentials of capitalism: human reason, individual rights, private property, and market prices. He provided the philosophical basis for the makers of the Constitution who distrusted government while recognizing its necessity for a social order. Alexander Hamilton and the American Federalists demonstrated how a constitutional rights-respecting government was possible and necessary. They explained how a constitutional government is distinguished by specific restraints that try to ensure that power is not abused. Their goal was to have fixed written rules that limit the exercise of political power. The rule of law, a meta-legal principle, requires law to be general and abstract, known, and certain—and equally applicable to all people.

Capitalism, the system of the mind, is the only system that is central and necessary for the possibility of attaining human flourishing. Capitalism is a system consistent with man’s nature and defensible in terms of human flourishing. Like Ayn Rand, Salsman views capitalism as a social system based on the recognition of individual rights (including property rights) in which all property is privately owned and in which the only function of government is to protect man’s rights. The government may legitimately use force only in retaliation and only against those who initiate its use. In order to provide the maximum self-direction for each person, the state should be limited to maintaining justice (i.e., courts acting on objectively defined laws), police, and military defense, and to protecting life, liberty, and property.

The author explains that capitalism is the best social system because it relies upon the morality of rational egoism (as opposed to self-sacrificial altruism), the ideology of individualism (as opposed to collectivism), and upon the politics of constitutionalism. In such a system, reason is a person’s means of survival and flourishing. Because reason is competent to know reality, it is necessary to begin with what exists in the world. Thinking should be preceded by inductive observation in one’s efforts to understand the world.

Salsman explains that markets are not made by consumers, but rather by producers whose profit-motive is natural and rational. Market exchange is a process of social cooperation that employs division of labor, specialization, and prices as signals and transmitters of knowledge. Prices are useful in carrying out the rationing function and are fast, efficient, conveyors of information. The profit-and-loss system in a voluntaristic system is just and moral. Not only does profit provide risk-takers with incentives, also provides a reward for effectively serving others, and serves as a measure of efficiency in the use of resources to satisfy customers. Markets are based on interdependent operations and cooperation among businesses, employers, employees, manufacturers, distributors, banks, unions, and so on.

I highly recommend Where Have All the Capitalists Gone? In it, Richard Salsman provides a clear and accessible introduction to some of the best moral and economic arguments for capitalism. The only weakness is an unevenness in the style of writing that is common in a compilation of essays from a variety of publications. Using an inductive approach, this work offers the student of political economy and the educated layperson an easily understood and systematic treatment of the philosophical, political, and economic ideas that underpin the reality of capitalism and the institutions that impact commercial enterprises.