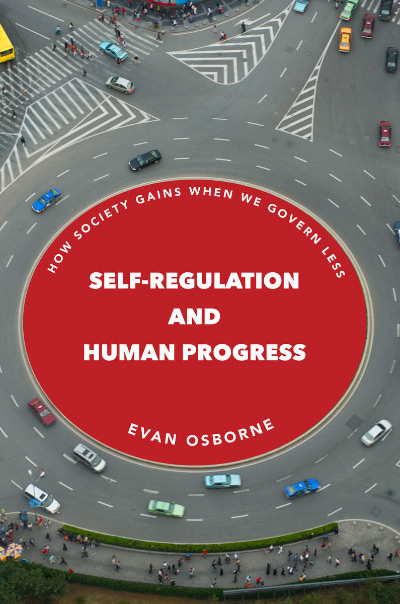 Self-Regulation and Human Progress
How Society Gains When We Govern Less
Evan Osborne
Kindle Hardcover
This book review is a web exclusive for the Fall 2019 issue of The Independent Review.

Discussions of regulation often focus on rules imposed by government agencies. When an area of life is not regulated in this way, people often describe it as unregulated. However, in Self-Regulation and Human Progress, economist Evan Osborne emphasizes that “All human interactions are regulated in some way” (p. 3). Often, these interactions are not regulated by external authorities, but by feedback and incentives within a social system that enable the system to self-regulate.

While economists are generally familiar with some self-regulating features of markets, Osborne’s scope is broader. He focuses on three key self-regulating systems: science, free expression, and what he calls “the socioeconomy.” Osborne emphasizes the socioeconomy rather than merely the economy in order to show how the “logic of self-regulation extends far beyond buying and selling of goods,” encompassing diverse social phenomena such as art and ethics (p. 103). While covering these diverse arenas of human action, Osborne incorporates them into a coherent narrative. He takes a historical perspective, exploring how scholars developed arguments for self-regulation in all of these arenas, and how their arguments built on one another.

To make this argument, Osborne covers human history from the dawn of our species. He begins by discussing social cooperation among our closest biological relatives: chimpanzees and bonobos. While their social groups were small, they illustrate the evolutionary roots of tendencies for both cooperation and violence. Humans differ from chimpanzees and bonobos in that our intelligence allows us to form complex social groups. Osborne discusses the role of both self-regulation and political regulation within these groups, starting very early in human history. Drawing on work from anthropologists, he discusses self-regulating mechanisms within bands, tribes, and chiefdoms. While each of these organizational forms have authority figures, they did not yet have full-blown states that could impose political regulations. States were born with the advent of sedentary agriculture. In an account reminiscent of James C. Scott’s recent work (Against the Grain: A Deep History of the Earliest States, New Haven, CT: Yale University Press, 2017), Osborne describes how these new hierarchical states regulated production and distribution of agricultural surplus. Many older systems of self-regulation were displaced with the rise of the state, and much of the rest of the book chronicles how thinkers in the West rediscovered the value of self-regulation in various spheres of social life.

According to Osborne, modern thinkers rediscovered the power of self-regulation largely by studying and practicing the scientific process. Scientists, like all humans, are fallible. But science has a variety of social mechanisms that help correct errors. Scientists conduct experiments to test their claims, and they encourage others to repeat these experiments. Often they attempt to falsify their hypotheses. Peer review provides a mechanism for vetting results and subjecting arguments and findings to scrutiny by other people with relevant specialized knowledge. Osborne describes the history of these and other social practices that help science regulate itself. Moreover, he shows that the self-regulating standards of the scientific community evolved over time. There is not a single fixed method that has always and everywhere been recognized as the scientific method. Instead, a variety of imperfect methods compete, subject always to criticism by other scientists. In this regard, the very methods by which science self-regulates are themselves subject to a self-regulating process of competition over what constitutes science.

Similar bottom up self-regulating processes operate in the world of communication more broadly, at least when individuals have free expression. But of course, for much of human history free expression was the exception rather than the rule. In Chapter 4, Osborne explains how that changed. This is partially a history of technological progress and political struggle. Osborne explains how political and religious elites attempted to squash the expression that Gutenberg’s printing press enabled. He also covers later political and legal battles that helped protect free speech throughout Europe and the United States. However, this chapter is just as much a history of ideas as it is a history of political struggle. Osborne explains how various thinkers advanced the argument that free expression enables self-regulation, allowing us to learn from contention as truth collides with error. He offers an accessible introduction to classic defenses of free speech such as John Milton’s Areopagitica, Baruch Spinoza’s Theological-Political Treatise, and John Stuart Mill’s On Liberty.

Chapter 5 shows how arguments for self-regulation were applied to the socioeconomy more broadly. He begins with arguments regarding political economy. Rather than starting from Adam Smith, he begins earlier, with the Spanish scholastics associated with the School of Salamanca. Smith does not take a back seat, however, and Osborne deftly weaves together The Wealth of Nations and the Theory of Moral Sentiments, showing how both were important for the burgeoning theory of self-regulation. Beyond economic self-regulation, Osborne explains how self-regulation can also lead to moral progress. Some of this stems from markets, which create incentives for peaceful, respectful cooperation with potential trading partners. In this regard, commerce can turn potential enemies into friends, harnessing self-interest to make us treat one another better. But Osborne also explains how some scholars built on existing theories of evolution and self-regulation to explain how morals and social norms evolve. In particular, he focuses on the sociologists Herbert Spencer and William Graham Sumner. Today, both are often condemned as “social Darwinists” who would prefer to see the poor die off in order to weed out unfit individuals. Osborne soundly refutes this characterization of Herbert Spencer. In Sumner’s case, he acknowledges that the truth is complicated, and extensively quotes from Sumner’s work in order to show the nuances of his thought. However, he convincingly shows that both Spencer and Sumner supported voluntary charity to help the poor, and that both strongly opposed imperialism, colonialism, and special privileges for business interests. Their ideas have been wrongly maligned, and Osborne’s work is a useful corrective to influential smears against these social scientists and peace advocates.

Osborne documents the rise of self-regulation, but he also discusses various forms of backlash. Some of these involve the belief that self-regulating systems work wonders, but they sometimes go awry and require political fine-tuning. This is the view of market failure theorists, who believe that externalities, asymmetric information, monopoly, and other deviations from perfect competition justify political intervention. Osborne discusses the history of these arguments, as well as some practical objections regarding political incentives and knowledge limitations. He also discusses more fundamental challenges to self-regulation. Some of these were political ideologies like Marxism and nationalism. But he also focuses a great deal of attention on behavioral economics, because its challenge to the notion of rational individuals is often seen as challenging the foundations of self-regulating markets. Osborne documents the rise of these critiques using Google ngrams, which measure how often words and phrases appear in published books.

The breadth of topics Osborne covers is in one sense a great strength. It helps the reader understand the diversity of self-regulating phenomena. Moreover, it makes the book compelling to a wide range of readers. Osborne offers us valuable lessons about science, civil liberties, the history of economic thought, sociology, law, and so much more. The book is accessible to lay readers but can teach academics from almost any discipline something relevant to their work.

While the book’s breadth is a major source of strength, it also creates a weakness. Osborne has covered so much ground, and incorporated knowledge from so many academic disciplines, that it all becomes hard to verify. Self-regulating science works well largely because scientists with specialized knowledge check each other’s work through processes like peer review and replication. But this is easier to do with narrow and specialized research questions than with broad and multidisciplinary works. A book as broad as this one is likely to miss details, simply due to the sheer diversity of the subjects it engages. While reading the book, I only noticed one error, and it was minor. In an otherwise excellent discussion of the use of the Espionage Act to suppress anti-war speech during World War I, Osborne says that the Espionage Act was “since-repealed” (p. 79). While many of the Espionage Act’s most controversial and censorious sections were repealed, the Espionage Act is still on the books. Indeed, the U.S. government continues to prosecute whistleblowers under the Espionage Act. Osborne’s error is minor, as the sections most relevant to the cases he discusses were repealed. However, minor errors like this are hard to avoid when discussing so many subjects in a single book.

The book’s core message is clear and correct. Many social processes, including commerce, science, and communication, have self-regulating tendencies. These help fallible human beings correct our errors, discover new ways to improve our lives, and progress towards a more peaceful, knowledgeable, and prosperous world. Our future depends on defending these processes from those who would crush them through state control.