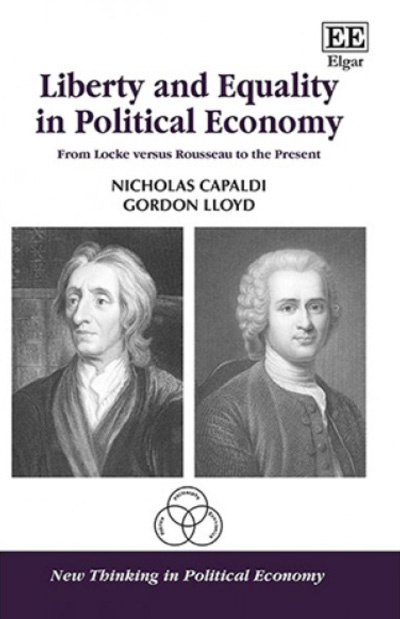 Liberty and Equality in Political Economy
From Locke versus Rousseau to the Present
By Nicholas Capaldi and Gordon Lloyd
Hardcover
This book review is a web exclusive for the Fall 2017 issue of The Independent Review.

While the appropriate focus of political economic inquiry has been debated for centuries, interest in the primary objectives and goals of society has intensified in the aftermath of the Great Recession. Much of the discussion hinges on the relative importance of individual liberties in comparison to economic equality. Liberty and Equality in Political Economy provides a historical account of the development of these competing ideals, offering critical insight for scholars and policymakers considering these issues today.

Nicholas Capaldi and Gordon Lloyd aim to provide context to the debate between liberty and equality by examining the evolution of the two narratives throughout modern history. By framing the evolving conversation of Jean Jacques Rousseau’s equality as a response to John Locke’s liberty, the text offers insight into both the development of the current institutions that shape modern society and the historical context for the current debate regarding inequality. The authors guide readers through the important contributions of modern thinkers to the two narratives and identify themes related to the original works of Locke and Rousseau. The result is a work that will ultimately assist scholars, policymakers, and students in understanding the historical underpinnings of perhaps the most important debate of our time, regardless of their personal views on the relative importance of liberty and equality.

Capaldi and Lloyd build a foundation for the narratives around the works of Locke and Rousseau. While both thinkers recognized the significant changes that were occurring as society moved from agrarianism to a new economic system, they arrived at fundamentally different conclusions regarding the aim of society. Locke viewed the technological project, or the development of the world to benefit the human condition, as the primary goal of society. In his view this requires a market-based economy, restrained government, formal rule of law, and individual freedom. The authors characterize Rousseau’s ideas as a response to Locke that views the technological project as inherently corrupt and unresponsive to the true needs of society. Rousseau instead argues on behalf of the general will as the focus of economic inquiry. The general will is challenging to define but can perhaps be understood to imply that excessive inequality should not be tolerated.

The authors chronicle the contributions of other modern thinkers and movements as a continuous conversation in the context of the narratives of liberty and equality. Adam Smith’s work is analyzed as both a response to Rousseau and a strengthening of the Lockean view. The role of Lockean liberty is highlighted alongside Smith’s contributions in the founding of America while Rousseau’s equality is chronicled in the French Revolution. The development of the liberty narrative throughout the nineteenth century is examined as an extension of Locke while the advent of scientific socialism is discussed as both a response to the liberty narrative and a correction of Rousseau’s equality narrative.

Capaldi and Lloyd bring the evolutionary account into the twentieth century, exploring the ebbs and flows of the narratives beginning with the Progressive Era in the U.S. After considering the views of significant contributors to the conversation throughout the 1900’s, the authors conclude by examining the contributions of Friedrich Hayek and Michael Oakeshott to the philosophical foundation of the liberty narrative and exploring Thomas Piketty’s recent work on inequality as the culmination of the Rousseau narrative.

The running themes of the liberty and equality narratives associated with Locke and Rousseau provide readers with a new framework to consider subsequent thinkers. Rather than report strictly on the works of key characters of modern economic history, the authors relate each contributor and movement back to the originators of the liberty and equality narratives, detail the advancement of both accounts, and highlight the impact of authors on future thinkers. This approach assists readers in understanding the evolution of the concepts over time and reinforces that fact that there are no simple or clear answers to the debate. These points are highlighted near the end of the book in chapter 12, where Capaldi and Lloyd conclude that the work of Hayek and Oakeshott implies that the historical development of the modern state suggests that “we can expect an indefinite lifespan for the tension between the Liberty Narrative and the Equality Narrative” (p. 193).

The conversational approach that Capaldi and Lloyd utilize throughout the text is perhaps the most refreshing element of their work. A perfect example of the value of this approach is evident in chapter 10, where Capaldi and Lloyd examine the work of John Maynard Keynes and Hayek in the context of the historical narratives of liberty and equality. While considering Hayek’s contributions to the liberty narrative and the challenges associated with social planning, Capaldi and Lloyd highlight Hayek’s contribution to the understanding of market prices simultaneously as a correction to earlier thinkers like Adam Smith and part of the rationale for Hayek’s rejection of the economic planning element of the equality narrative. The authors ultimately state that the “The Rousseau narrative would not be abandoned but it would undergo a reformulation in response” (p. 158), providing a link between Hayek’s work, the original authors of the narratives, and subsequent scholars.

Capaldi and Lloyd utilize the breadth of their knowledge to provide readers with a better understanding of why key authors either embraced or criticized the narratives of liberty and equality by offering details about the time in which the authors engaged in their scholarly pursuits and details about the authors’ individual experiences. This insight is perhaps most evident in the first two chapters that examine Locke and Rousseau. Capaldi and Lloyd note that Locke’s training as a physician and his personal theological beliefs inform his views on the appropriate goals of society. Additionally, the authors describe Rousseau’s original ascension as the result of winning an essay contest intended to promote the contributions of science and technology to society by contending that technological and scientific advancement failed to improve the condition of humans.

Capaldi and Lloyd are also careful to allow the writings of these well-known thinkers to illuminate the contributions to the narratives based on the merits of their work. However, Capaldi and Lloyd ultimately lean to the side of the liberty narrative and communicate this leaning in their analysis throughout the text. Ultimately, the authors view the inequality narrative as somewhat ambiguous overall and dislike the lack of commitment to personal autonomy, which is highlighted in their analysis of Piketty’s contributions to the equality narrative. An excellent example of Capaldi and Lloyd’s preference for the liberty narrative is highlighted in their analysis of Oakeshott’s contributions, stating “there is no sense in providing an argument for why one ultimately chooses what one chooses as long as it does not conflict with one’s own autonomy. This is an enormously practical mode of thinking” (p. 193).

There is little room to find fault with Liberty and Equality in Political Economy given aim of the book. Readers expecting a thorough history of economic thought or an overview of the key ideas developed by prominent economists over time may want to look elsewhere, but Capaldi and Lloyd explicitly aim to avoid a standard account of economic history in favor of developing the narratives of liberty and equality over time. Given this goal, readers may best appreciate this book if they already possess a general knowledge of the history of political economy. A number of quality books already offer a substantive overview of the history of economic thought and recent books like Lawrence H. White’s The Clash of Economic Ideas (New York: Cambridge University Press, 2012) provide an excellent overview of recent economic history. This book ultimately rewards readers by offering a unique perspective regarding how and why the liberty and equality narratives developed over time.

Liberty and Equality in Political Economy delivers on the authors’ goal to provide insight into the narratives of liberty and equality by examining the evolution of the conversation surrounding the views. Given the critical importance of the debate surrounding liberty and policy today, this book is highly recommended to anyone interested in improving their own understanding of the goals by which a society should be organized. As Capaldi and Gordon state in their conclusion “The conversation goes on between the Liberty Narrative and the Equality Narrative” (p. 216).