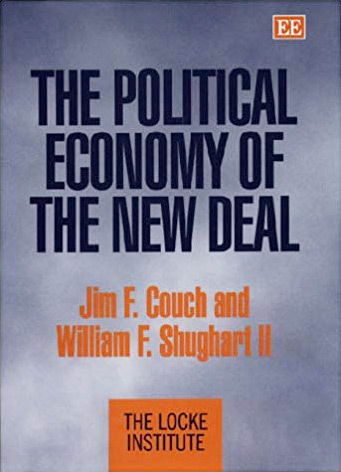 The Political Economy of the New Deal
Jim F. Couch and William F. Shughart II
Hardcover
This book review appeared in the Winter 1999/00 issue of The Independent Review.

The Great Depression remains one of the landmark events—many have called it the “defining moment”—of the twentieth century. By almost all measures it brought about a transformation of the role of the federal government in the American economy, as Franklin D. Roosevelt’s New Deal set out to bring “relief, recovery, and reform” to the beleaguered populace. President Roosevelt and his New Dealers achieved almost mythic status as selfless saviors of the economy.

In recent decades, cracks have appeared in this seemingly impregnable façade. Mistaken and inappropriate monetary policy now appears to have been a major factor in both the Great Contraction and the slow recovery. Moreover, New Deal programs probably retarded rather than promoted recovery from the depression. The unintended and undesirable long-run consequences of such programs as Social Security, AFDC, and agricultural price-support and output-restriction programs were visited on the postwar American economy. The harmful effects of the artificial separation of financial activities and government controls on deposit-interest rates were felt in the United States in the 1970s, and finally led to the removal of those controls.

In addition to increasing doubts about the beneficial effects of New Deal programs, questions have begun to be raised about the selfless motivation of those in charge of the programs. Some politicians in the late 1930s charged that political considerations had played an important role in the Roosevelt administration’s decisions about how to allocate funds among the states. However, the issue was largely forgotten until Leonard Arrington discovered documents prepared for Roosevelt’s 1940 reelection campaign. Those documents recorded New Deal expenditures by state. Arrington examined agricultural expenditures across the states, using the new information (“Western Agriculture and the New Deal,” Agricultural History 44 [October 1970]: 337–53). Arrington’s student, Don Reading, used the data to examine whether the state-by-state allocations were consistent with Roosevelt’s contention that the New Deal sought simply to bring about “relief, recovery, and reform” (“New Deal Activity and the States, 1933 to 1939,” Journal of Economic History 33 [December 1973]: 792–810). Reading concluded that relief and recovery of pre-depression income levels were much more important considerations than economic reform. Gavin Wright adopted a public-choice perspective and found that political considerations appeared to play an important role in allocating New Deal dollars (“The Political Economy of New Deal Spending: An Econometric Analysis,” Review of Economics and Statistics 56 [February 1974]: 30–38). He concluded that about 80 percent of the state-by-state variation in New Deal expenditures per capita could be statistically accounted for by political variables, as Roosevelt attempted to secure reelection. John Joseph Wallis argued that the political considerations may have been overstated because reform attempts were partially thwarted by some conservative state governments, particularly in the South (“Employment, Politics, and Economic Recovery during the Great Depression,” Review of Economics and Statistics 49 [August 1987]: 516–20). Gary Anderson and Robert Tollison argued that Congress exerted important influence over the allocation of New Deal dollars because Democratic representatives and senators wanted to enhance their own reelection prospects as well as aid Roosevelt’s reelection chances (“Congressional Influence and Patterns of New Deal Spending, 1933–1939,” Journal of Law and Economics 34 [April 1991]: 161–75).

Nearly all of these studies aggregate across spending categories and over the years from 1933 to 1939. In The Political Economy of the New Deal, Jim Couch and William Shughart argue that important information and insights are lost by such aggregation. Using more recent data, they disaggregate categories of New Deal spending and examine its determinants over time. In the first five chapters of the book, the authors introduce the topic and briefly review the history of the Great Depression, the Roosevelt administration’s agricultural policies, and the first and second New Deal programs. Chapters 6, 7, and 8 constitute the heart of the book. In chapter 6, Couch and Shughart examine “whether the money was allocated to those states and regions that had been hardest hit by the Great Depression and where economic need was consequently the greatest” (p. 124). In chapter 7, they critically review previous studies of the effects of politics on the pattern of New Deal spending. In chapter 8, “The Political Economy of the New Deal,” they examine the political and economic determinants of New Deal spending. Chapter 9 is a brief summary and conclusion of their analyses.

Couch and Shughart find that both economic and political influences were important in determining the allocation of total spending per capita, loans per capita, and grants per capita across the states. Presidential politics were much more important than congressional politics in determining the allocation of New Deal spending. The authors conclude that “The weight of this evidence thus points to a political explanation for New Deal spending patterns: other things being the same, more federal aid was allocated to states which had supported FDR most solidly in 1932 and which were crucial to the president’s 1936 Electoral College strategy” (p. 190).

The disaggregated analysis of individual programs strengthens this conclusion. Agricultural spending tended to be directed toward “states where less of the land was under cultivation and where the average farm was more valuable” (p. 194). The findings suggest that political determinants were the most important motivation behind the allocation of New Deal spending on agricultural programs. The Civil Works Administration existed only during the winter of 1933–34 and was aimed at providing immediate relief from the depression. The analysis of the allocation of CWA funds across states shows that “need” was an important determinant of the allocation of these funds, but by no means was political motivation absent. Seniority of its representatives in the Senate and House as well as presidential electoral votes increased “a state’s ability to attract CWA projects” (p. 198). An analysis of the determinants of Federal Emergency Relief Administration (FERA) spending leads to similar conclusions. Though economic need was clearly a determinant of FERA allocations, how well a state had supported FDR in the 1932 election was also “a positive and significant determinant” (p. 200).

Wallis argued that the matching requirements sometimes led to perverse economic allocations of New Deal funds, contrary to what the administration might have intended. To examine this question, Couch and Shughart examine the empirical relationship between WPA expenditures and sponsor contributions. They conclude that political variablesseniority in the Senate and support in the Senate for the billswere the most important determinants of WPA allocations. Support in the House was not statistically important, a result they explain by the overwhelming support for the bills in the House. The regression coefficient of the share of WPA expenditures from state sources was consistently and significantly negative, indicating that states that made smaller sponsoring contributions received larger WPA allocations, the reverse of the matching contention.

Overall, Couch and Shughart conclude that political considerations were an important and often a dominant determinant of the allocation of New Deal funds among states. By no means were the New Dealers selfless and disinterested bureaucrats, allocating dollars only on the basis of individual need.

Another paper by Wallis, which appeared after Couch and Shughart’s book, raises some additional complications (“The Political Economy of New Deal Spending Revisited, Again: With and without Nevada,” Explorations in Economic History 35 [April 1998]: 140–70). Wallis also reviews much of the literature and tries to recreate most of the results, though he does not disaggregate the spending categories. He argues that some of the political-productivity results of the models are driven by the inclusion of Nevada and one of its senators, Key Pittman, president pro tempore of the Senate throughout the New Deal. Excluding Nevada from the data set reduces the statistical significance of the political determinants and increases the statistical significance of the economic determinants. Wallis argues that a considerable portion, though not all, of the extraordinarily large spending in Nevada resulted from Nevada’s unique location rather than being politically determined.

Wallis also argues that “the strong, positive association of per capita spending and per capita electoral votes, and therefore some of the political variables, could be a matter of construction rather than substance” (159), because both per capita spending and per capita electoral votes declined with the size of a state’s population. Wallis’s alternative specifications, to correct for this relationship, show a much stronger influence of economic variables on the allocation of funds and a reduced influence of political variables, though “politics are still important” (163). Most of Couch and Shughart’s empirical models do include electoral votes per capita as an independent variable and are subject to this criticism. However, two of their three models of the determinants of CWA spending do not include this variable and still show similar results, pointing to a strong political influence on allocations. In addition, their analysis is the only one that disaggregates by types of spending and controls for spending variations over time.

From Arrington’s article through Couch and Shughart’s book and Wallis’s most recent contribution, the analyses have dealt with the allocation of New Deal spending, not the total amount of such spending. It is obvious that the total amount did not bring about recovery during the 1930s, but the total amount might well have been determined primarily by economic motivations. Even if so, however, it should not be surprising that the allocation of the funds among the states was subject to political as well as economic considerations, notwithstanding the inability of analysts to generate precise quantitative measures of the economic and political forces that determined the allocation.

These analyses also give further pause to simple macroeconomic analyses. Macroeconomics is concerned with only the total amount of such spending, not where it is spent, because of the implicit assumption that through the multiplier effect all parts of the economy will benefit. The analyses surveyed make it clear that government spending always occurs in particular places and on particular projects and that the local and regional effects are more importantpossibly much more importantthan the overall aggregate effects.

All in all, The Political Economy of the New Deal is a well-written book that makes us think further about the motives of the New Dealers and politicians in general. It is essential reading for anyone interested in the New Deal and the politics of the 1930s.

W. Gene Smiley
Marquette University
American HistoryEconomic History and DevelopmentEconomyLabor and EmploymentLaw and LibertyPhilosophy and ReligionSocialism, Communism, and Collectivism
Subscribe Buy This Issue Get the App