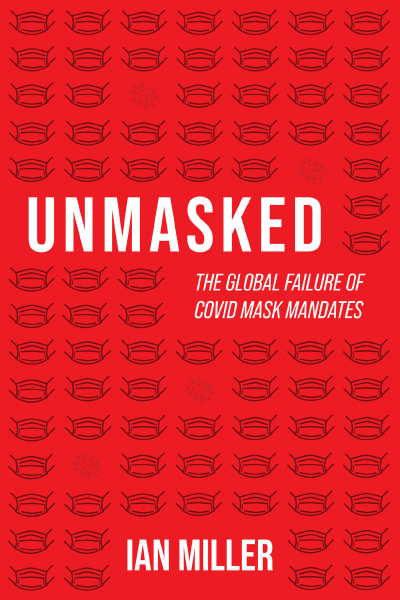 Unmasked
The Global Failure of COVID Mask Mandates
By Ian Miller
Kindle Paperback
This book review is a web exclusive for the Spring 2022 issue of The Independent Review.

Ian Miller argues that mask mandates do not work. They haven’t stopped the spread of COVID, so they don’t save lives. This may be true, but a neutral reader won’t be convinced by his evidence.

Miller begins by reminding us of a startling, if often forgotten, point: in the early weeks of the COVID pandemic, health authorities around the world told the public that masks were unnecessary. The Centers for Disease Control (CDC), for example, recommended voluntary home quarantine for people with sick family members, but didn’t mention masking. The ubiquitous Anthony Fauci on Sixty Minutes (March 8, 2020), explained that “right now in the United States people should not be walking around with a mask.” In an email cited by Miller, Fauci explained that the “typical mask you buy in the drug store is not really effective in keeping out” the virus. “I do not recommend that you wear a mask” (p. 11). Then weeks later, despite early research suggesting no transmission from asymptomatic patients, these health authorities in the U.S. and around the world reversed themselves when politicians and the public demanded that something more be done.

Soon, scientists began touting masks despite a lack of new evidence showing their benefits and authorities began mask mandates, following the lead of China. “Mask etiquette” became an international concern, with German President Angela Merkel scolding Bulgarian prime minister Boyko Borisov for wearing his mask below the nose in one famous (infamous?) photo. The CDC collaborated with Warner Media to digitally add masks to characters in famous movies to promote acceptance. Extreme claims about the effectiveness of masks began to circulate. Miller quotes Gavin Yamey of Duke University claiming that masks used properly could “reduce transmission somewhere between 50 and 85%” (p. 26). Most people responded by wearing masks when they went out in public, with usage rates around 80 percent from the summer of 2020 until the introduction of vaccines.

Although a randomized controlled trial in Denmark showed no statistically significant benefit from wearing surgical masks, the CDC soon trumpeted two studies asserting the effectiveness of mask mandates using much more aggregated data from two states. Miller effectively criticizes these studies for being overly simplistic and cherry-picking their findings.

After laying this groundwork, Miller examines the numbers himself. His key points are that despite widespread mask usage COVID rates soared to new highs and that the trends in COVID case rates weren’t all that different in places where governments mandated mask usage and those where they did not. However, although he denounces the CDC’s studies as overly simplistic, the same might be said of his analysis. The bulk of the book consists of graphs plotting COVID trends. These include country, state and local trends annotated to show the timing of mandates or their removal against increases and decreases in cases (or sometimes deaths)—and side-by-side trends comparing localities, states, and countries with different policies. He argues that the trends are very similar in most places, regardless of their policies. But another reading is that the trends were largely driven by mutations in the virus—which caused big spikes in cases almost everywhere followed by large declines, as generally happens with contagious diseases.

Miller is much more compelling when he quotes journalists and politicians making stupid statements and claims about masks and social distancing requirements that fell flat on their faces. The Washington Post, for example,published a headline meanly saying, “Welcome to Iowa, a State That Doesn’t Care if You Live or Die,” after it lifted its mask mandate in February 2021. Immediately afterward, as Miller shows (p. 153), Iowa’s COVID death rate plummeted. Its cumulative death rate is currently thirtieth in the U.S. Unfortunately, hyperbole sells in today’s media, which rarely prints retractions of flawed articles. The Los Angeles Times ran a headline avowing that “The Outdoor Dining Ban Worked,” in early 2021, but there was “no explanation contained in the article for how neighboring states saw cases decrease during the same time frame despite their refusal to ban outdoor dining” (p. 72). He scores points by noting that California’s excess deaths were far higher than Florida’s in the fall of 2020 and winter of 2021, despite California banning almost all gatherings while Florida dropped mask requirements, offered in-person schooling, opened theme parks, and hosted major sporting events. These are remarkable and important facts.

Unfortunately, for all his graphs, Miller is unwilling to look at the marginal impact of mask wearing and mask mandates. To make meaningful comparisons, it is necessary to hold everything else constant and root out the marginal effect of policies and actions. The simple comparisons Miller makes cannot accomplish this. Scholars have begun to estimate these marginal effects, but Miller doesn’t expend much effort in exploring their findings. In the closing pages he finally discusses one study from this vast literature, but it is a preprint study clearly marked as having not been peer reviewed, which “should not be used to guide clinical practice” (Damian D. Guerra and Daniel J. Guerra. 2011. “Mask Mandate and Use Efficacy for COVID-19 Containment in U.S. States.” MedRXiv, August 7, emphasis in the original).

I don’t claim to be well versed in this literature (although I have reported my daily symptoms and actions as part of a clinical study for over a year and a half). However, some of the studies I have seen have found sizeable reductions in COVID cases, ceteris paribus, associated with mask mandates—while others have not. For example, Alexander Karaivanov and co-authors (“Face Masks, Public Policies and Slowing the Spread of COVID-19: Evidence from Canada.” 2021. Journal of Health Economics) “estimate the impact of indoor face mask mandates and other non-pharmaceutical interventions. . .on COVID-19 case growth in Canada.” Mask mandate introduction was staggered from mid-June to mid-August 2020 in the 34 public health regions in Ontario. Using this variation, they find that “mask mandates are associated with a 22 percent weekly reduction in new COVID-19 cases, relative to the trend in absence of mandate.” That’s a sizeable effect. Wei Lyu and George Wehby (“Community Use of Face Masks and COVID-19: Evidence from a Natural Experiment of State Mandates in the U.S.” 2020. Health Affairs, 39 (8)) examine “changes in the daily county-level COVID-19 growth rates between March 31 and May 22, 2020.” They find that “mandating face mask use in public is associated with a decline in the daily COVID-19 growth rate by 0.9, 1.1, 1.4, 1.7, and 2.0 percentage points in 1–5, 6–10, 11–15, 16–20, and 21 or more days after state face mask orders were signed, respectively.” These effects are much smaller—but not zero, as Miller’s argument suggests. Authors of these studies are affiliated with the well-regarded National Bureau of Economic Research, so they cannot be dismissed out of hand—although it is entirely possible that there are flaws in the studies or that the reported results were reversed in later periods as COVID continued to spread. To be valid, studies must hold all relevant factors constant—such as differences in age, immunity, and susceptibility among different populations, as well as differences in the reliability of the data from state to state and country to country.

Miller’s fundamental point is that “As the ‘most important public health tool,’ it stands to reason that the overwhelming majority of comparisons showing similar locations with and without mask mandates should demonstrate easily identifiable benefits” (p. 82). This is a fair point, but he hasn’t done enough to identify the marginal effects. Eyeballing the data doesn’t cut it in the twenty-first century. At this point we realize that a dose of econometrics is necessary to answer such questions and identify marginal effects. The bar has been raised. Today “easily identifiable” means using more advanced statistics. Side-by-side comparisons—such as between North and South Dakota, one of which adopted a mask mandate, one of which didn’t—often show very similar trends (p. 96). This supports Miller’s case that masks weren’t a game changer and didn’t have the massive effects that some hyped. However, these side-by-side comparisons cannot get at smaller marginal benefits of a few percentage points—and we need to accurately measure these benefits before accepting or rejecting such policies.

Mask mandates make life more difficult in many ways. I have always hated how they diminish normal human interactions, which involve sending and observing facial expressions. And they infringe on liberty, which is a massive cost. Early one morning last May, as I walked toward the entrance of a local grocery store, I spotted a new sign near the door and hoped that it was the good news I’d been waiting for. A woman several yards ahead of me was close enough to read the sign and sang out “Free at last! Free at last!” I shared her sentiment at learning that the mandate had been lifted. But we cannot rig the case in favor of liberty by failing to use the best methods possible in measuring the benefits of policies that reduce these liberties.

Finally, Miller mentions one fact that deserves additional consideration. Anthony Fauci has headed the National Institute of Allergy and Infectious Diseases (NIAID) since 1984—almost 38 years. A real strength of democracy is that it generally requires those in power to step down after a few years. This helps constrain the abuse of power. Fauci’s 38 years is not quite the 48 years that J. Edgar Hoover headed the FBI, but it’s extraordinarily long and there is reason to worry about such a long tenure in office.

Throughout the book, Miller systematically unmasked public health officials for making factually incorrect claims and predictions. Such missteps have reduced the public’s trust in these bureaucrats and government more generally. Will this experience lessen the love affair with Leviathan?