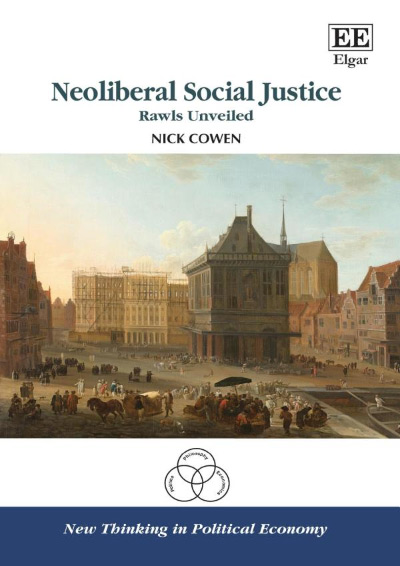 Neoliberal Social Justice
Rawls Unveiled
By Nick Cowen
Hardcover
This book review is a web exclusive for the Winter 2021/22 issue of The Independent Review.

Anyone reading up on political philosophy during this century would, minimally, become aware of three facts. One, that John Rawls’ theory of distributive justice remains enormously popular despite disagreement about how to implement it; two, that the expression “social justice” very often refers to a concern about wealth inequality (though it sometimes still refers to concerns about racial equality); and three, that the word “neoliberal” is used both as a term of abuse and as a positive marker of reality-informed liberalism. Therefore, the old adage about not judging a book by its cover is on-point for Nick Cowen’s new book, the title of which involves all three. Happily, Cowen avoids obfuscation and lays out clearly what he intends to argue. He interprets Rawls’ defense of the principle “justice as fairness” as chiefly concerned with responsible autonomy and civic equality, while being at least potentially open to empirical discussion about which mechanisms and institutions realize these ideals. He interprets “social justice” as involving but not limited to wealth inequality, with a more holistic civic equality being the bottom line. And he uses “neoliberalism” not as an undefined criticism of market society, but as a society driven by liberal democracy and open markets. The book is clearly argued and well-sourced.

Cowen announces right up front what his central question is: “What are the policy implications of Rawls’ theory of justice as fairness if we introduce realistic assumptions about human behaviour and social theory?” (p. 3). Part of what Cowen means by “realistic assumptions” is the insight that political institutions do not always work the way we’re taught to expect; for instance that parties chasing votes may well neglect principles of justice, or that when a benefit is concentrated but the costs are dispersed, a minority can profit at the expense of the majority. But if we proceed with full awareness of these sorts of issues, Cowen thinks that “the case for liberal democracy and capitalism follows from appropriately extrapolating Rawls’ principles with an updated account of political economy that reflects recent historical experience” (p. 3).

Let’s briefly review what these Rawlsian principles are. Rawls argues in his 1971 book A Theory of Justice that justice requires equal basic liberties for all citizens, where “liberties” are understood in terms of civil liberties, but that economic liberty can be restricted in service to the other requirements of justice. Economic inequality is permissible under a Rawlsian framework only as long as the inequalities attach to positions open in principle to all, and the inequality must be structured in such a way as to work to the greatest benefit to the worst off. Since real civic equality can be eroded by extreme wealth inequality, redistributive policies are necessary for justice. Sometimes this is taken to imply not only redistributive taxation, but direct state provision of public goods and state ownership of substantial capital assets.

It’s a live question whether the distinction between civil liberties and economic liberty is a real one at all. This has featured in criticisms of Rawls from as early as Robert Nozick in his 1974 Anarchy, State, and Utopia to John Tomasi is his 2012 book Free Market Fairness. And it is an important aspect of Cowen’s argument here. Cowen notes that economic actors left free to make decisions coordinate in ways that could not be planned in advance by an omniscient ruler. The aggregation of dispersed knowledge and the role of entrepreneurship in bringing opportunities to light are features of what Cowen refers to as a catallactic understanding of economic activity. Cowen shows how, ironically perhaps, it is more conducive to Rawlsian conceptions of free and equal citizens to allow a greater sphere for market processes.

Cowen adopts the “Robust Political Economy” framework previously developed by Mark Pennington, explaining that an “RPE approach contends that institutions aiming at human welfare should be capable of functioning in the presence of realistic challenges that are significant features of human political and social life, namely imperfect knowledge, bounded by rationality and opportunistic behaviour” (p. 7). This perspective suggests that some institutions presupposed by Rawlsian theory will actually fail to produce their purported goals. For example, postulating state ownership of substantial capital resources in order to secure fair distribution would only work if the actual people in charge of the distributing knew the best allocation and were immune to political motivations.

I want to especially draw potential readers’ attention to Cowen’s game-theoretic formalization, in Chapter 2, of the famous O. Henry story “The Gift of the Magi,” which he instructively contrasts with the more familiar “prisoner’s dilemma.” Just as in the prisoner’s dilemma, suboptimal outcomes are achieved by the self-interested actions of participants who lack perfect knowledge, the “gift of the Magi” scenario shows how purely altruistic actors who lack perfect knowledge also achieve suboptimal outcomes. Besides being intrinsically interesting, this section does a fine job illustrating the importance of voluntary exchange as a coordination method.

What Cowen ultimately wants to show is that Rawlsian commitments to real civic egalitarianism are better served by the sorts of institutions typically favored by classical liberals: democratic governance with constitutional protections of markets, property, and voluntary exchange. For Cowen, “a set of basic economic liberties should have priority alongside civil and political liberties” (p. 172). The Rawlsian model of property-owning democracy (POD) is susceptible to criticisms about its oblivion towards the knowledge problem and the self-interestedness of political actors. Cowen suggests a new model of property-owning democracy that includes these insights. So it is not that Cowen thinks inequality isn’t a real problem, but rather that a version of property-owning democracy that satisfies the “robustness” criterion would be more successful and stable.

Cowen has a very subtle yet powerful argument about why this would be so: “The notion that POD is an alternative to capitalism relies substantially on a Marxian definition of capitalism, as necessarily structured by class. This can be contrasted with more straightforward descriptive definitions as a regime that legalises the market process and permits private ownership of capital. It is the Marxian definition that commends a highly redistributive POD” (pp. 172 – 3). This is an incredibly important insight on Cowen’s part: the claim that “capitalism” must be unjust because it generates vast inequality, both economic and political, hinges on how the word “capitalism” is defined. On the Marxian understanding of the word, the power of the state helps maintain the power and privilege of the well-off, who benefit from the exploitation of the lower class’s powerlessness. This both creates and perpetuates inequality. But on the liberal definition of the word, economic activity isn’t political in the first place, and fortunes rise and fall based on factors other than “pull.” So inequalities may arise spontaneously, but—and this is Cowen’s main selling point—the same system that gives rise to them is more capable of ameliorating them, precisely because it eschews cronyism and other problems described by the robustness framework (and by catallactics, and by public choice). “A welfare state that is in debt and reliant on progressive taxation can end up preserving the wealth of the relatively advantaged while reducing incentives to work....A differently configured POD might contribute to institutional robustness by allowing individuals to benefit from a number of alternative sources of material welfare....In this sense, a wider distribution of capital can represent a polycentric alternative to the state redistribution or determination of income” (p. 173). Cowen understands the ways in which relying on state power to produce just outcomes inadvertently empower the state to harm the most vulnerable. This is truly insightful and important.

In general, one expects to find critics of Rawlsian social justice arguments accused of being oblivious to the realities of poverty and inequality. This is almost always a straw man argument, but it is most certainly wrongheaded if applied to Cowen. Cowen’s project is specifically about why the inequality is dangerous, what causes it, and how best to ameliorate it. No one could read this book and level such a charge. But more than that, Cowen makes his case with care and precision. He articulates the best case his opponents have and replies to those with solid argumentation. It’s a very compelling and persuasive book, and it’s a very important contribution to how we think about inequality and institutions.