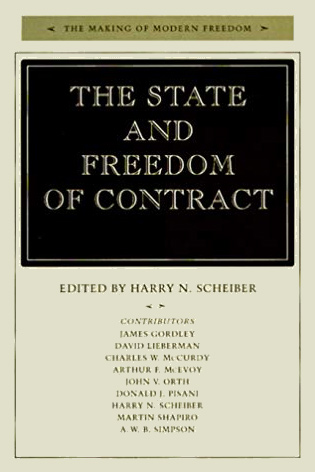 The State and Freedom of Contract
Edited by Harry N. Scheiber
Hardcover Paperback
This book review appeared in the Summer 2000 issue of The Independent Review.

Because contracts are at the heart of a free-market economy, it is not surprising that contractual freedom has long been a vital concern for jurists and scholars. With some important exceptions, American law has traditionally left private parties free to advance their own interests through contracts. Courts enforced agreements but did not supervise the substantive content of bargains. As Joseph Story pointed out (Commentaries on Equity Jurisprudence, 14th ed. [Boston: Little, Brown, 1918], vol. 1, 337): “Every person who is not from his peculiar condition under disability is entitled to dispose of his property as he chooses; and whether his bargains are wise and discreet or profitable or unprofitable or otherwise are considerations not for courts of justice but for the party himself to deliberate upon.” This understanding of contract law was supportive of individual decision-making, and it had sweeping implications for the evolution of modern society from a social order grounded on a fixed and closed hierarchy. In 1861 Henry Sumner Maine famously declared that “the movement of the progressive societies has hitherto been a movement from Status to Contract.” (Ancient Law [1861; reprint, London: J. M. Dent, 1954], p. 100).

Deep regard for the autonomy of private contracting informed the process of fashioning constitutional limitations to governmental authority. The contract clause of the Constitution was designed to halt state legislative interference with existing contractual arrangements. Under the leadership of Chief Justice John Marshall, the Supreme Court employed the contract clause vigorously to safeguard both public and private contracts from state abridgment, and thereby clearly linked contract and constitutional law. Fueled in part by the ideology of the antislavery movement, courts and commentators in the nineteenth century gradually insisted that freedom of contract enjoyed constitutional protection. Revealingly, the Civil Rights Act of 1866 specifically listed the right “to make and enforce contracts” among the safeguarded liberties. Reflecting the vital role of freedom of contract in the polity, the Supreme Court concluded that the right to enter contracts was among those liberties protected by the due process clauses of the Fifth and Fourteenth Amendments. Although legislators might seek to justify restrictions on this right by pointing to public health and safety considerations, courts treated liberty of contract as the constitutional baseline. Justice George Sutherland explained (Adkins v. Children’s Hospital, 261 U.S. 525, 546 [1923]) that “freedom of contract is . . . the general rule and restraint the exception.”

Because of its close association with economic individualism, freedom of contract was increasingly challenged in the twentieth century. Concerned about inequality in bargaining power, critics sought to restrict the realm of private contracting, especially with respect to employment relations. Freedom of contract was stripped of its constitutional base during the New Deal era, and thereafter a host of labor, environmental, and consumer-protection statutes made substantial inroads on contractual autonomy. Likewise, the laws governing residential leases were overhauled to curtail free bargaining and impose protection for tenants. Indeed, one could easily marshal evidence that the rights and duties of parties were, at least in some situations, again determined by status, not contract. More dramatically, by the 1970s leading scholars were proclaiming that contractual freedom was dead, a casualty of the simultaneous growth of legal realism and the welfare state. (See Grant Gilmore, The Death of Contract [Columbus: Ohio State University Press, 1974], and Patrick S. Atiyah, The Rise and Fall of Freedom of Contract [Oxford: Clarendon, 1979]). These dire predictions, however, proved premature, and notions of liberty of contract have demonstrated remarkable staying power. Indeed, prominent scholars have recently revitalized traditional theories linking freedom of contract and economic liberty with prosperity and political freedom.

Against this contested backdrop, the essays collected in The State and Freedom of Contract, edited by Harry N. Scheiber, provide a thoughtful point of departure for analyzing the growth and change of contractual freedom over time. The essays span centuries, ranging from the land and labor laws of medieval England to current issues concerning globalization of the economy. Emphasizing that the concept of freedom of contract is malleable and has taken on different meaning in various contexts, the authors as a group are skeptical about the historical basis for contractual freedom as a constitutional limit on governmental authority. They are generally sympathetic with Progressive-era and New Deal calls for less reliance on individual contracting and more government oversight to protect the disadvantaged.

The authors examine freedom of contract from a number of chronological and geographic perspectives. A. W. B. Simpson notes that English common law was traditionally preoccupied with landed property, not contracts. He points out that in England land became increasingly alienable, strengthening the dominion of owners. John V. Orth discusses the key place of labor relations in the acceptance of contractual freedom as part of the transition away from mercantilist workplace regulations. In his essay James Gordley probes the wellsprings of the will theory of contracts, which he attributes in large measure to the decline of natural law in the nineteenth century. David Lieberman’s chapter points out that leading English theorists recognized some constraints on contractual freedom, and that customary norms limited private economic ordering.

Later chapters concentrate on American developments. Harry N. Scheiber contends that the interplay between economic liberty, as exemplified by marketplace bargaining, and the community’s need to promote and regulate economic behavior continues to shape the law. He notes that public controls have preempted some areas of activity once governed by private contracting. Charles W. McCurdy provides a penetrating assessment of the debate over freedom of contract at the start of the twentieth century, giving particular attention to the application of the doctrine to labor-protective statutes. He also examines the supposed rejection of freedom-of-contract principles, observing that the Supreme Court simply washed its hands of the matter and did not encourage enactment of social legislation by adopting the notion of inherently unequal bargaining. In his essay Arthur F. McEvoy builds on McCurdy’s insight in a study of the relationship between free contract ideology and labor relations. Despite the sustained Progressive critique of free bargaining, McEvoy finds that the New Deal in fact preserved a large measure of private contractual ordering with respect to labor relations. Donald J. Pisani presents a sweeping survey of governmental policies regarding land and natural resources from the eighteenth century to the present. He carefully studies the post-1960 environmental movement and discusses its implications for private ownership and contractual freedom. Martin Shapiro’s essay considers the impact of a global economy on contracting practices, and effectively uses the historical analysis of freedom of contract developed in earlier chapters to inform our thinking about how contracts may be treated in this novel setting.

Taken together, the essays convincingly demonstrate that theories of a right to contract, without regard to any societal constraints, lack historical support. The complex and changing nature of contractual freedom does not sustain such a simplistic view. After all, courts recognized limitations to liberty of contract even during the heyday of laissez-faire constitutionalism, sustaining a good deal of regulatory legislation. (See James W. Ely, Jr., The Chief Justiceship of Melville W. Fuller, 1888–1910 [Columbia: University of South Carolina Press, 1995], 95–103.) But at the same time it does not follow that the right of individuals to pursue their economic goals through private contracts is without a constitutional foundation.

Perhaps unwittingly, the editor of this volume has helped to vindicate the historical argument for constitutional protection of economic liberty, including contractual freedom. Scheiber aptly notes “the extent to which the ideals associated with economic liberty have been absorbed into the legal culture since the late eighteenth century, and even to the present” (p. 125). Similarly, McEvoy concludes that, despite regulations, “freedom of contract remained the norm in employment bargaining” (p. 227). Given the persistent high standing of contractual freedom throughout much of American history, judicial decisions upholding freedom of contract have deep intellectual roots in our society. The appearance of this book is, in a sense, a testament to the continuing vitality of the classical freedom-of-contract doctrine. Several of the authors express concern about an apparent revival of interest in economic liberty by scholars and lawmakers.

The ongoing debate over freedom of contract is a barometer of changing attitudes toward the proper role of government in economic life. One may agree with McEvoy that “rumors of free contract’s demise appear to have been somewhat exaggerated” (p. 233) while also acknowledging that contractual liberty is a knotty concept that has not evolved in a linear manner. This fine book offers a rewarding examination of a major theme in Anglo-American legal history, and it should be of wide scholarly interest.