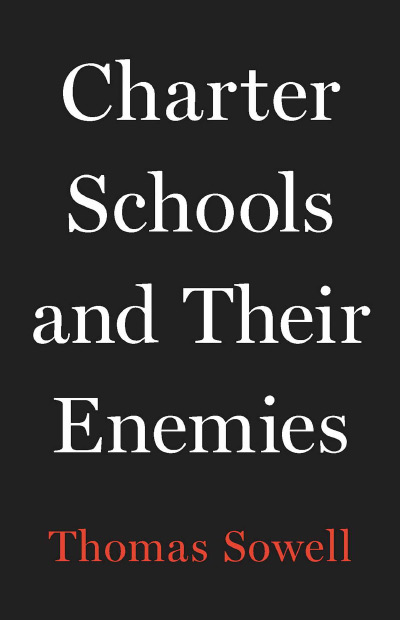 Charter Schools and Their Enemies
Thomas Sowell
Kindle Hardcover Audiobook Audio CD
This book review is a web exclusive for the Fall 2020 issue of The Independent Review.

Charter Schools and Their Enemies marks a personal milestone for Thomas Sowell. It is his fifty-sixth book, published on his ninetieth birthday.

As Sowell’s readers have come to expect, Charter Schools reflects long and deep thought. Many of his books have taken a long time to see print (see his website), and this is no exception. In the preface, he traces the genesis of Charter Schools back to a conversation in the early 1970s, which then resulted in two articles in the mid-1970s. What brought him to develop his thinking further now are the increasing political dangers threatening charter schools under the flag of “reform,” which further undermines “the urgent task of educating young people in the skills that will determine what kind of future they will have available as adults” (p. 120).

Sowell’s opening dedication, “To those children whose futures hang in the balance,” captures the importance and urgency of the subject admirably (p. iii). So does his repeated insistence throughout the book on asking “what possible benefit to the education of children could be expected” (p. 123, emphasis in the original), from a policy or practice, in order to overcome the fact that “the central function of a school—to educate students—receives remarkably little attention, compared to other things that preoccupy some adults” (p. 99).

The opening chapter begins by referencing the “extremely different conclusions” that people have reached about the success or failure of charter schools, despite their rapid growth (in the face of political and procedural constraints that Sowell discusses later in the book) since the 1990s, fueled by parental demand that continues to generate long waiting lists and lotteries for available slots (p. 1). With massive amounts of data collected and reams of studies, it would seem that more agreement should have been reached.

Unfortunately, as Sowell writes, “One major complication in studies comparing public charter schools with traditional public schools is that the racial, ethnic, and socioeconomic backgrounds of students in the charter schools as a whole turn out to be very different from those of students in traditional schools,” which makes it “hard to know how much of whatever differences there may be in educational outcomes ... are due to the schools themselves and how much are due to their different mix of students from different ethnic and socioeconomic backgrounds” (p. 2).

In response, Sowell seeks to reduce such confounding issues, and the excuses and misrepresentations they enable, as much as possible, to “compare educational results among truly comparable students in truly comparable circumstances” (p. 4, emphasis in the original). That leads to comparing student results on New York’s English language arts and mathematics tests “in the same grade levels in particular charter schools with particular traditional public schools located in the same buildings” (p. 4). It results in similar ethnic compositions of the students, similar school environments, and similar home locations, with students taking the same tests.

Detailed comparisons for each of five different New York City charter school networks and their public school counterparts, backed up by sixty pages of extensive test score data in appendix 1, are presented in chapter 2. They focus on the percentages of students achieving a ranking of proficient (level 3), above proficient (level 4), and the lowest (level 1), two steps below proficient, a score which puts further advance at great risk.

Extending these and other results to all charter schools in New York City, Sowell finds that “the patterns turn out to be strikingly similar” (p. 49). In fact, he writes, “In many cases, the disparities in educational outcomes between New York City charter school students and traditional public school students, educated in the same buildings, were greater than the black-white educational differences” that have caused such controversy over the years (p. 49).

In chapter 3, Sowell turns from the “remarkable success” of the charter schools studied to the striking level of hostility arrayed against them by public school teachers and administrators, their unions, schools of education, and politicians seeking union backing. And the reason is simple: “It is successful charter schools that are the real threat to the traditional unionized public schools” (p. 52, emphasis in the original).

The discussion in chapter 3 regarding the extent of the hostility toward charter schools and the sorts of restrictions teachers’ unions wish to impose on them is a must read that is both fascinating and depressing. Those most serious about improving educational results, especially for those facing the worst options, will feel their blood pressure rising sharply, starting with a list of what teachers’ unions have supported doing to charter schools. Unions have taken these actions, for which there are “usually no educational benefits to students for which a fact-based claim can be made to seem even plausible,” even though “schools supposedly exist to provide educational benefits to students” (p. 55, emphasis in the original). Perhaps most striking are the many examples of blatant dishonesty and other subterfuges used to deny charter schools space to operate, but which are hidden from public view.

For example, Detroit, with worst-in-the-nation educational results, imposed a “residential use only” proviso to a sale of unused school buildings to keep them from use by charter schools. Cincinnati did the same with a “not for use by schools” clause. Milwaukee used a “no competing use” clause in the same way. Cleveland tore down, used for storage, or categorized as “miscellaneous” thirty closed buildings to do the same. Washington, D.C., converted unused and underused schools to administrative purposes, including use by other government agencies and nonprofit organizations, and turned other properties into apartments, retail use, etc., despite a legal requirement of a “right of first refusal” for charter schools. San Jose offered space away from the intended community, making a charter school impractical. Tucson sold a school building for just under $1.5 million to a rival bidder after a charter school had offered $2.1 million for it, wasting public resources to beat the implementation of a law that would have prevented it. But perhaps the most egregious was when Oakland revoked the charter of the American Indian Model Schools based on claims that were both unfounded and irrelevant, even though it had been the highest-performing school in Alameda County and Newsweek rated it as one of the top hundred public high schools in the nation.

These and other examples may completely change the way readers, previously unaware of the many abuses inflicted, view the groups who so assiduously feather their nests at the expense of educating children, while loudly and persistently asserting that everything they do is for the children.

Chapter 4 focuses on claims that charter schools are not “accountable,” unlike public schools. Unfortunately, public school teachers and administrators are almost solely accountable to the government and unions for following required procedures, illustrated with several headshaking examples, and they use every excuse possible to keep high-stakes tests from revealing their often dismal educational results or affecting their incomes or jobs. They are almost completely unaccountable to parents for student learning. In contrast, charter schools are highly accountable to parents who can very easily remove their children if they produce poor educational results. Further, public schools’ lack of sufficient financial accountability for the buildings justified as educating students has allowed administrators to find ways to keep unused and underused public school space out of the hands of the charter schools, which are the only real options many poorer people have for better educating their children, even when laws have prohibited that result.

Chapter 5 deals with student differences, the most notable being differences in attitudes toward education. In charter schools, which are in primarily minority communities, “motivated minority students are educated among other motivated minority students.” When combined with stricter discipline in charter schools, this allows those students to “freely pursue academic achievement” (p. 95). In contrast, through mandatory attendance laws, financial incentives tied to attendance rather than learning, and eroded discipline, public schools often let “some disruptive and violent students ruin the education of a much larger number of other students who are in school to learn” (p. 111).

Chapter 6 is about increasing dangers to the often far superior options offered by charter schools. The key danger is that even though charter schools have demonstrated the ability to close long-lamented test score gaps and have revealed multiple excuses for that result as misleading rhetoric rather than reality, there is a rising trend of anti–charter school “reforms.” As Sowell lays out, that reformation could be better termed deformation, because it increases both external restrictions and internal impediments to charter schools, lining up remarkably well with the desires of teachers’ unions to restrict the only practical alternatives many poor and minority parents might have to escape the monopoly control and attendant failures of their neighborhood public schools (indicated by the long waiting lists for charter schools, when they are allowed to exist), “independently of whether the quality of education in those charter schools is good, bad, or indifferent” (p. 115, emphasis in the original).

Demonstrating the abuses that charter schools have been subjected to, and the heightened extent to which politics is now furthering institutional arrangements that virtually guarantee “that incumbents’ vested interests are going to prevail over the interests of schoolchildren’s education,” then takes up most of chapter 6 (p. 131). And, as Sowell writes, “The stakes are huge—not only for children whose education can be their one clear chance for a better life, but also for a whole society that needs productive members” (p. 132). Those stakes make the book’s main conclusion crucial:

Important as it is to try to get rid of institutionalized practices that cannot even plausibly claim to be about improving educational quality, at the present juncture it may be an even more urgent priority to prevent still more such institutional handicaps to educating children from being imposed in the future (p. 131, emphasis in the original).

Thomas Sowell’s Charter Schools and Their Enemies is worth reading for anyone who wants to improve children’s educations and lives, particularly for those with the most limited options. By penetrating the curtain between what has been done and what the public is aware of, it allows a much clearer understanding of just how much the education of students is sacrificed to the interests of incumbent public school unions and teachers. Given what the book reveals about the commonplace bad-faith abuses and hypocrisy of public school interests, that also guarantees Charter Schools will be heavily attacked by those exposed to greater light. Fortunately, Sowell also provides useful insights for judging such sure-to-come attacks.