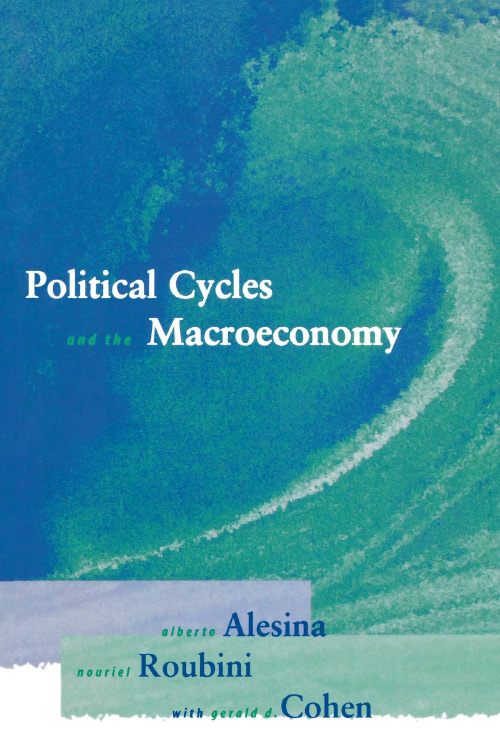 Political Cycles and the Macroeconomy
Alberto Alesina and Nouriel Roubini with Gerald D. Cohen
Paperback
This book review appeared in the Fall 1998 issue of The Independent Review.

More than two decades ago, articles by William Nordhaus and by Douglas Hibbs launched the systematic study of the relationship between political motivations and the nature of macroeconomic policies and outcomes. Nordhaus, perhaps inspired by watching the machinations of the Nixon administration in its recent reelection drive, created a model to show how the desire for reelection might lead incumbents to stimulate the economy just before elections, with adverse effects to be experienced subsequently (“The Political Business Cycle,” Review of Economic Studies 42 [1975]:169-90). Hibbs presented an econometric demonstration that unemployment is lower and economic growth is higher under Democrats than Republicans, and an estimate of how much (“Political Parties and Macroeconomic Policy,” American Political Science Review 71 [1977]:1467-87).

Those two articles stimulated a great deal of research and scholarship elaborating and testing opportunistic electoral-cycle models in the tradition of Nordhaus and partisan models in the tradition of Hibbs. At the same time, macroeconomics was undergoing the rational-expectations revolution, which challenged the then conventional Keynesian wisdom that politicians could control the performance of the economy.

The field of macropolitical economy blossomed under those two countervailing developments. The first was a logical extension of the public choice “movement,” dating from the mid-sixties, into macroeconomics. That development involved the scholarly recognition that policy makers do not necessarily act as benevolent dictators maximizing the general welfare, but rather may maximize their own political goals. Those goals have been operationalized as maximizing votes, ideological goals, or some combination of the two.

The second development, in its starkest form, led to the “policy ineffectiveness proposition,” attributed to Robert Lucas. This proposition asserted that macroeconomic policy makers were in a game not against nature but against economic agents who understood the economy, were already optimizing, and might act so as to defeat policy interventions by the government. The implication was that policy makers could influence real macroeconomic variables such as growth and unemployment only by surprising economic agents. (There was still no doubt that policy makers could influence inflation, a nominal variable.) Moreover, rational economic agents could not be repeatedly surprised or fooled. The implication was that the kind of political manipulation that was presumed by the hypotheses of opportunistic and partisan models would be defeated by rational agents in the economy and the electorate.

Since then the study of politics and economic performance has become far more sophisticated and has taken full account of rational expectations. Alberto Alesina is one of the leading scholars to adapt that new theory of macroeconomics to the possibility of political goals and motivations on the part of policy makers. And Political Cycles and Macroeconomics is the most comprehensive and authoritative statement of scholarship in this field. It is a theoretical and empirical statement of the state of the art in political macroeconomics. It contains a review of alternative theories and fresh empirical tests. It builds on a decade or more of empirical work by Alesina, with the present colleagues and others, and by many other scholars.

Alesina and his colleagues begin with an intellectual map of opportunistic and partisan theories, for each of which there are traditional models with an exploitable Phillips curve and models that are consistent with rational expectations. The conclusions are that the rational choice and rational expectations theories are more successful than their more traditional predecessors and that the partisan model is more successful than the opportunistic model in explaining macroeconomic behavior. That is, the designated winner on both theoretical and empirical grounds is “rational partisan theory,” of which the leading scholar is Alberto Alesina himself. The theories are tested with data for the United States and for most of the developed economies in the Organization for Economic Cooperation and Development (OECD).

A chapter each is devoted to the theoretical structure of opportunistic and partisan models. There the formal logic of the traditional and the rational models is developed mathematically, with attention to both government activity and voting behavior. Each of these two chapters concludes with a table of contrasting empirical predictions that sets up the tests in the empirical chapters to follow.

Although the book’s empirical work pertains to most OECD nations, there is a separate chapter devoted to political cycles in the United States. Descriptive data regarding inflation, unemployment, and growth are presented, organized by party and position in the electoral cycle. Hypotheses are tested on data for the period from 1947 through 1994. Results support the rational partisan theory and fail to support opportunistic electoral cycle hypotheses. For nonspecialists the most telling evidence in favor of the “rational partisan” theory, as opposed to the traditional theory, is that differences between the parties on unemployment and growth are confined to the first half of administrations, in response to the element of surprise in electoral outcomes, but the differences dissipate in the second half.

The authors present even more striking evidence in favor of rational models in a chapter on “Polls, Electoral Uncertainty and the Economy.” There they present and test an “electoral option model.” This does not serve to predict or postdict elections. Rather, it serves to reconstruct probabilities of electoral outcomes as seen at the time. For example, the electoral option model’s prediction of Dewey rather than Truman as the 1948 winner is seen as a strength, because it is a confirmation of the actual surprise occasioned by Truman’s victory. This model is also applied to financial markets in an analysis that should be read by skeptics about rational expectations.

Two chapters extend the theoretical analysis to eighteen OECD economies for the period 1960-1993. This analysis permits verification of the empirical tests regarding the theories tested with U.S. data, and it introduces some institutional variation that allows for richer hypotheses. For example, fourteen of the eighteen countries have endogenous rather than fixed election timing. That feature provides an opportunity for “passive opportunism”: calling an election when the economy is prosperous should be a lot easier than making the economy prosper on the eve of an fixed election day. However, there is little evidence of this variant of opportunism. Another institution that varies across countries is the independence of the central bank, and the authors have a chapter that restates the rationale for independence, but here they do not test their theory empirically as they do for most other theories in the book.

One of the most interesting chapters deals with “Political Parties, Institutions, and Budget Deficits.” The authors divide governments into three types: single party, coalition, and minority. They find no systematic variation among the types for either very loose or very tight fiscal policies. However, they do find that coalition governments perform much less well than either of the other types in adjusting successfully to exogenous fiscal shocks. The authors compare the likely effectiveness of numerical constraints on fiscal irresponsibility, such as balanced-budget rules, with procedural institutions, such as flexibility and transparency. They make some observations on the relationship between single-party/majoritarian and coalition/proportional representation systems with respect to moderation and gridlock. Those comments contribute to the study of comparative politics as well as to the study of political economy.

Political Cycles and the Macroeconomy is a state-of-the-art presentation of an important field bridging economics and political science. Although the technical level of the book is high (some chapters have more than a score of equations), the book is accessible to serious readers and will be rewarding to them. It simultaneously advances the study of macroeconomics and the study of political processes and institutions. It is a fine book.