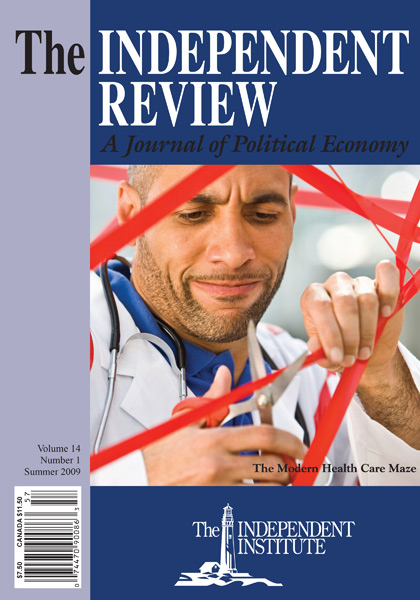 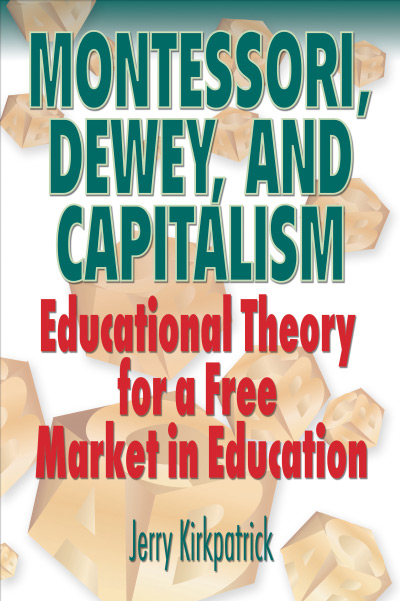 Montessori, Dewey, and Capitalism
Educational Theory for a Free Market in Education
Jerry Kirkpatrick
Kindle Hardcover Paperback
This book review appeared in the Summer 2009 issue of The Independent Review.

As Thomas Jefferson famously said, “If a nation expects to be ignorant and free in a state of civilization, it expects what never was and never will be.” But overcoming ignorance in order to live in a free society is a largely neglected topic, even though it is more important than ever, as the evidence grows daily that young Americans are not learning how to think. For example, literature professor Thomas F. Bertonneau recently analyzed the student exams for his world literature class and noted, “The inability of many students to cognize even such basic elements as story—first ‘A’ happens, then ‘B’ happens, and so forth—is alarming” (What, Me Read? [Raleigh, N.C.: Pope Center for Higher Education Policy, January 16, 2008]).

The modern failure of U.S. public schools to impart even such basics as reading and arithmetic has made educational instruction a battleground in the national “culture wars.” Yet most of the conflict pertains to establishing the rudiments, not to fostering intelligent, actively thinking persons who can evaluate and solve problems.

So it is refreshing to see that a professor of business, Jerry Kirkpatrick, has written a book about educational theory as a whole and about the philosophical concepts on which it is based. Montessori, Dewey, and Capitalism is an attempt—and a generally successful one—to take the best tenets of progressive education and apply them to modern reality. By “reality,” this author means the way people actually live—and should live—in a modern, capitalist society. Although the title does not identify the third major figure in the triumvirate, it is Ayn Rand.

“Most significantly, what adults in a capitalist society need to possess are the knowledge, value, and skill of how to make independent judgments,” Kirkpatrick writes (p. 192). Thus, he aims to articulate a theory of education that allows children to become free-thinking adults, not limited by adult repression, bureaucratic stagnation, or disengagement from thought (“mental passivity”). This goal clearly reflects his libertarian orientation—he wants Americans to want to be free—but those with other views of education may share the approach as well.

Developing and explaining this theory involve a great deal of philosophical background, most of which I cannot evaluate. Although Maria Montessori’s concept of “concentrated interest” is the bedrock of Kirkpatrick’s theory, he also goes back to the ancients, including Plato and Quintilian, to find its precursors. He explains and illustrates his points well, but his discussion is studded with assessments of complex philosophical concepts such as intrinsicism, rationalism, and volition. He appears to be an autodidact who relishes analytical detail, more so perhaps than his readers do.

Even so, the basic idea is largely a commonsense application of what is now considered “progressive” education as pioneered by education reformers Montessori and John Dewey. Kirkpatrick does not spend much time on Dewey (because Montessori’s approach is more concrete), but he does want to rehabilitate Dewey and separate him from some of his simplistic (and statist) disciples.

Kirkpatrick argues that the biggest block to achieving independence of thought is children’s interruption by (often well-meaning) adults who want them to learn specific things at a specific time by a specific method. In his view, these demands frustrate the natural process of education because children must drop their absorption with solving a problem or meeting a challenge, which is the essence of learning. As a result of these interventions, children figure out how to please an adult or avoid an adult’s irritation, but they miss the self-affirming experience of self-directed learning.

Kirkpatrick’s “theory of concentrated attention” relates to the aim of enabling young people to develop their ability to think independently. It starts with the notion that children learn by becoming interested in something, focusing their attention on it, and seeking to achieve a goal with it or through it. He uses Montessori’s approach to education as the chief illustration. Montessori surrounded children with an environment (that is, carefully selected objects that they could work with) that attracted their attention and spurred them to achieve a goal. So, for example, a three-year-old might become interested in putting wooden cylinders in holes in a piece of wood. The child becomes absorbed in the process, is led to think about the sizes of the holes, which cylinders will fit, and how to fit them, and achieves success by putting all the cylinders in the holes.

A big part of learning consists of succeeding by focusing one’s attention on achieving a self-selected goal. This idea sounds progressive, but Kirkpatrick departs from most progressives by recognizing that developing “naturally” is not enough. Children also need teachers to help them learn facts and how to relate facts, concepts, and reality. He even praises lecture classes for older students, but the classes need to be part of a process that allows the students themselves to be in charge of much of their learning.

A natural follow-on to the child’s concentrated interest is conceptualization, illustrated by recognizing that the idea of “table” as different from a specific table. (According to Kirkpatrick, this recognition happens through what Rand called “measurement omission” as the child moves from the concrete, measurable table to a nonmeasurable abstraction). As students progress, they should be introduced to increasingly complex concepts, then to principles and to what he calls ranges of measurement—again, a Rand idea that keeps a concept from being so abstract that it is irrelevant to reality. At this point (if I follow correctly), Kirkpatrick also brings in Rand’s requirement that inductive and deductive reasoning be used appropriately.

Kirkpatrick proposes a similar process for teaching children to apply values, not simply concepts. Although he seems judicious in his analysis overall, he accepts without question the Freudian concept of the subconscious (but does not use it wildly). He also seems to have a knee-jerk antipathy to the medieval era as a church-dominated, oppressive period. Thus, he does not mention the medieval liberal arts, the trivium and quadrivium, elements of traditional education that are currently popular in some circles.

Besides laying out the theory, Kirkpatrick includes a chapter in which he criticizes state-controlled, bureaucratic education and proposes a free market in education, but that proposal is not the heart of his mission, which is to help children learn to conduct intellectually sound thinking applicable to the real world and for them to respect their ability to do so. His confidence that this objective can be achieved is somewhat comforting. Thinking well is not an arcane art, it appears. Montessori schools are certainly pervasive these days, and if the other learning concepts can build on Montessori’s foundations, the nation might produce good, independent thinkers.

The problem is that hardly anyone is paying attention to educational theory. Education schools are mired in social justice rhetoric, and, as I indicated earlier, discussion of educational method seems to be more at the level of squabbling. Perhaps philosophy or psychology departments are looking into educational theory, but if they are, I would be surprised. My guess is that this book and the ideas it incorporates will languish unless an important educational figure champions them. Perhaps someone will do so. Perhaps the poor quality of our undergraduates’ thinking will force a reassessment of K-12 education. If a public intellectual such as Diane Ravitch, an academic scholar such as Sandra Stotsky, or a policy analyst such as Frederick Hess called attention to the need to rethink the purpose of education and how it can be accomplished, there would be hope for these ideas that Kirkpatrick has laid out. Whether anyone will pick them up and apply them remains to be seen.