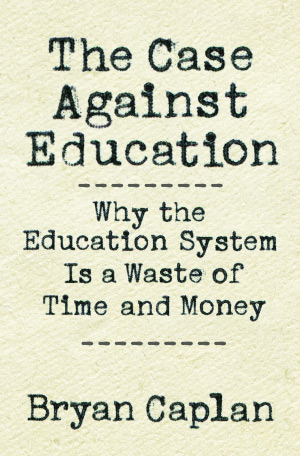 The Case against Education
Why the Education System Is a Waste of Time and Money
By Bryan Caplan
Kindle Hardcover Paperback Audiobook MP3 CD
This book review appeared in the Spring 2019 issue of The Independent Review.

I don’t want Bryan Caplan to be right. For many years, I have worked to reform higher education in the belief that the system is broken but ultimately repairable. Caplan’s new book, The Case against Education: Why the Education System Is a Waste of Time and Money, says otherwise.

Caplan’s basic premise, that our sprawling system of secondary and postsecondary education is largely wasteful, is hard to swallow. What about the fascinating courses? The brilliant lecturers? The breakthrough scientific innovations? The towering libraries filled with the history and insight of the many scholars who have gone before? Surely all of this wouldn’t exist without good reason.

And what about the relentless rush of data showing that, on average, college graduates earn significantly more money than high school graduates? And that high school graduates, in turn, vastly out-earn their peers who dropped out of high school? The data and the conventional wisdom apparently agree that education, if approached seriously, is a worthwhile investment.

Caplan debunks or incorporates these arguments, as relevant, with his theory of signaling. College, he says, is mostly a signal to employers that a graduate is intelligent, conscientious, and conformist. Employers value these traits. Thus, they pay more for employees who have successfully completed a degree than for those who have not. “The labor market doesn’t pay you for the useless subjects you master,” Caplan says; “it pays you for the preexisting traits you reveal by mastering them” (p. 13).

Caplan is careful to say that education is not exclusively a signal. He admits that there is some element of human-capital creation that explains the high returns to education. In particular, he notes that statistics and econometrics are useful in many data-driven occupations as well as in everyday reasoning and that the simple reading, writing, and arithmetic learned in elementary school are necessary basics for almost all future learning and working.

But his critics maintain that education is mostly human-capital creation—that is, education pays because students learn real skills valued in the market. Caplan uses a simple question to demonstrate the difference between the two competing theories. “Imagine this stark dilemma: you can have either a Princeton education without a diploma, or a Princeton diploma without an education. Which gets you further in the job market?” (p. 27).

Any sane person would choose the degree without the education. That’s because a degree from Princeton will open the doors of the job market. It is the degree, not the education, that confers the many benefits of college matriculation: more money, prestige, and career stability. After all, Caplan points out, a Princeton education is already free. Anyone can show up to Princeton courses—but their work won’t be graded or credited.

Caplan also provides data to further bolster his claims—too much to include it all here. He shows that the most lucrative years of education are those that are accompanied by a credential. The rewards for completing a single year of high school, Caplan observes, are not uniform. Completing the senior year is far more valuable than completing the freshman, sophomore, or junior years. The same is true for college. Caplan calls this credential correlation “the sheepskin effect” and explains the data: “High school graduation has a big [pay] spike: twelfth grade pays more than grades 9, 10, and 11 combined. In percentage terms, the average study finds graduation is worth 3.4 regular years. College graduation has a huge spike: senior year of college pays over twice as much as freshman, sophomore, and junior years combined” (p. 98).

(Incidentally, this is why students with some college but no degree are among the most likely to default on their student loans. They have incurred some of the costs but almost none of the visible benefits of higher education. Employers treat them almost as if they never attended college at all.)

In addition to amassing evidence for signaling, Caplan thoroughly debunks the idea that formal education significantly contributes to human-capital creation for most students. He cites evidence on the failed transfer of learning, the lack of durable improvements from education, and the abysmal results of college graduates on various measurements of critical thinking.

For example, he shows that first-year and fourth-year college students score the same on tests of informal reasoning; that evidence attributing IQ increases to extra years of schooling are conflating measured intelligence with genuine intelligence; and that schools teach very few job skills that employers actually find useful. The data are impressive—and interesting. Caplan concludes, “[H]uman capital purism looks not just overstated, but Orwellian. Most of what schools teach has no value in the labor market. Students fail to learn most of what they’re taught. Adults forget most of what they learn. When you mention these awkward facts, educators speak to you of miracles: studying anything makes you better at everything. Never mind educational psychologists’ century of research exposing these miracles as soothing myths” (p. 68).

These data shouldn’t be shocking to anyone interested in higher-education reform. They doubtless already know that college students show little improvement on standardized tests from freshman to senior year, know little of the scientific method, and routinely fail man-on-the-street interviews on simple civics questions. What’s more, college students themselves intuitively understand signaling. That’s why they skip class, search around for professors who give easy A’s, and cram for tests instead of committing the material to long-term memory. They know it’s the degree that matters to future employers, not the content of their courses.

From this sobering evidence, Caplan concludes that although there are considerable personal benefits to ever-increasing years of education (which he painstakingly measures), there are no corresponding societal benefits (also painstakingly measured). In fact, there are significant costs. That’s because most of the information provided by signaling is mere redistribution: “If education boosts compensation solely by raising worker productivity, society’s gain equals the worker’s gain; if education boosts compensation solely by revealing worker productivity, society gains far less. For most purposes, in fact, society gains zero” (p. 167). Education is a very expensive process for revealing worker productivity—and much of it falls on the taxpayer.

Caplan maintains that education either reveals individuals’ tendencies toward behaviors that benefit society (e.g., tendencies against criminal activity or toward political participation) or changes individuals’ rankings relative to others with whom they are competing. The purported health effects of education fall into the latter category. Caplan posits that the positive effect on health is a covert effect of status on health. He observes: “Insofar as schooling makes you healthier by raising your status, its health benefits are zero-sum: you can’t raise your rank without dragging others down” (p. 171). Again, of course, Caplan painstakingly measures and documents it all.

In short, extra years of education do confer some benefits. Students do learn some useful skills. But most of the process is an enormously wasteful shifting of resources from some groups of people to others.

Caplan concludes his arguments with an almost heretical prescription: “we need lots less education” (p. 195). Perhaps a modified version would read: we need “lots less formal education” or “lots less schooling.” Caplan’s prescription stands in stark contrast to the conventional wisdom and even most books by educational reformers—who conclude that we still need formal education, but that we’re doing it all wrong.

But Caplan’s data are compelling. The theory of signaling aligns with much that we know to be true about higher education. And even if signaling explains only half of the so-called gains from education, it offers reason enough to examine the whole system. After reading and reviewing the book, I am a convert.

Anyone interested in the economy, the workforce, or education policy would do well to pick up Caplan’s book but should be prepared to confront all of their former assumptions.