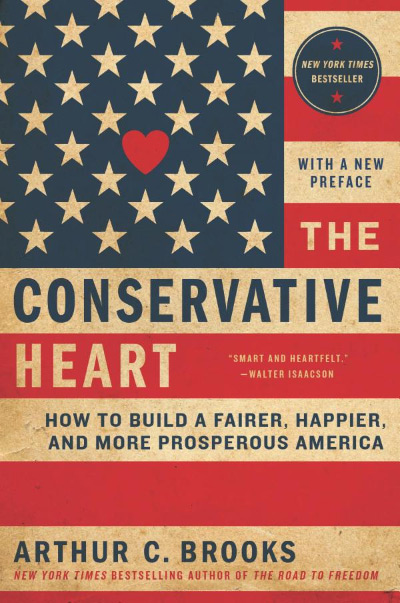 The Conservative Heart
How to Build a Fairer, Happier, and More Prosperous America
By Arthur Brooks
Kindle Hardcover Paperback Audiobook MP3 CD
This book review is a web exclusive for the Spring 2016 issue of The Independent Review.

Although Arthur Brooks’ book is titled The Conservative Heart, it might just as aptly have been titled The Libertarian Heart, and perhaps even The Liberal/Progressive Heart. Its goal is to share a compassionate world view, findings from social science research and practical advice to build a broad coalition for achieving goals that are embraced by almost everyone—building a fairer, happier, and more prosperous society. Brooks (president of the American Enterprise Institute) argues that the central paradox of American politics is that conservatives’ ideas are better at achieving these goals but are sometimes dismissed because too many people think conservatives care only about themselves. Their inability to demonstrate their compassion in the political arena has trapped us in a mire. The problem seems to be that many people think compassion is spending other people’s money in expensive but vain attempts to solve problems, rather than getting to the roots of the problems and empowering people to solve them by themselves.

The irony is that liberals often mistakenly view conservatives as greedy materialists. Of course many self-proclaimed conservatives are quite greedy, as are people of all political stripes. “Materialism is tyranny, and no ideology or economic system is immune to it” (p. 43). But true conservatives, Brooks argues, are actually less materialistic than average, as is demonstrated by giving larger fractions of their incomes to charities, having larger families and being more willing to donate blood (“if liberals and moderates gave blood like conservatives do, the blood supply in the U.S would instantly jump by about 45 percent” (p. 139)). Conservatives’ success in escaping the all-too-human cycle of “grasping and craving” (p. 41) often arises from the fact that they are more likely to focus on religious and spiritual matters, realizing the relative unimportance of material possessions. Perhaps excessive materialism is another example of lack of self-control. Interestingly, recent studies suggest that conservative also exhibit more self-control than others (see Science Daily, “Conservatives Demonstrate More Self Control than Liberals, Studies Suggest,” June 22, 2015).

How can we make America happier and more prosperous? Brooks argues that work is the key. Most economic models naively see work as a bad thing that humans want to avoid. Perhaps this was somewhat accurate when the workweek was seventy hours of mind-numbing or back-breaking labor, but it’s much more plausible to see work as a blessing, to see earned income as true income. It turns out that Americans like their jobs. So, why hasn’t America won the war on poverty? In a material sense we have won it—standards of living for today’s poor are dramatically higher than when the war was declared a half century ago. But ultimately the war has been lost, Brooks argues, because there are still many poor people who live broken, miserable lives: “fewer paychecks, more welfare checks, and no meaningful increase in earned success. Trillions in government spending have not bought us more hope or more opportunity—only a little less material misery” (p. 64). It appears that the war has been lost because we have taken so many of our best troops—the poor themselves—off the battlefield and because basic training (our dysfunctional education system) is woefully inadequate.

The book’s most compelling chapter examines the Doe Fund and the power of work for transforming the lives of homeless men, ex-convicts and drug addicts. These men testify that work—beginning with pushing a bucket and broom, sweeping the streets and sidewalks of New York City—gives meaning to lives. Former gang member Dallas Davis explains, “I started realizing I wasn’t just picking up trash from the streets. I was picking up values, morals, and principles” (p. 85). Outside of Hollywood, almost all successful people know that work and leading an upright life are the keys to success and yet many hold the poor to a lesser standard: “Creating a separate set of moral standards according to socio-economic status is not an act of mercy. It is a crime against the poor. It is an abdication of our social duty to hold one another accountable. It is shameful that our self-styled elites are so afraid to preach the very secrets to success they so readily practice in their own lives. ... When we refuse to hold people to high standards, we aren’t taking pity on them. We are robbing them of their opportunity” (p. 98). People are assets. Work is a blessing. Values matter most in lifting people up. Never grow tired of doing what is right.

The implication is that policy makers don’t need to make people work, they just need to let them work—something that a high minimum wage discourages. But Brooks goes one step further, arguing that we should also encourage low-income workers through subsidies such as the Earned Income Tax Credit—which he believes should be extended to childless adults. He argues adamantly that a social safety net for the truly needy and indigent is a core conservative value (and perhaps it’s a core libertarian value too, see Michael Munger, “One and One-Half Cheers for a Basic-Income Guarantee: We Could Do Worse, and Already Have,” Independent Review, Spring 2015). Disappointingly, Brooks ducks the hard question of how high and broad this safety net should be.

His central advice is that conservatives should begin with moral principles and expose the sometimes holier-than-thou superiority of their opponents for what it too often becomes—a crude vote-buying attempt at selling redistribution, which boils down to crass “materialism tarted up to look like moralism” (p. 17). Doing this is easier said than done because too many angry “conservatives” have muddied the waters. Yet, survey data compellingly show that conservatives are substantially happier than others. If these people, such as Brooks, can steal the microphone from choleric “conservative” ranters, the battle might be won.

Another potential strategy (and I hope this doesn’t come across as rent seeking): Brooks reports that simply learning economics helped him learn that “market forces tend to win out even when we don’t want them to, and that good intentions are no guarantee of good results ... that we can’t change behavior just by passing a law against something we don’t like ... that many social problems are not fixable through government programs” and that democratic capitalism has helped “billions of poor people to build their lives” (p. 5). That’s a bottom line that I’ve helped to document. I found that taking an introduction to economics course increases students’ belief in the fairness of market outcomes—such as increasing prices when demand rises and middlemen earning a profit—and increases their rejection of price ceilings. This is especially true among female students and occurs for professors across the ideological spectrum (see Robert Whaples, “Changes in Attitudes among College Economics Students about the Fairness of Markets,” Journal of Economic Education, Vol. 26, no. 4, Fall 1995).