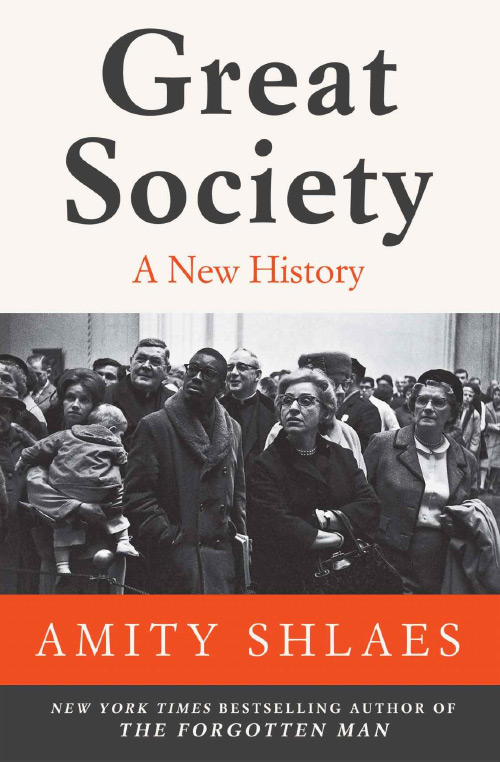 There is a standard narrative about Lyndon Baines Johnson. He was Saul, oppressing minorities (“breathing out threats and slaughter,” Acts 9) and being actively complicit in segregation in Texas, and in the U.S. Senate. That story of his birth and (self)creation are told in the landmark multivolume history written by Robert Caro (The Years of Lyndon Johnson. New York: Knopf, 1982, 1990, 2002, 2012) and read by almost everyone.

But then, as we all know, LBJ became Paul, converted by light on the road to his own Damascus: “And he trembling and astonished said, Lord, what wilt thou have me to do? And the Lord said unto him, Arise, and go into the city, and it shall be told thee what thou must do.” The assassination of John F. Kennedy gave the “new” LBJ the chance to act, reversing not just his own efforts at segregation but creating an entire new Great Society that cured poverty and ended prejudice of all kinds.

Or, not, as it turns out, as we learn in the remarkable telling of the gifted Amity Shlaes in Great Society. The LBJ conversion may have elements of truth, though it’s not clear he ever had any principles at all, before or after conversion. And, before going on, let me distance myself from the “states’ rights” folks who would still lament the passage of the Civil Rights Act of 1964 or the Voting Rights Act of 1965; the states had shown themselves unwilling to protect the basic rights of U.S. citizenship, and so had abdicated their (otherwise valid) claim to protection from federal interference.

The real story of Great Society is the description of the origins, motivations, and implementation of the dog’s breakfast of programs known as Johnson’s “Great Society.” The account begins with a bit of personalization, in the form of the person of Michael Harrington, who wrote about socialism in theory and was given an opportunity to try to move U.S. policy toward socialism in fact. This authorial conceit by Shlaes, using one person and their thoughts as a way of reducing a huge movement to a scale the reader can identify with, is often used. In some ways, it’s similar to the introduction to Nancy MacLean’s Democracy in Chains (New York: Penguin, 2017), with the difference that Shlaes is writing factual history rather than imaginative fiction.

Shlaes deftly makes the turn from Harrington and his being called to Washington and an absorbing account of the larger picture. As I see it, four factors combined to make the Johnson et al. program appear attractive, at least from the vantage point of 1965. These factors were:

Interestingly, and I think rightly, Shlaes notes that the “break” in 1968, with the election of Richard M. Nixon and the end of the standard narrative of St. Lyndon, was more like a continuation and expansion. Nixon exploited the centralization of power in attempts to expand federal control over health care, the environment, guaranteed incomes, and eventually the money supply and detailed management of the price level. In short, there was a lot more going on than a conversion in the mind of President Johnson, and there was a lot more damage, permanent damage, to the economy and to the welfare of the supposed “beneficiaries” of the anti-poverty programs than is usually acknowledged by the Great Society acolytes.

The strength of Great Society is its systematic and well-sourced treatment of the nuts and bolts of the Great Society programs. As with many revolutionary movements, this one was not planned or organized from the top, but was hijacked by a relatively small number of aggressive ideologues. The problems of race and poverty were real, and intertwined. But government action, ranging from federal discrimination in housing policy and access to farm loans to state-level restrictions on voting and access to rule of law in property rights disputes, were largely the cause of these disparities. The idea that the government was the solution to these problems is breathtakingly arrogant, the equivalent of having a fire department setting fires all over a city and then lauding the city for being able to put the fires out.

Toward the end of the “Great Society” era, in 1971, Saul Alinsky (Rules for Radicals. New York: Random House, p. 89), summed up the approach:

“Communication for persuasion, as in negotiation, is more than entering the area of another person's experience. It is getting a fix on his main value or goal and holding your course on that target. You don't communicate with anyone purely on the rational facts or ethics of an issue....It is only when the other party is concerned or feels threatened that he will listen—in the arena of action, a threat or a crisis becomes almost a precondition to communication.”

In this context, the very real problems of segregation and urban poverty, combined with the other factors listed above, created a population that (rightly) felt “threatened.” And the idea that “we have to do something” was adroitly directed to the goal held in common by the Great Society cadre: socialism, or something close to it.

As Shlaes notes (p. 5), there was a widespread dissatisfaction with the pace of change and improvement: “Civil rights law that had not [even] desegregated train stations or schools, the construction of interstate highways that didn’t seem to help the poor, urban renewal funding that didn’t seem to meet the needs of all. Now the country wanted more, faster.” Shlaes’ ability to marshal the narrative and anchor it in accounts of real participants, operating on many fronts with no central plan but with an increasingly shared purpose, is on masterful display here.

The striking thing about the whole Great Society movement is not that it wanted to destroy capitalism; instead, there was a naïve faith that capitalism could not be destroyed, or slowed. The economy would always be able to produce the revenue necessary to fund new programs. The only difficulty was summoning the political will to divert these riches in more fair and equitable directions. Similarly, the Great Society “brain trust” blithely assumed that they would be able to ignore the power of states, and especially of cities, in achieving their goals of centralization.

Unsurprisingly, a strange and unorganized coalition of business and city governments fought a ragged but in many places effective guerrilla war, recognizing that power once lost to the center was likely to stay there. Shlaes’ chapter, “Revolt of the Mayors,” is revealing to the extent that the disagreement was not really about ideology—the mayors of Chicago, Los Angeles, Newark, and other cities in the “revolt” were all safely run by Progressives—but about power.

From the mayors’ point of view, the very demeanor of the Johnson Administration and the lawmakers on the Hill betrayed a disconcerting arrogance in regard to cities. The Washington of the Great Society seemed to wish for a single, obedient interlocutor in its dealing with towns . . . . “We need some leadership,” [Robert Kennedy told Los Angeles Mayor Samuel Yorty]. Yorty hit back: Los Angeles did not need a new senator . . . to tell [it] how to run itself. Los Angeles was imperfect, but it was undoubtedly succeeding . . . .Yorty was making the point for all the mayors: decentralization didn’t always spell disenfranchisement or incompetence. (p. 157).

What I learned from Great Society is not so much that the Great Society cadre didn’t understand economics — though they didn’t understand economics, it’s true. The real problem was that they didn’t understand, or didn’t care to think in terms of, politics. Perhaps there is no way the program could have succeeded in any case. But having the political genius of LBJ distracted by the war in Vietnam meant that power and authority were delegated to precisely those activists who thought in terms of confrontational community organizing, a tactic that completely alienated the state and municipal authorities on whom implementation of the programs depended.

Great Society is a terrific book, engaging, informative, and ultimately depressing. There really was (and still is) a problem with urban poverty. And there was (and is) an enormous drain in terms of treasure and talent directed toward that problem. But the solution has made the problem no better, and in cases such as the destruction of vibrant poor neighborhoods in favor of the construction of vertical ghettoes, segregating cities under the name of “urban renewal,” has made things much worse. But the story needed to be told in detail, and backed by research. Amity Shlaes is to be congratulated for telling the story so well.