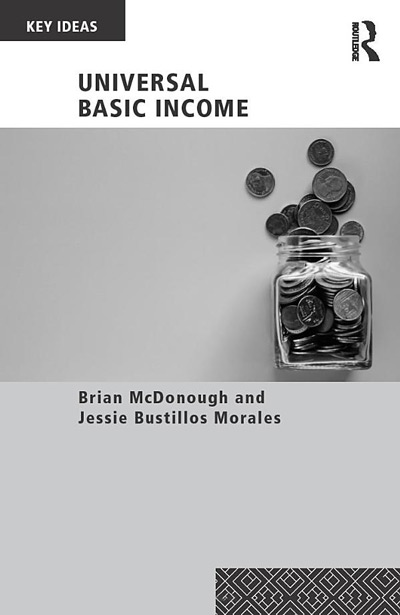 Universal Basic Income
By Brian McDonough and Jessie Bustillos Morales
Kindle Hardcover Paperback
This book review is a web exclusive for the Fall 2022 issue of The Independent Review.

“We are also owned by the private owners for whom we work and who own the capital produced through our labour”
—Brian McDonough and Jessie Bustillos Morales (p. 31)

It’s difficult to write a balanced book, but it can be aspired to. We all have biases, and when we state them up front they tend to be accepted. Claiming it “provides a balanced account of basic income, weighing up the pros and cons from a number of different positions” (quoted on the back cover), Universal Basic Income by Brian McDonough and Jessie Bustillos Morales is sadly one-sided from even the introductory passages, where all arguments against universal basic income (UBI) are accompanied by brief rebuttals. On the other hand, very left-wing presuppositions are stated uncontested and unchallenged as though they were self-evident facts. This extends to the Marxist view that the employment relationship between an employee and an employer is exploitative, rather than one of voluntary exchange for mutual benefit. The authors assert, “Capitalism is a system developed to produce profit, not benefit the mass members of society” (p. 22) which is an incredible claim in light of the fact that capitalism is almost entirely mass production for the masses, and it is the masses who decide what capitalists produce by how they spent their money, and that under capitalism the mass members of society have attained a level of material prosperity unrecognized in all of history.

Passages in favor of UBI are argued vigorously and at length, while criticisms are treated as asides and hardly argued for. This is typified in chapter two where a lengthy rebuke of the “libertarian” view of freedom is given, but an actual explanation of the libertarian view of freedom is only given one sentence. The word libertarian is not even defined which may be confusing to students who don’t have the requisite background knowledge in the philosophy of laissez faire.

The propensity of the authors to be hospitable to extreme views on the left (such as the quote from above: “We are also owned by the private owners for whom we work and who own the capital produced through our labour”) while excluding even the most modest admission that markets (capitalism) increase living standards would make it completely impossible for them to produce a responsible, even-handed book weighing up the merits and shortcomings of UBI. The authors state at one point that the necessity for everyone to work is just imposed upon people by “neoliberalism” (whatever that buzzword means) but they don’t mention that it’s people working that creates all the wealth we enjoy and that if less people work there will be less to go around. They acknowledge that jobs are precarious for low-skilled workers but forget to mention that becoming dependent on a government handout because you don’t learn skills that would help you support yourself is also extremely precarious. At one point they quote, with credulity, a UBI advocate who writes, “there’s never been a worse time to be a worker with ‘ordinary skills’” (p. 55) which shows a shocking, almost unbelievable, disregard for history, considering that a couple hundred years ago, farm laborers had to literally huddle together to keep warm during the winter.

In the section that considers real-world trials of Universal Basic Income programs, the authors state that: “Contrary to the idea that ‘free cash’ will dissuade people from entering full-time employment and therefore stifle economic growth, many basic income examples provide evidence to show that communities can become more prosperous from the implementation of a universal basic income” (p. 66). They fail to give a balanced view by even mentioning the two main criticisms of these pilots. (1) In a local study, the money to provide the basic income is taken from outside the population that is meant to benefit from it—so of course they are going to become richer. But the people funding the study are necessarily poorer—and their relative outcomes are not being measured. And (2) the people taking part in these trials know ahead of time that they will only be receiving the money for a short period, and so are more likely to save it or invest it wisely than if they knew it was a permanent fixture. I don’t think the authors omitted these concerns out of deliberate negligence, of course, but maybe they should have interviewed some strident UBI critics to attain a balanced view.

The book successfully addresses some of the most important arguments in favor of UBI—such as (1) that it could be less bureaucratic to run and save money on administration costs (if it is even possible to remove public sector administrators from their jobs), (2) that it would “emancipate” workers and women giving them freedom to choose what to do with their time, and (3) that it would remove “poverty traps” which can arise when poor people who gain more work see their take-home pay increase by an insignificant amount because they lose benefits and pay more taxes. They quote Malcolm Torry (2016, Citizen’s Basic Income, London: Darton, Longman, and Todd):

“In the UK, a family receiving Housing Benefit, Council Tax Support, Working Tax Credits, and with the main breadwinner earning enough to be paying Income Tax and National Insurance Contributions, can find that each extra £1 they earn will benefit the family’s net income by just 4p. This is because Income Tax and National Insurance Contributions will be deducted from each additional £1 earned, and the additional earning will cause means-tested benefits (in this case, Working Tax Credit, Child Tax Credits, Housing Benefit, and Council Tax Support) to be reduced.”

Universal Basic Income also hits on some fruitier arguments such as the highly counter-intuitive proposition that giving people free money to buy stuff with could be better for the environment (?!).

On the flip side, the chapter “Against a Universal Basic Income” is given short shrift at less than twenty pages, and many of them dedicated to exploring other welfare alternatives and pro-capitalist arguments for UBI. The authors state at the outset that the majority of studies and writing on UBI is favorable, which may be correct. That said, this absence is even more reason to dig deeper and come up with some serious pushback. Fill in the gap!

The chapter mentions a “culture of dependency,” with a UBI reinforcing typical gender roles by encouraging women to stay home, and that tighter borders may have to be enforced to stop economic migrancy. They also mention that a UBI will require higher taxes, but the only argument they can come up against higher taxes is that the wealthy may move abroad to avoid paying them. What about the right to what one earns? What about the “Nation of poets” argument? That a transfer of wealth will be made from those working long hours, doing the “heavy lifting,” to those who use their UBI to pursue hobbies—and that the more we get of the latter the less people will be willing to do the former, vastly reducing the overall wealth created in society, making people poorer in the process? What about the fact that it’s the reinvestment of wealth into capital that creates all the cheap goods and services that make us so prosperous? What about the possibility of runaway inflation caused by people looking at UBI currency as “Monopoly money”? What about the prospect of a future government using UBI in the manner of the Chinese “Social Credit System” to browbeat people into compliance, as the UBI utopian dream degrades into a dystopian nightmare? (See my essay, “Universal Basic Income: A Dream Come True for Despots,” Mises Wire.)

Sadly, there is too much to say about the potential unintended consequences of UBI that is left unsaid by this book.

I get the sense that the inability to check the underside of ideologies, anticipate unintended consequences, and consider opportunity costs stems from the primarily sociological background of the authors. Identifying the benefits of a policy is easy—but the art is digging deep enough to anticipate whose expense they are won at, and what the new incentives are likely to lead to further on down the line.There is a general hostility towards economic liberty and a lack of understanding of the fact that it is markets that have so far raised living standards of the poor, even prior to welfare states, by giving them access to cheap goods and creating a society wealthy enough to pay them more, and in fact it is capitalism that has created the wealth to fund the welfare state. Without this understanding one will necessarily fall into the widely held fallacy that the only way to help the poor is to give them money—when, so far, it has been the investment ofwealth in factories, machines, research and technology (rather than its redistribution) that has taken us out of hovels and created the affluence—unseen before in all of history—which even poor people in rich countries enjoy today.