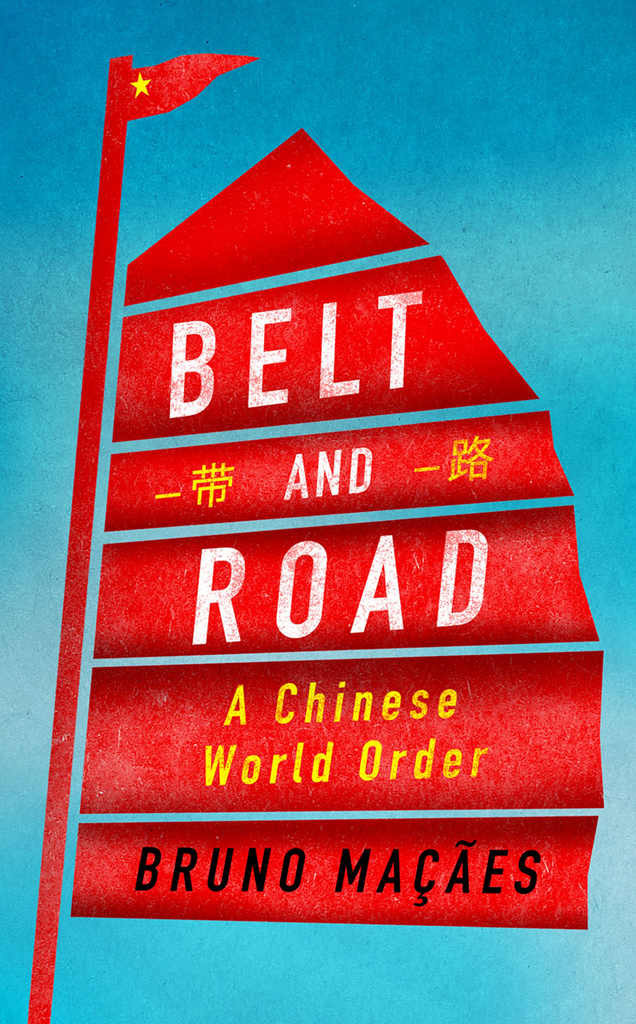 Belt and Road
A Chinese World Order
Bruno Maçães
Kindle Hardcover Paperback
This book review is a web exclusive for the Summer 2020 issue of The Independent Review.

I first encountered Bruno Maçães when he was interviewed by Tyler Cowen (Bruno Maçães on the Spirit of Adventure, Episode 50. Conversations with Tyler [September 2018]). With Maçães having recently completed a six-month overland journey across the Eurasian supercontinent while researching for his book, The Dawn of Eurasia (London: Penguin Random House UK, 2018), Cowen asked him to design a dream tour for someone with two or three weeks to spend in Eurasia. Maçães responded “the best would be fly to Kashgar in China...then cross the border into Pakistan, and perhaps go down all the way to Lahore and then Delhi,” in the process making “one of the classical trips, to go from China to India by land.” Hearing this, I was struck with the sense that Maçães was a thinker with a uniquely credible perspective worth paying attention to, having spent significant time on the ground in locations across Eurasia where China has a growing presence. Having undertaken the first part of the route described by Maçães myself during the summer of 2014, traveling south from Kashgar down the Karakoram Highway to the Khunjerab Pass (the border of China and Pakistan), my curiosity was piqued to begin a more systematic investigation of the role of China in the developing world. This serves as the entry point to my interest in Maçães’ Belt and Road: A Chinese World Order, the subject of this book review.

By way of introduction, the Belt and Road Initiative (BRI) is Beijing’s transcontinental investment and policy project spanning at least 70 countries, aiming to facilitate enhanced global economic integration. Maçães provides a very well-organized approach to BRI, the first two chapters of the book providing an overview and the “Nuts and Bolts” of BRI, while the final three chapters address what BRI means for the world economy (chapter 3), world politics (chapter 4), and the world more generally (chapter 5). Maçães skillfully balances a vast array of details in describing BRI with his clear and nuanced arguments of what BRI means for these specific areas. For scholars and readers alike interested in development economics as well as public choice, there are an abundance of applications to be pursued.

Made up of massive infrastructure investment projects in the developing world, BRI is carried out primarily by Chinese state-owned enterprises (SOEs) funded by Beijing’s state and policy banks. BRI is made up of two components, including the land-based “Silk Road Economic Belt” (SREB) and the sea-based “21st Century Maritime Silk Road.” The “Belt” aims to connect Chinese trade and investment to Europe through road and rail infrastructure projects from China throughout Eurasia, while the “Road” aims to bolster Chinese maritime trade through Southeast Asia, the Horn of Africa, and Europe largely through port infrastructure projects. All of BRI is to be done according to “five cooperation principles” laid out by Beijing, leading to “win-win cooperation” that promotes common development and prosperity. Introduced initially in 2013 by Chinese President Xi Jinping as “One Belt, One Road,” OBOR was officially rebranded in 2016 as the “Belt and Road Initiative.” While comparisons to the ancient Silk Road are often made, BRI is aimed at much more than reviving Silk Road trading routes. Rather, “in Beijing’s eyes a Belt is a space of deep economic integration” (p. 25), with BRI serving as a means to enact “a global order infused with Chinese political principles and placing China at its heart” (p. 30). I will focus here on two of Maçães’ core arguments, one related to Chinese “global value chains,” and the other related to how China views itself in the world.

First, drawing attention away from a country vs. country mode of analysis, Maçães argues that the relevant margin of BRI is that of countries moving into, or better yet establishing, increasingly efficient and dynamic “global value chains.” This concept, similar to the idea of a supply chain, at its core refers to the notion of internationally joined-up production. Of this, Maçães writes “more often what happens is that German-led value chains —including many international production stages—will be competing against Chinese-led value chains” (p. 80). This view is well-captured by Richard Baldwin (The Great Convergence: Information Technology and the New Globalization. Harvard University Press, 2016), who points out that due to advancements in information technology, developing nations are now much more easily able to join already established international production arrangements due to the dramatically lowered costs of moving ideas and coordinating complex processes over distance. Accordingly, the effective boundaries of geographic competition have shifted away from national boundaries and towards international production networks.

While massive BRI investment in rail, highway, port and powerplant projects attract the lion’s share of media attention, Maçães suggests this is to overlook the subtle margins that really matter. As discussed by Andrew Polk (China is Quietly Setting Global Standards. Bloomberg, May 6, 2018), if the successful implementation of BRI involves the supplanting of western standards by Chinese standards, “it will represent a direct threat to the profitability of non-Chinese companies.” With Chinese SOEs partnering with Kazakh companies on an $800 million copper and cobalt project in the Democratic Republic of Congo, a best case scenario for China involves the creation of new value chains with itself occupying the most lucrative segments of production and organization. Notably, western companies are absent from this picture. Here, BRI functions as a transnational industrial policy, providing Beijing the means to facilitate movements “from Made in China to Created in China, from China Speed to China Quality, and from Chinese Products to Chinese Brands” (p. 85). Accordingly, BRI projects like the Pakistani port and city of Gwadar (having received $500 million aimed at housing construction for five hundred thousand Chinese professionals by 2023), referred to as the “crown jewel” of the China Pakistan Economic Corridor (CPEC), should be viewed as “a tool in the service of larger goals” (p. 43). Maçães captures this well, noting “If Kazakhstan serves as China’s gateway to Europe, Pakistan is its gateway to the Indian Ocean,” explaining that Pakistan “may become China’s California, granting it access to a second ocean and resolving the Malacca dilemma” (p. 64).

Second, BRI is fundamentally about how China views itself in the world, and how other countries should position themselves with respect to China. Maçães does well to anchor the nuts and bolts substance of BRI within the broader context of Chinese history. When President Xi speaks of BRI, language of renewal and rejuvenation is employed. The new China (powerful and wealthy) is to be one “striving for achievement” (p. 18), moving “from passivity to agency” (p. 165), and away from the attitudes of the China of former times (weaker and poorer), including Deng Xiaoping’s notion of “hiding capacity and biding time” (p. 32). This puts the “century of humiliation” (1839-1949), a period of repeated defeats delivered to China at gunpoint at the hands of western powers and later the Japanese, further and further in the rear view mirror. Beijing’s strong emphasis upon the central role of BRI comes sharply into focus when viewing BRI as one of, if not the, primary engines to accomplish a national revival. Accordingly, Maçães argues that BRI represents “the transformation of China from a regional into a global power” (p. 23).

Maçães argues that the historical Chinese concept of Tianxia (“All-under-Heaven”) and its connection to the historical Tributary System provides critical intuition for understanding the intentions and actions of Beijing with respect to BRI. “Under this hierarchical order,” Maçães writes, “foreign states, attracted by the splendor of Chinese civilization, voluntarily submitted to the Chinese court and became vassals. ... The system was a means of endowing the entire known world with a single political order” (p. 34). Notably, this is antithetical to the Western mode of association, one that prioritizes the autonomy of individual units, emphasizing clear boundaries and proper relations between units. One can readily see the parallels BRI has with this concept. Each overture of infrastructure investment made by the Chinese to a developing nation, be it Kyrgyzstan or Zambia (which as of 2017, have external debts owed to China in terms of their GDP of 30.5% and 23.4%, respectively), represents a decision node; as Maçães puts it, “Participants in the Belt and Road are thus pushed to a position where only two options are possible: agreeing to its basic tenets and goals or declaring oneself on the wrong side of history” (p. 37).

While Belt and Road does many things well, left to be desired in Maçães’ analysis of BRI are considerations of knowledge and planning. BRI projects are contracted outside the nexus of market exchange, largely between Chinese SOEs, policy banks, and participant governments. Being non-market-facing, the relevant actors are unable to access the information provided by market profit and loss and price signals reflective of consumer preferences and opportunity costs. While there’s little doubt that Chinese funds are facilitating more infrastructure projects to be built, this is an all-together different consideration from whether these projects are actually value-adding. As Tom Miller (China’s Asian Dream: Empire Building along the New Silk Road. London: Zed Books, 2019, pp. xv-xvi, 176-177) points out regarding BRI projects, “there are legitimate concerns over its economic value,” as many projects are subject to “downright inadequate” planning (something admitted by the head of China’s state export-credit insurer). Miller goes on to note that “Chinese officials privately admit that they expect to lose up to 80 percent of their investment in Pakistan.” If BRI is, in fact, actually not about producing projects of economic value, and instead about assuaging domestically powerful interest groups (i.e. state owned enterprises) or providing SOEs with external markets to deal with overcapacity, the widespread existence of infrastructure boondoggles would make more sense. While the true story is likely a mixed bag of useful infrastructure and boondoggles, it is my view that Maçães overrates the ability of Beijing, via its SOEs and policy banks, to coherently implement its BRI plans.

Lastly, it is my view that Maçães underrates the extent to which power dynamics underlie BRI outcomes. “To reduce the BRI to a Machiavellian ruse,” Maçães argues, “is to overlook the larger forces explaining it. ... Machiavellian politics is the wrong way to look at Belt and Road” (pp. 31, 34). That said, an examination of Beijing’s revealed preference may suggest reason to doubt this. John Hurley, Scott Morris, and Gailyn Portelance (Examining the Debt Implications of the Belt and Road Initiative from a Policy Perspective. Washington: Center for Global Development, 2018, pp. 21-22) argue BRI’s debt sustainability for participant countries will be largely a product of how multilateral BRI is. While the founding of the Asian Infrastructure Investment Bank (AIIB) by Beijing in 2014, along with its adoption of multilateral development bank rules, signaled positive prospects in this regard, in practice Chinese lending via AIIB takes up a very small share (roughly 2 billion USD) of Chinese official lending. In contrast, Chinese lending through bilateral channels accounts for 30 to 40 billion USD of annual lending, with the Chinese Export-Import Bank and China Development Bank accounting for at least 75% of Chinese official overseas lending between 2000 and 2017 (see Sebastian Horn, Carmen M. Reinhart, and Christoph Trebesch, China’s Overseas Lending. NBER Working Paper No. 26050, 2019). To his credit, Maçães adds the caveat, “It may transpire that, even though China does not intend the Belt and Road as a geopolitical project, as a project of state rivalry, it may ultimately function in this manner, against China’s wishes” (p. 32). Indeed, costly and opaque projects around the world have consistently generated a pattern of suspicion and hostility among local populaces from Myanmar to Montenegro, and Kyrgyzstan to Sri Lanka. As I monitor BRI’s progress, if indeed Beijing truly does not intend BRI as a geopolitical project, they are failing to convey this in any meaningful way.