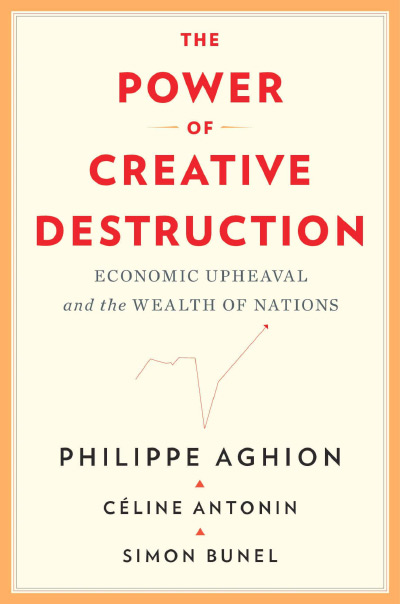 The Power of Creative Destruction
Economic Upheaval and the Wealth of Nations
By Philippe Aghion, Céline Antonin, and Simon Bunel
Kindle Hardcover Audiobook
This book review is a web exclusive for the Spring 2022 issue of The Independent Review.

Philippe Aghion, Céline Antonin, and Simon Bunel trace the evolution of economic development through the lens of creative destruction to reconcile historical enigmas concerning the growth process and highlight the importance of innovation. Across fifteen excellent chapters, economic phenomena, such as inequality, deindustrialization, and globalization, are dissected to demonstrate how creative destruction, while generating both economic opportunity and upheaval, is actually part of the solution to unintended consequences of growth. The Power of Creative Destruction will be of interest to economists and other social scientists given the state-of-the-art research methodologies, informed by the credibility revolution it showcases and numerous avenues of future research it explores. Moreover, it contains important insights for the optimal design of innovation-led growth that should interest policymakers, while its non-technical writing complemented by graphical illustrations will attract members of the public interested in the role of innovation in economic growth. Empirical evidence from both France and the U.S. is utilized throughout the book, making it of relevance to both European and American audiences.

Chapter 2 identifies concepts in the growth process, including the middle-income trap and secular stagnation, which require an alternative explanation to neoclassical and Keynesian economic models. Initially, technological explanations alone are considered to account for the sustained growth takeoff from the 1820s. Yet, employing a purely technological approach to predict historical growth patterns proves inadequate; the authors develop a more inclusive model that interacts both technological and institutional factors reflecting three key elements of the creative destruction paradigm: growth from accumulation of knowledge, protection of property rights, and the presence of a competitive environment for firms with unobstructed market entry and exit.

The authors then examine whether technological revolutions should be welcomed to reap the benefits of implied secondary innovations or prevented to avoid job losses associated with automation. In agreement with Michael Munger’s Tomorrow 3.0: Transaction Costs and the Sharing Economy (New York: Cambridge University, 2018, pp. 123 – 41), the authors unequivocally recommend that technological revolutions be embraced since market agents closer to the technological frontier stand to yield greater returns from innovation shocks. Evidence suggesting a negative association between aggregate-level automation and wage growth is reversed by their empirical analysis of firm-level data due to the presence of a productivity effect allowing for relatively innovative firms to grow and increase employment over time. It is concluded that automation can, similarly, lead to employment gains at the aggregate-level; this argument could have been further developed since microeconomic findings may not hold true at the macroeconomic level. The thesis rests on the existence of a parallel eviction effect associated with employment losses among non-innovative firms “missing the critical juncture of automation,” as seen in Figure 3.6 where non-innovative firms are more likely to be displaced in the advent of automation (pp. 53–4), that could have been further developed following Philippe Aghion, Céline Antonin, Simon Bunel, and Xavier Jaravel ("What Are the Labor and Product Market effects of Automation? New Evidence from France," SSRN [February 2020]).

Central to their arguments about the importance of innovation is a decomposition of the effect of creative destruction according to the distance of each firm or country to the technological frontier. Categorizing firms as frontier or laggard, the authors are able to explain the inverted U-shape relationship between growth and competition. In an elegant fashion, they demonstrate the complementarity between competition and intellectual property (IP) rights by showing how increased competition reduces the rents of noninnovators whereas stronger IP rights increase the rents of innovators, further increasing the net gain from innovation. Although horizontal industrial policies are generally preferable, the authors also support nonhorizontal industrial policies in the presence of path-dependence or coordination problems. However, it is unclear why the state should persist favoring inefficient practices as opposed to subsidizing the costs of breaking away from path-dependence to adopt new, superior technology, in line with the directed-innovation argument for environmental subsidies of green technology (pp. 183 – 4).

In subsequent chapters, the authors employ innovation and creative destruction to resolve a series of economic conundrums starting with secular stagnation stemming from dominant firms. They contend that market forces alone are insufficient in preventing the productivity gap between innovative, frontier firms and noninnovative, laggard firms from increasing. Government action is needed to alleviate the discouragement effect on laggard firms to innovate along with a rigorous competition policy that encourages innovation in the long-term. Policies focusing on institutional changes promoting innovation are the solution to escaping the middle-income trap, starting with imitation-driven growth policy to reach a level of industrialization and then, frontier-innovation policies to attain the highest level of development as in post-WWII South Korea. Industrialization is posited as a necessary step in a country’s development with the notable of exception of India which bypassed the stage of industrialization with positive environmental implications that are typically overlooked. This leads to a discussion of the interplay between innovation and environmental protection identifying policy instruments to stimulate sustainable growth; namely, carbon taxes that correct negative externalities from pollution and directed innovation through subsidization of green innovation on a temporary basis, a claim subject to the same concerns as the infant industry argument for protectionism. The analysis accurately underscores how behavioral factors relating to environmental awareness are as critical as government action in addressing climate change, albeit information on their starkly different costs is omitted. The optimal climate change policy response should also consider that government interventions are costly and require time to implement, whereas behavioral strategies including mass media campaigns or nudging are relatively costless and highly scalable.

To address innovation opportunity inequities arising from differential family backgrounds, the authors emphasize the role of education in providing a level playing field. Innovation is sparked by basic research at the university level where a pool of knowledgeable agents shielded by academic freedom are more likely to undertake riskier innovative projects and face strong incentives to share acquired knowledge. Underinvestment in basic research can be alleviated by increasing its openness through relaxation of property rights with empirical evidence confirming significant productivity gains. At first blush, this policy recommendation appears at-odds with the notion that IP rights should be vigorously protected. Careful reading is necessary to infer that the latter only applies to applied research conducted by firms.

The authors address concerns about adverse effects associated with innovation such as job loss and risks to happiness by incorporating individual experiences with creative destruction in their model to obtain a positive correlation between creative destruction and job growth or happiness in the U.S. as in Philippe Aghion, Ufuk Akcigit, Angus Deaton, and Alexandra Roulet (“Creative Destruction and Subjective Well-being,” American Economic Review 106 (12) [December 2016]: pp. 3869 – 97). In addition, they identify labor market structures that enhance both innovation and social welfare such as the Danish model of “flexicurity” (p. 221), which simplifies dismissal procedures while providing generous unemployment benefits and training opportunities that prepare workers to reenter the labor market. The authors stress the importance of alternative incentive systems that reward highly innovative projects despite a low probability of success and the availability of funding mechanisms that target young investigators of exemplary potential rather than projects. Regarding firm financing, they clearly show that venture capital is the optimal tool for advancing innovation.

Globalization, a subject of renewed interest with the revival of protectionism policies in the U.S., is shown to have a negative effect on voters’ openness to trade and employment or innovation in U.S. regions as argued by David Autor, David Dorn, and Gordon Hanson (“The China Syndrome: Local Labor Market Effects of Import Competition in the United States,” American Economic Review 103 (6) [October 2013]: pp. 2121 – 68). The authors suggest this may explain the rise of populism and support for protectionist policies, also argued by Trey Malone and Antonios M. Koumpias (“Comparing Small Business Owner and Voter Beliefs Regarding Constraints on Business Growth,” Journal of Entrepreneurship and Public Policy 9 (3) [July 2020], pp. 329 – 341).

In sum, the authors argue in favor of an investor state that promotes innovation by alleviating negative externalities from inherent underinvestment in education and an insurer state that minimizes welfare losses from creative destruction. While the role of foundations committed to financing basic research has been explored, further discussion of proinnovation, fiscal policy tools an investor state may utilize to engage private entities, such as tax credits for charitable donations, may have complemented the authors’ thesis. Recognizing that government action may be serving private interests, the authors examine checks and balances designed to limit the powers of the executive branch and provide examples such as the U.S. civil rights movement that demonstrate how a vigilant and mobilized civil society is necessary for the effective and impartial exercise of power. They deduce that the conditions that foster innovation can be best described as a triangle that “relies on a balance of markets, the state, and civil society” (p. 302). However, no consideration has been given to heterodox economic models of self-governance where markets and civil society alone may successfully fill the vacuum of the state.

The authors conclude that the optimal policy mix to bolster innovation incorporates elements from both the “cutthroat capitalism” of the U.S. and the “cuddly capitalism” observed in Scandinavian countries (p. 314), the “both/and” scenario; a thesis supported by suggestive and causal empirical evidence throughout the book.