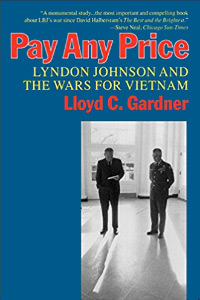 Pay Any Price
Lyndon Johnson and The Wars for Vietnam
Lloyd C. Gardner
Hardcover Paperback
This book review appeared in the Fall 1997 issue of The Independent Review.

In the opening pages of his lengthy history of the Johnson administration’s Vietnam policy, Lloyd Gardner observes that explaining America’s involvement in Vietnam is not a simple matter. To his credit, Gardner endeavors to provide a multidimensional analysis of an extraordinarily complex topic. He faces a difficult task, for at the most basic level he must provide a convincing thesis to explain why an American president persisted in a policy that showed unmistakable signs of failure early on. Indeed, that president refused to retreat even when it became apparent that the Vietnam intervention was undermining his Great Society domestic agenda, supposedly his highest priority, and imperiling his political future.

Gardner’s effort to provide a comprehensive and compelling explanation is only partially successful. The most serious weakness is his emphasis on the economic dimensions of American policy. Readers of Gardner’s previous works will hardly be surprised at the prominence of that factor in Pay Any Price. And there is no denying that economic considerations played a role in the Johnson administration’s Vietnam policy. Gardner argues that LBJ’s formative experiences during the New Deal era led to an unusual attachment to the gospel of government-directed economic development. Johnson believed that generous offers of developmental aid to North Vietnam would persuade Ho Chi Minh to abandon his aggressive strategy to subjugate South Vietnam and instead join in cooperative enterprises that would benefit all of Vietnam. As Gardner puts it, Johnson was confident that it was possible to convince Ho “to accept a dam on the Mekong River instead of a residence in Saigon” (p. 23).

That approach was certainly evident in Johnson’s April 1965 speech at Johns Hopkins University. In that address, which many scholars of the Vietnam War era have dismissed as a crude piece of propaganda, the president proposed a massive TVA-style development project for North Vietnam if Hanoi renounced its efforts to reunify the country by force. There is every reason to believe that the offer was not a cynical ploy but a genuine carrot in a carrot-and-stick strategy. Moreover, Johnson was not the only member of the administration to hope that such rewards might induce Hanoi to adopt a more cooperative policy. Some of the president’s most influential advisers, most notably Walt W. Rostow, also embraced that approach.

Unfortunately, Gardner takes that application of the economic thesis too far. Although economic considerations influenced Washington’s Vietnam policy during the 1960s, they never constituted the dominant factor. Gardner’s thesis is admittedly more sophisticated than the crude Marxist analyses of some of his left-wing colleagues, such as Gabriel Kolko, who seem to believe that the United States fought a decade-long war and suffered more than 58,000 fatalities in an attempt to secure the oil and mineral resources of Southeast Asia. Nevertheless, Gardner attributes too much importance to Johnson’s fascination with development aid as a means of promoting peace and prosperity.

He is on somewhat sounder footing when he notes that the president and his advisers viewed the Vietnam conflict as a challenge to the U.S.-led global political and economic system. Failure by the United States in Vietnam, they feared, could lead to an unraveling of that system. The primary threat was not that the forces of international communism would sweep to victory. The danger was more subtle and complex. An American retreat from Vietnam would undermine the confidence of Washington’s principal political allies and trading partners in the credibility of U.S. commitments else-where in the world. That decline of confidence, in turn, could impel erst-while allies to adopt positions of neutrality toward the U.S.-Soviet struggle, to renationalize their security policies, or both. In other words, Washington’s strategy of maintaining its leadership of the “free world” by suppressing potential rivalries among its many allies and clients, smothering great-power ambitions on the part of such major allies as Germany and Japan, and preserving a (relatively) open international trading and investment climate would be fatally undermined.

According to such reasoning, the Vietnam conflict had economic and political importance far beyond the intrinsic issues at stake in Southeast Asia. That aspect of Gardner’s thesis is not unique. Other historians and international-relations scholars, most recently the World Policy Institute’s Benjamin Schwarz in the pages of the Atlantic Monthly, have made similar cases. Gardner, however, does an especially effective job.

Unfortunately, he again does not adequately appreciate that the political and security dimensions of the “global-order” motivation for the U.S. intervention in Vietnam were at least as important as the economic dimension. At various places in the book he considers those aspects only to pull away before fully assessing the implications. For example, he argues that LBJ’s real credibility gap was not his attempt to deceive the American people about U.S. fortunes in the war. Instead, the gap separated the arguments that he and his advisers used to justify Washington’s policy, which relied heavily on the Munich analogy, from “a reality that did not correspond” to that analogy (p. 536).

Gardner’s implication that Johnson’s sin was one of self-deception more than deception of others is fascinating, although highly debatable. Indeed, the evidence suggests that a good deal of both may have been taking place. The more significant point, though, is that the Munich analogy has always had far more to do with strategic than economic motives. And that applied to the Johnson administration as well as its predecessors—and its successors. Administration officials may have feared the loss of American economic primacy, but they feared even more a repetition of the events of the late 1930s that culminated in a global military catastrophe. The comments of Dean Rusk, McGeorge Bundy, and Walt Rostow, both during the Vietnam War and in subsequent writings, reveal an obsession with the Munich analogy—for security more than economic reasons.

It is unfortunate that Gardner did not devote more attention to the significance of that obsession, for it has more than merely historical interest. The Clinton administration justified the decision to send troops to Bosnia by referring repeatedly to the Munich analogy. Following her appointment as secretary of state, Madeleine Albright stated bluntly that although Vietnam was the defining event for most members of her generation, Munich remained the defining event for her. Given the disastrous consequences that the obsession with “avoiding another Munich” in Vietnam caused for America, the continued dominance of the analogy is reason for grave concern.

Equally disquieting is that the Johnson administration persisted in the Vietnam intervention in the face of mounting evidence that the policy was failing. Several times between the beginning of the Johnson presidency in November 1963 and North Vietnam’s Tet Offensive in February 1968, U.S. policymakers confronted developments that required them to choose retreat or escalation. On each occasion save the last, they chose escalation.

Robert McNamara states in his latest book that he concluded as early as 1964 that victory in Vietnam was not possible—a position most historians previously believed was unique to George Ball among presidential advisers. Although those realizations came surprisingly early (and in McNamara’s case perhaps retroactively repositioned in time with the benefit of selective memory), the entire administration certainly had to have had doubts about the prospects for success by 1966 or 1967. Nevertheless, they slogged on. (Nixon administration officials deserve even harsher criticism. Despite the spectacular failure of their predecessors, they dragged out the U.S. withdrawal for another four agonizing, bloody years.)

Although the global-order rationale was a crucial motive for such futile persistence, there were signs of an additional motive. The intangible but important factors of personal and national pride lurked behind the repeated invocations to stay the course to preserve America’s “credibility.” It is difficult for any person to admit that he blundered on an important matter. It is especially difficult for the leaders of a nation that has rarely experienced failure to make that admission. For LBJ and his advisers to concede that the Vietnam intervention was a mistake would have required them to acknowledge that they had quite needlessly sacrificed the lives of thousands of American soldiers—and been responsible for the equally needless deaths of more than a million Vietnamese. It is not surprising that policymakers might recoil from accepting such a burden of responsibility.

Unfortunately, that tendency did not end with the Vietnam intervention. Richard Holbrooke, the architect of the Dayton accords, now insists that the United States and its NATO allies cannot tolerate failure in Bosnia—even if preventing failure requires both the prolongation and the escalation of the current commitments. Some proponents of NATO’s expansion into Central and Eastern Europe now privately concede the proposal was a poor idea and that they underestimated the depth of Russia’s opposition as well as numerous other problems. Nevertheless, they insist that the alliance has gone too far to turn back now. Reneging on the promise of enlargement, they argue, would deal an irreparable blow to America’s credibility.

That reasoning echoes the “logic” that caused Lyndon Johnson to stubbornly stay the course in Vietnam even at the cost of creating bitter domestic divisions and ultimately undermining his presidency. If the Vietnam tragedy has an enduring lesson, it is that cutting losses promptly is better than persisting in policies once evidence emerges that the initial assumptions were faulty. Policymakers who seek out new military adventures for America in the Balkans and elsewhere need to absorb this lesson. The lives of American military personnel are too important to sacrifice for reasons of national (much less personal) prestige or pride.

Pay Any Price offers some significant insights into the motives and reasoning of President Johnson and his advisers. Yet ultimately it is an unsatisfying analysis of America’s disastrous Vietnam policy. Gardner touches on numerous important issues, but he provides only a modest number of convincing explanations.