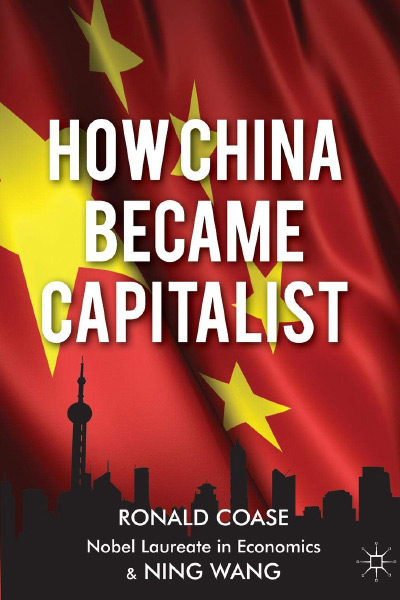 How China Became Capitalist
By Ronald Coase and Ning Wang
Kindle Hardcover Paperback
This book review is a web exclusive for the Winter 2015/16 issue of The Independent Review.

How China Became Capitalist, by the late Nobel Laureate Ronald Coase and Arizona State University’s Ning Wang, tells the story of a nation which has made incredible economic progress in recent decades. China’s gross domestic product (GDP) per person is now twenty times higher than seventy years ago. Coase and Wang argue that the key to this progress has been “capitalism with Chinese characteristics” – which consists of decentralization of economic decisions (from central to local governments), privatization of agricultural land (de-collectivization) and the rise of private entrepreneurship in manufacturing.

The authors confess that their goal is not to offer theoreticalinsights into China’s success. Is this a shortcoming? Perhaps, since any historical evaluation must have theoretical presuppositions. However, the book is a wonderful historical inquiry into the political atmosphere of Mao and post-Mao China, garnished with economic facts such as the creation of special economic zones, fiscal and regulatory reforms, and the import of foreign capital. There’s just a little economic theory, mainly concentrated on how state intervention distorts the structure of incentives in an economy.

How did China actually become capitalist? (If it actually did!) The first chapter presents the story of the Chinese Communist Party and the rise of Mao Zedong. Among the striking details is a description of the situation of a young Mao in the 1920s, an eager reader who left high school for half a year because of a deep-rooted hatred of formal teaching – to spend time “in the provincial library reading a large number of books” (p. 9). At age twenty-four Mao took a job as an assistant librarian at Peking University.

Yet, all this reading did not make Mao a fan of intellectual activity in general. When he rose to power, he marched against many intellectuals who opposed his plans (including Liang Shuming, Chen Yinke, and Hu Feng), at the head of the Anti-Rightist Movement. This movement, committed to Marxist ideals “officially defined [intellectuals’] status as the class enemy of the regime” (p. 10). Even worse were the effects of Mao’s violent collectivization of land and forced industrialization (the Great Leap Forward) – violence that can be measured in the millions of peasants who starved while watching the communist party centralize production.

Coase and Wang invoke Friedrich Hayek’s argument about the localized nature of information in explaining why the misnamed Great Leap Forward (also called the Great Leap Outward) failed. In other words, events would not have ended so tragically if the country had avoided “the breakdown of communication between central and local governments” (p. 17). A complementary explanation of the failure of this grotesque socialist experiment is Ludwig von Mises’s argument about the impossibility of economic calculation in a socialist society. Mises’s construct goes like this: in the absence of private property, there can be no market for factors of production, thus no prices and costs of evaluating allocation alternatives, and in the end no rational allocation of resources. Failure of such a system, warns Mises, is just a matter of time.

Chapter two offers a description of the so-called transition of China towards capitalism. However, as Coase and Wang admit, from an economic point of view there were initially not many changes in post-Mao China, since they continued to enforce central planning with all its faults, even creating a Ten Year Plan (1976-85) after the popular Five Year Plan. As they put it “the whole reform was state directed, investment driven, and concentrated on heavy industry” (p. 30). As in the case of the Soviet Union, little of this was made with domestic capital, which is not a surprise, since nationalization usually means the irrational consumption of capital. “A positive feature of the Leap Outward, and one that would set a lasting precedent, was to borrow money from the West to fund the import of new technology and equipment from the capitalist world” (p. 30). Here (and throughout the book), the argument is made that Chinese socialism had at its core a strong faith in the empiricist dogma of “seeking truth from facts.” Deng Xiaoping, the Chinese Communist Party’s leader in 1980s, was committed to what he called the “no debaterule,” meaning that people, especially the party, should adopt a pragmatic approach to life, politics and public policy. On the false assumption that by “going on the street you’ll find out what it’s all about,” the 1970s and the beginning of 1980s were the years in which Chinese political leaders were sent to the West and other Asian developed economies (Hong Kong, Singapore, Japan, Thailand) to “observe how capitalism operated” (p. 32). But, because they were not armed with a theory to interpret reality, these visits were not a solution, since anything can be concluded in the absence of a theory.

Chapter three offers a description of China’s beginning of reforms towards a market economy. The transition to private farming brings the story of the first private farm officially documented. It started in 1976 in Pengxi County of Sichuan Province, in a small town known also as the “village of beggars,” when the party secretary of the commune decided to “allocate only marginal land to households in two production teams” while keeping collective farming intact elsewhere (p. 47). This secret decision proved to be very effective since “the output of the marginal but privately cultivated land was three times higher than that of the collectively cultivated fertile land” (p. 47). Although private farming did not have good reputation because it could “erode socialism,” it spread to Anhui, Guizhou, Inner Mongolia and Henan. The chapter also examines the special economic zone (SEZ) experiments. An SEZ is a regular county or province selected by the Chinese government to apply basic principles of a free economy: property rights, division of labor, and private production. The inevitable happened, SEZs flourished, for example, in Shenzhen which was “transformed from a fishing town of less than 30,000 people to the third largest and the fastest growing city in China with more than 14 million residents” (p. 63).

The decentralization process started under Deng Xiaoping allowed the existence of private enterprises, and township and village enterprises, which functioned in parallel with state owned enterprises(SOEs). With these private enterprises China experienced a parallel price system, which was not regulated by the state. In a nutshell, decentralization unleased efficiency, rational allocation, and competition. During the 1980s a dual track system of prices functioned in China, with some of the prices being decreed by the state, and others freely fluctuating within the newly-created markets. However, this created a dilemma, since efficient economic activity steadily put pressure on those inefficient areas of the economy, managed by the state. Interestingly, popular opinion did not actually see this transition as real, but rather a means to strengthen socialism. As a matter of fact, the social perspective on the transition embodied the idea that markets and the private economy (often referred to in the book as the “non-state sector”) were only a supplement, to help enforce the main objectives of a socialist society. As the authors put it “the goal of reforms had always been to strengthen socialism” (p. 74).

Chapter five shows the progress of the private Chinese economy in the 1980s and 1990s. After the success of Shenzhen as an SEZ in the 1980s, came the Pudong zone based in Shanghai, the creation of a stock exchange and a set of price and fiscal reforms in 1990s. These reforms consisted in abolishing many price controls and unifying the fiscal system, which gave strong incentives to private entrepreneurs. However, the privatization process did not have a “social face” until the 1990s. Privatization was seen as the last resort because the “strong and persistent preference for state ownership” (rooted in the Confucian tradition, speculate the authors) and “the political and cultural hostility toward privatization was strong” (p. 130). This kept alive many problems in the economy since “economic resources open to everyone belong to no one” (p. 131).

The book’s conclusion notes that, ironically, because education is still a task of the central government, “Marxism has been and still is, taught to students from primary school as a scientific theory and the final truth on human history and social evolution” (p. 196), despite the undeniable fact that the “Chinese state has steadily withdrawn itself from the economy over the past few decades of reform” (p. 175). On the other hand, a recent Fortune listing shows that among the ten largest Chinese companies only one is private. Another problem of the present Chinese economy is its Keynesian-oriented economic policy. Inflationary monetary policy since 2008 has flooded state-owned enterprises and local governments with more than 4 trillion yuan (about $586 billion) in credit. Where should privately-owned businesses direct their capital when they must compete with the state sector which has “grown on cheap credit at the expense of the private sector” (p. 181)?!

Coase and Wang’s book is recommended reading for students of international economics and politics. It is first and foremost a concise history of Chinese economic policies. Nevertheless, its goal of a non-theoretical approach is only wishful thinking and reader is left asking many questions.