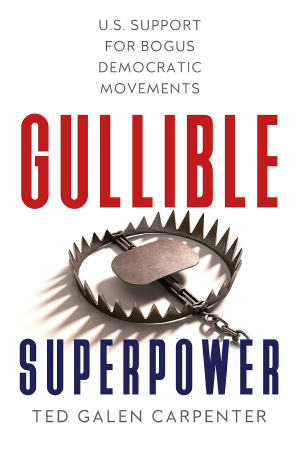 Gullible Superpower
U.S. Support for Bogus Foreign Democratic Movements
By Ted Galen Carpenter
Kindle Hardcover
This book review is a web exclusive for the Spring 2019 issue of The Independent Review.

In 1984, while accepting the Republican presidential nomination, Ronald Reagan stated that, “Four years ago we raised a banner of bold colors—no pale pastels. We proclaimed a dream of an America that would be ‘a shining city on a hill.’” Reagan wasn’t the first, or last, U.S. politician to refer to America in these terms. The “city upon a shining hill” rhetoric is intended to communicate the idea of American exceptionalism which holds that American values are unique, and that the American government has a crucial role to play in shaping the global order. Among other things, this involves a proactive foreign policy whereby the U.S. government uses its discretionary power to intervene in other societies to spread U.S. values. But as Ted Galen Carpenter’s Gullible Superpowers shows, in many cases these interventions have been nothing more than a fool’s errand. Rather than spread values of individual liberty, self-determination, and democracy, Carpenter shows that the U.S. government has repeatedly supported movements committed to just the opposite.

Carpenter traces the systematic rise of U.S. government support for the illiberal movements to the “Reagan Doctrine” which included a commitment to provide aid and support to anti-Soviet groups. The problem, according to Carpenter, was that this doctrine treated a diverse and heterogenous set of political movements as if they were uniformly committed to advancing democracy in line with American values. The Reagan Doctrine treated the problem as a purely technocratic one. Well-intentioned American policymakers could identify clear allies and provide them with the resources necessary to effectively promote American democratic values.

The assumptions underpinning this doctrine suffered from a number of shortcomings. First, the realities across societies—both historical and contemporaneous experiences—vary greatly. Movements fighting in the name of democracy are not homogenous, but instead hold a variety of different values and goals, some of which may align with those of U.S. leaders and others which may not. Identifying groups to support is no easy task, as today’s “freedom fighter” can easily become tomorrow’s terrorist. Moreover, in many cases the societies within which these movements are embedded have little to no experience with democracy, at least not in the Western sense of the term. This is problematic because an implicit assumption of the Reagan Doctrine was that movements consisting of people who had no experience with Western values would nonetheless promote those values. As Carpenter puts it, “the so-called freedom fighters were not advocates of freedom and democracy, even given generous definitions of those concepts. Anti-Soviet and anti-communist insurgent groups were a diverse collection of secular authoritarians, religious zealots, and genocidal psychopaths, with a sprinkling of genuine, Western-style democrats thrown in” (p. 9). The Reagan Doctrine, Carpenter argues, continued in the wake of the Cold War as subsequent, bi-partisan administrations funded a variety of movements around the globe in the name of promoting liberty and democracy.

Carpenter illustrates the perverse consequences of the Reagan Doctrine through a series of detailed case studies of U.S. government support for democratic movements across time and across geopolitical contexts. While the specifics of each case vary, the general story is the same—members of the U.S. government provided aid and support to movements whose actions did not align with their rhetorical commitment to democracy and freedom. In fact, in many instances the activities of these movements undermined the very values they purported to uphold and advance.

If America wants to maintain its values and cares about sharing those values with others, Carpenter argues, then it must adopt a restrained foreign policy. This involves a genuine humility which appreciates the realities and constraints facing the U.S. government. The political elite lack the knowledge to shape and design other societies, which are characterized by an array of overlapping, complex systems, in the desired manner. And the, often perverse, political incentives at work mean that even the best-intentioned, most well-designed plans are likely to generate a range of undesirable consequences which will often undermine the stated goals of the policies undertaken.

Gullible Superpower highlights an important, yet often overlooked consequence of a proactive, militaristic foreign policy. Like domestic government policies, a government’s foreign policies create rents that otherwise would not exist. Acting like any other interest groups, foreign movements are often in the best position to capture these rents. Their lobbying efforts include investing in signaling their supposed commitment to “democracy” to political gatekeepers in the U.S. government. Where successful, these movements concentrate the benefits of the U.S. government’s foreign policy on their members while dispersing the costs on others. These “others” include American taxpayers, who incur the monetary costs of foreign support, and regional and global actors who suffer reductions in welfare due to the American government’s support for illiberal, and often brutal, movements. Yet another cost is the erosion of the very values that U.S. politicians claim to support. By actively supporting movements that are the antithesis of liberal values, U.S. politicians become the very thing they seek to combat. Among other things this frames how others around the globe view America and the rhetoric its government so confidently broadcasts. Instead of seeing the United States as a “city upon a shining hill,” they instead see the U.S. government as a hypocritical empire intervening in other societies to support illiberal movements in the pursuit of narrow interests.

One question that arises is whether U.S. policymakers, in their repeated support of illiberal movements, are indeed gullible or whether they, instead, act strategically. Carpenter allows for both possibilities. He recognizes that U.S. politicians often act strategically by emphasizing “their clients’ alleged democratic credentials to soothe an American public that might balk at embracing questionable ... movements” (p. 243). At the same time, he notes that “one cannot underestimate even the capacity of jaded politicians to engage in self-delusion” and believe that they are supporting genuinely democratic movements (p. 244). Ultimately, the answer to this question doesn’t matter. Irrespective of whether U.S. politicians are strategic or gullible, Carpenter demonstrates that they have systematically supported movements that do nothing to advance American values or to protect American citizens.

The broader consequences are troublesome. If U.S. politicians are strategic actors, then they have repeatedly lied and manipulated the American public to achieve their short-term goals by knowingly supporting illiberal movements. If, instead, U.S. politicians are gullible, then they lack the social intelligence to avoid being repeatedly manipulated and tricked by the leaders of these movements. Given that those in the U.S. government control the most powerful military apparatus in the history of mankind, having strategic liars or gullible fools wielding this level of power poses a significant threat to human wellbeing and necessitates a serious reconsideration of the scale and scope of the American empire.