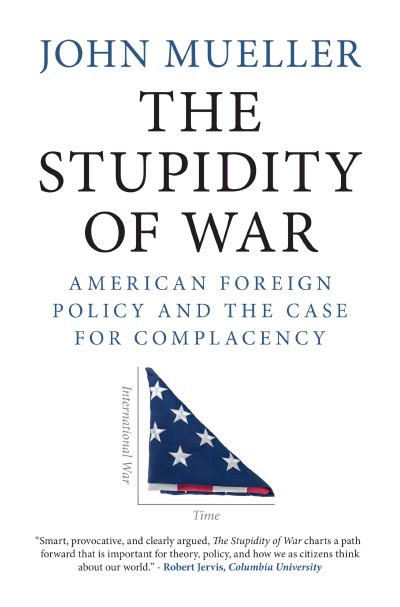 The Stupidity of War
American Foreign Policy and the Case for Complacency
By John Mueller
Kindle Hardcover
This book review is a web exclusive for the Winter 2021/22 issue of The Independent Review.

In Paths of Glory: A New Way with War (Friends’ Book Centre, London, 1937), economist and conflict scholar Kenneth Boulding argued that advances in technology had changed the nature of war. The result, he argued, was “that war had become much more costly, much more horrible, and much less noble than it was before” and that “a major war in these days is so costly that what is left after it is all over is probably not worth fighting about” (p. 4). The onset of World War II two years later would seem to suggest that Boulding was wrong. But as John Mueller’s excellent book, The Stupidity of War, clarifies, perhaps Boulding was on to something after all.

Mueller argues that since 1945, there has been entrenchment and expansion in international peace. War has always been stupid because of the significant costs, he argues, but the foolishness of war became especially evident following the two world wars. The result is the rise of an international aversion to conflict. One of Mueller’s central contributions is to argue that the international culture of peace is an independent variable that has caused the widespread antipathy to war. Mueller’s contribution stands in contrast to many treatments of peace that see it as dependent on (i.e., caused by) some other independent variable—e.g., international government organizations, a global hegemon, international trade. In Mueller’s telling, the commitment to peace is what creates the conditions necessary for things like trade and international rules to emerge, which then further reinforce peace.

Mueller is careful to note that his argument is not that war never occurs, but rather that there is an aversion to warlike behavior because of the associated costs both in lives and treasure, but also in terms of violating norms of peace. These norms emerged through changing attitudes toward war in the twentieth century due to the experiences with conflict. This shift was not the result of some top-down design; it did not require a world government, change in the nature of humans, or the global adoption of a uniform political or economic system.

The bulk of the book is a survey of foreign policy in the post-World War II period with a particular focus on the United States. Three overarching and related themes emerge. The first is the value of complacency and appeasement. On the face of it, this seems counterintuitive. Policymakers and international relations experts often speak of the need for the U.S. government to proactively counter threats and maintain order through the use or threat of military force. Mueller argues that embracing complacency is often superior to the military option. In the case of Iraq, for instance, he argues that the regime of Saddam Hussein could have been easily contained while avoiding a costly war. He does note that complete complacency is not always appropriate but does not offer a clear guide as to where to draw the line. Similarly, appeasement, he argues, has been discounted as a technique due to the experience with Hitler in 1938. But Mueller contends that this was an outlier as “it seems likely that peaceful dealmaking—appeasement—would have worked with any German other than Hitler” (p. 17). Just like we rely on complacency and appeasement in our daily lives to navigate conflicts and tensions, so too should we elevate these methods in international relations.

A second theme is that the fear of numerous “existential threats” is overblown. There is a tendency for domestic policymakers to engage in systematic threat inflation—an exaggeration of the actual threat to the security of Americans. There are certainly instances of threats and uncertainty where concern about worst-case scenarios is appropriate. However, Mueller argues that alarmism tends to dominate policy discourse surrounding national security, leading to an overestimation of the true threats to security. For example, following the September 11 attacks, he notes that it was reasonable to be fearful of the possibility of subsequent attacks, but there was a systematic adoption of worst-case thinking such that alternative scenarios and strategies—such as complacency and appeasement—were excluded from the policy discussion from the start. Mueller’s analysis of post-World War II foreign policy concludes that there has never been a genuine threat to the security of America requiring a military response. There have certainly been challenges, but potential threats either lacked the ability to perpetuate harm, collapsed, or did not exist in the first place.

This leads to the third theme. Given the potential for strategies of complacency and appeasement, combined with the lack of genuine security challenges, Mueller argues that America’s large standing army is unnecessary. He argues that a large military is not only costly in monetary terms, but also in that it incentivizes leaders to rely on the military, as compared to alternatives such as diplomacy, for engaging in international relations. The overreliance on the military not only often results in the failure to achieve immediate goals, but also contributes to global disorder rather than international order as proponents of military primacy suggest. Drawing on the experiences in Afghanistan and Iraq, Mueller concludes that “insofar as the United States has been indispensable in the twenty-first century, it has been in dispensing of war and disorder, not peace and order” (p. 221).

Mueller does not offer details into what the ideal structure and size of the U.S. military should look like. He also doesn’t discuss in detail how significant cuts to, and restructuring of, the status quo could occur given the political dynamics inherent in the industrial organization of state-provided defense. This matters not just for the size of the military, but also for the tendency to engage in threat inflation—after all, government agencies thrive by creating demand for their services and the military is no different and, if anything, likely to be worse in this regard.

Mueller concludes by asking whether international anarchy is a desirable condition. Kenneth Waltz (Man, the State and War, New York: Columbia University Press, 1959; and Theory of International Politics, Reading, Mass.: Addison-Wesley Publishing Co., 1979) argued that the international system exists in a state of anarchy because no overarching, sovereign body governs interactions between states. Realizing this, states are incentivized to prepare for war. But Mueller notes that this insight is only useful when violence is an accepted means of resolving conflicts. Where an aversion to war exists, as it does now, anarchy might indeed be desirable as a source of order. In such a system, efforts to create order may instead do the opposite by undermining the culture of peace. Instances of state violence, which will certainly occur, do not necessarily undermine the antipathy to conflict, just like “the occasional misdirected drunk” does not change the “norm about everybody driving on the same side of the road” (Mueller, p. 223).

In Paths of Glory, Kenneth Boulding concluded that “There is only one way in which we can break this appalling cycle of misery and destruction: that is to renounce war altogether, and to work out an entirely different method of defense, based on the principle of peace instead of on the principle of war” (p. 11). What was needed, Boulding argued, was a steadfast commitment to nonviolent means to resolve conflict. The great value of The Stupidity of War is in demonstrating that genuine substitutes to violence for navigating conflicts is not just a vision of a possible future, but rather, is already a reality.