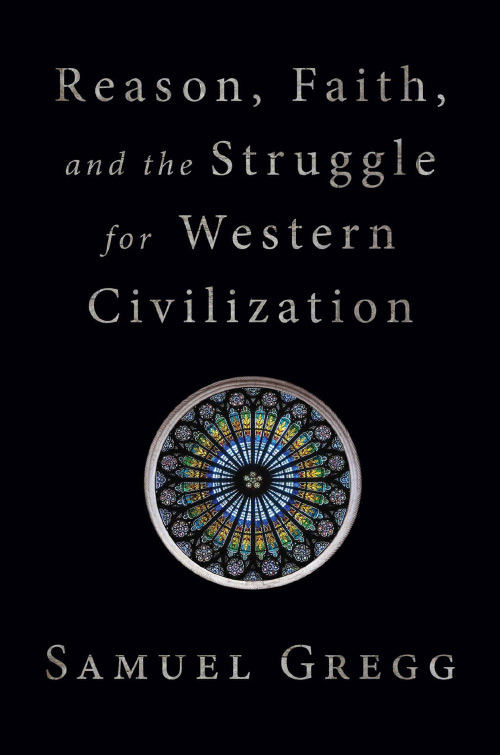 Ongoing conflict with and within the Middle East has spawned a significant literature regarding the “clash of civilizations” between Western liberal democracies and Islamic nations in particular (see Samuel P.Huntington, The Clash of Civilizations and the Remaking of World Order [New York: Simon and Schuster, 1996]). The war on terror, combined with mass emigration from theMiddle East to Europe, has added urgency to this concern. Does ordered liberty require a deep, cultural adherence to institutions and practices with historical roots not to be found in Islamic countries? Or is ordered liberty the product of a specific setof beliefs to which any rational person can and, given the chance, would subscribe?

Samuel Gregg sides with those who see ordered liberty as fundamentally a matter of right thinking. But right thinking, in his view, is encouraged or discouraged depending on the nature of one’s intellectual tradition. Reason, Faith, and the Struggle for Western Civilization is an attempt to lay out for a popular audience the reasons why Western civilization has been uniquely favorable to human dignity and freedom. Unfortunately, according to Gregg, peoples in the West have forgotten or even come to despise the tradition of rational thought on which ordered liberty relies, thus leaving it and our civilization as a whole vulnerable to decline and even conquest at the hands of those who reject the reasonableness of human dignity and ordered liberty. For Gregg, our misunderstanding of the relationship between reason and faith stands in the way of right thinking as that misunderstanding spawns hostility toward rational faith, adherence to false faiths, and a failure to confront religious irrationality.

According to Gregg, Western civilization is fundamentally ordered by rational inquiry into the good. The reason for this? Western religions within the Judeo-Christian tradition view God as logos, which is to say divine reason. And this vision has shaped Western culture, defined as “that which is adorned, cultivated, protected, and worshiped” (p. 8). Thus, if “we want to understand what is central to a civilization’s culture, we must ask what it seeks to uphold. What does it revere? What ‘cult’ is at its heart?” (p. 8). In the West, the answer is “reasoned inquiry in search of truth” (p. 9).

All belief systems make truth claims. Jewish and Christian truth claims emphasize each person’s capacity to use practical reason to discern right and wrong, good and evil. From this capacity, Western civilization has developed limited government respectful of the rational persons it governs. The problem, for Gregg, is that today’s dominant belief systems—including those in the West—lack rational bases; they do not encourage their adherents to reason through to what is true and right.

According to Gregg, there are three types of contemporary alternatives to Western civilization. The first two are internal (and damaging) to the West: scientism and the sentimentalized “religion of humanity.” The third and most well-known alternative, which is foreign to and openly hostile to the West, is Islam. Each of these competitors against the historical mainstream of Western civilization undermines liberty. The common element among them, somewhat ironically, is faith.

By “scientism,” Gregg means the various forms of socialist ideology deriving from Marxism that seek to apply the scientific method to social issues. In all its forms, scientism is rooted in an excessive faith in what is essentially a methodology of trial and error. Taking a mode of investigation for the whole of man’s reason, scientism brings with it a determinism that denies human dignity and free will. It also fosters a Promethean delusion that those with the right knowledge may change the world and, most important, human nature. Misplaced scientism produces totalitarianism as its adherents seek to make the person fit into irrational and essentially religious dreams of a utopian future.

Although the religion of humanity may be traced to the overtly religious sentimentalism of Auguste Comte, Gregg emphasizes its importance in shaping the thought and work of seemingly more secular figures such as John Stuart Mill. Here, too, dignity and free will are denied in favor of mechanisms employed by the state. The difference between the religion of humanity and scientism comes down to the former’s irrational insistence that love for one’s fellow man requires state control over his life. Such control actually undermines men’s capacity to lead good lives because it denies the existence of objective truths about human nature. The result is an insistence on massive government programs aimed at “helping” individual persons by taking away their autonomy in the name of a kinder, gentler society and personal character. Underlying this argument is Gregg’s classical liberalism, according to which rational engagement with markets provides the discipline necessary for proper character development.

Finally, Gregg criticizes Islam on two counts. First, he notes the extent to which revelation takes precedence over reason within Islamic theology. Second, he emphasizes the extent to which Islam demands that its revelatory injunctions be transformed specifically and directly into law rather than merely into social practice, which may or may not influence law and politics. Combined, he argues, these elements make Islam particularly hostile to Western civilization and to the kind of public reason he deems essential to the maintenance of ordered liberty. Those who value Western civilization must put their house and mind in order, or it will fall before Islam’s irrational but powerful claim to the divine right of conquest.

Overall, Gregg’s critique is pointed and powerful. His positive argument is less successful. It is understandable that in his brief defense of Western civilization he should treat Judaism and Christianity in somewhat utilitarian terms—as valuable for what they produce for society rather than in terms of any transcendent or other-worldly value. But a book about the connections among limited government, natural rights, and the particular institutions, beliefs, and practices developed within and from Judaism and Christianity should take those religions seriously on their own terms. Gregg does not. He goes beyond rejection of sentimentality to strip Christianity in particular down to its most rationalistic elements, making one wonder what is so dignified about rational calculators of the good—or why God would have bothered to create such beings in the first place. In brief, a straightforward Deist or Stoic account of the rational bases of liberty would be more consistent and convincing than this attempt to “rationalize” the Jewish and Christian religions.

Gregg’s decision to place “reason” before “faith” in his title is important here. In contrast with the Catholic tradition to which Gregg in many ways adheres, he subsumes faith within reason. This approach is somewhat ironic given the attention he gives to Pope Benedict XVI’s Regensberg Address (September 12, 2006), aimed at showing that contemporaries are wrong to define reason to include only that which is empirically falsifiable. Gregg fails to engage with the many ways of knowing that are important not just to religious persons but to all persons. Not quite dismissing Benedict’s concern that rationalism risks “reducing Christian faith to metaphysics at the cost of knowing and giving love” (qtd. on p. 110), Gregg merely nods to the problem that “excessive rationalism” will potentially turn faith into irrational fideism.

Mere acceptance on faith may pose as much of a problem for the West as Gregg avers. But it remains unclear what counts as “reason” for Gregg beyond logical deduction from “a series of intellectual propositions” (p. 111). Here it is significant that Gregg chooses to ignore the papal encyclical Veritatis splendor by John Paul II (August 6, 1996; Washington, D.C.: USCCB Publishing, 1993). This encyclical begins by emphasizing man’s “yearning for absolute truth” and “thirst to attain full knowledge of it” (p. i). That is, John Paul II posits an internal compass that is not a matter of selfgenerated reason but rather a response to something outside itself and a desire to be one with it. This understanding of the pull of ultimate truth, deeply embedded in the natural-law tradition, rests on a view of human understanding far wider than Gregg’s.

Perhaps the most relevant example here is the moral imagination—that “process by which a self ‘creates’ metaphor from images recorded by the senses and stored in memory, which are then occupied to find and suppose moral correspondences in experience. An intuitive ability to perceive ethical truths and abiding law in the midst of chaotic experience” (Jonathan Jones, “Defining ‘Moral Imagination,’” First Things, July 1, 2009). Moral imagination has long been recognized as an important mode of reasoning, developed in our culture through an understanding of great literature, in which examples of right and wrong conduct are made luminous.

For Gregg, a person’s Christian or Jewish faith seems largely irrelevant to the person’s overall character, his or her soul. What, then, has our civilization given us as guideposts to a good life? Here Gregg summarizes John Finnis’s list of theses deduced from “that persistent and particular pattern of human thought and action that has been transmitted across time and has made the West what it is” (p. 135). This list of civilizational themes—creation, freedom, justice, and faith—is in a circular argument said to cohere without need of any hierarchical ordering; it is highly reminiscent of Finnis’s other list of presumptive good things, his “Basic Goods” (Natural Law and Natural Rights [Oxford: Oxford University Press, 1980]). It builds on one element of Thomistic understandings of natural law—the existence of certain self-evident truths (e.g., the law of noncontradiction)—a rationalist interpretation of history and human experience. As such, it eschews the integrative tradition central to the West in favor of a reductionist epistemology that says, in essence, that reason can be made broad enough to encompass certain notions regarding the divine.

Yet religion is more than reason, just as it is more than faith. The root of the term religion means “to bind.” And thismeaning indicates the sense in which culture truly comes from the cult—not just as a matter of etymology but as a matter of human experience. Judaism and Christianity do more than posit a rational God. They generate customs and practices, the content of common life, from which come our understanding of rights and our ability to make them real. For Gregg, meanwhile, religion is merely “a set of beliefs about the divine that [are] somewhat removed from culture, politics, and economic life” (p. 34). This artificial separation of faith detracts from an argument essentially concerned with the necessity of traditions deeply rooted in specific religions for the survival of ordered liberty.