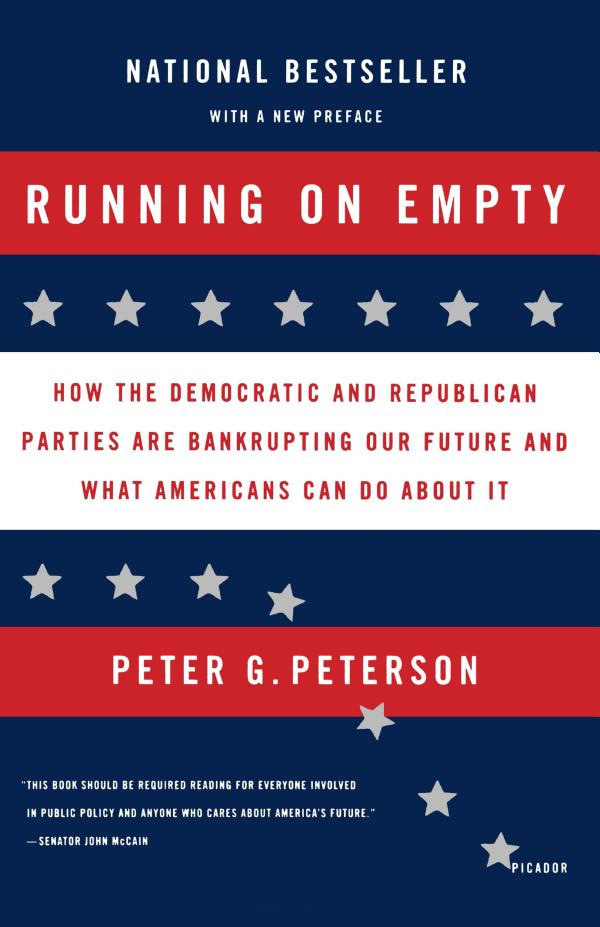 Running on Empty
How the Democratic and Republican Parties Are Bankrupting Our Future and What Americans Can Do about It
By Peter G. Peterson
Kindle Hardcover Paperback
This book review appeared in the Spring 2005 issue of The Independent Review.

Hard evidence that the United States is technically bankrupt—that is, that the present value of its liabilities (upward of $74 trillion when discounted and summed over an infinite horizon) substantially exceeds the present net worth of the entire U.S. economy (approximately $42 trillion when similarly discounted and summed)—ought to concentrate the mind wonderfully. Why should “We the People” be concerned by liberal and conservative politicians alike committing to even more spending at this juncture? Where precisely lies the harm in piling on the promises when all the taxation, fees, predatory extractions, borrowing, inflation, and repudiation of the public debt will not pay for the existing stock of them? Necessity eventually will compel politicians to choose between providing the essential services of government and delivering on the past’s confectionary promises.

Today’s long-term spending commitments are tokens—placeholders that give future generations standing to argue for wealth transfers. The Supreme Court determined in Flemming v. Nestor (363 U.S. 603 [1960]) that entitlements such as Social Security are not tantamount to contractual relationships between citizens and the state to be defended constitutionally against unilateral abrogation. Rather, as Justice Hugo Black dissentingly paraphrased the majority’s opinion, the state “is merely giving [beneficiaries] something for nothing and can stop doing so when it pleases” (at 623). However the Court’s decision is read, today’s entitlement commitments are not binding on future generations; believing otherwise encourages false inferences about our posterity’s welfare.

Imagining that benevolent politicians can be persuaded to limit voluntarily the accretion of social promises, whose consequences will not be faced nominally for years, is a noble but inherently fatuous exercise. Politicians favor back-loaded taxing and spending agendas precisely because they garner votes today, but their fiscal ramifications fall due on another politician’s watch. Any politician or party that contemplates legislative restraint for moral or fiscal reasons knows full well that others, whose jobs are less secure, will happily make those promises in exchange for campaign contributions and in-kind electoral support. Ask once again, “Where is the harm in this pattern of conduct?” Hard fiscal choices in the future must perforce be made in the future when, fortunately, needs and resources can be assessed accurately. The present generation can best provide for its posterity by bequeathing to it a robust economy. Proposing to safeguard the welfare of future generations by limiting the trade-offs they face tends toward practical nonsense.

Nevertheless, arguing for political restraint is the gravamen of Peter Peterson’s latest book, Running on Empty. Peterson, a Republican, brings serious professional credentials to this work: he is a former secretary of commerce and chairman of the New York Federal Reserve Bank, a distinguished economics advisor and business leader, and a founder of the Concord Coalition, an organization that advocates fiscal prudence and balanced budgets. His book presents the usual litany of statistics detailing the state of the U.S. economy in general and that of Social Security and Medicare in particular; it presents figures supporting the claim of national bankruptcy on page 33. Peterson echoes familiar cries of impending fiscal crisis and social doom, and he argues that long-term fiscal prudence is our obligation to future generations. He quotes Abraham Lincoln for the proposition that “[f]ew can be induced to labor excessively for posterity, and none will do it enthusiastically. Posterity has done nothing for us; and, theorize on it as we may, practically we shall do very little for it unless we are made to think we are, at the same time, doing something for ourselves” (qtd. on p. 188). To this end, Peterson recommends that we personalize long-term fiscal issues by thinking and acting with an eye toward the welfare of our grandchildren and of their grandchildren. The book concludes with specific recommendations for reforming Social Security, Medicare, and the budget process, and for alleviating today’s extreme political partisanship.

Proposals for reforming Social Security and Medicare follow along familiar lines. Peterson recommends structural changes to limit the real per capita growth of these entitlements “in a way that is gradual, humane, and fair” (p. 195). He also proposes to “to change people’s behavior in positive directions—for example, to get them to plan ahead, to save more, and to live healthier lives” (p. 195). He explains why these large and rapidly growing entitlements cannot be sustained in their present form simply by growing the economy, increasing taxes, and reducing fraud, theft, and waste. And he touches on the twin evils of extracting “contributions” in the name of social benefits that plainly cannot be delivered and of distorting rational saving behavior by encouraging the false belief that the existing stock of promises will be honored and perhaps even expanded in perpetuity. There is no arguing with the merits of these desiderata except to note that they will require an unlikely shift in political incentives.

Peterson recognizes that hope for modifying political incentives hinges on changing the selfish attitudes of voters, whose pursuit of narrow self-interest through the political process (rent seeking) has engendered “extreme and vitriolic partisanship” (p. 218). Less compelling is his nod to Robert Putnam’s Bowling Alone thesis when attributing partisanship to “weakening civic bonds that fail to translate sound personal values into sound public policies” (p. 189). He attaches little weight to the theory and evidence of collective action, which teach that even benevolent voters are disinclined to sacrifice private utility today in order to benefit anonymous strangers tomorrow, and he downplays the corresponding incentives that animate political decision making in the absence of binding fiscal constraints.

His proposal for reforming the budget process is similarly myopic. Pork-barrel politics is patently disgraceful, yet reform of the budget process has been proved to be impossible. He refutes his own reform proposal by recounting the Gramm-Rudman-Hollings budget-control scheme and the Budget Enforcement Act. Both arrangements failed: the first was abandoned when budget deficits dictated painful spending cuts; the second was forgotten when surpluses made the temptation of new spending irresistible. He correctly concludes that “[t]he reality is unavoidable: whatever Congress decides to do, it can just as easily undo” (p. 215). Absent an infinite regress of metarules for enforcing lower-level enforcement rules, which would unconstitutionally restrict Congress’s ability to exercise “flexibility and boldness in adjustment to ever-changing conditions” (363 U.S. 603, at 610), managed reform of the budget process will remain chimerical. Only the hard spending choices imposed by contemporaneous fiscal necessity can produce meaningful change, a conclusion underscored by comments such as “deficits are just numbers on paper” and “Reagan proved deficits don’t matter,” statements attributed to President George W. Bush and Vice President Richard Cheney, respectively, and highlighted on the book’s jacket and repeated in its text.

Peterson places great weight on the present generation’s supposed obligations to posterity, as if today’s social promises were binding on future generations and as if it were possible to know today what measures are optimal for them. Neither notion is valid. The best thing the present generation, or any generation, can do for its posterity is to bequeath a robust economy that allows future generations to choose their destinies from an array of attractive alternatives. To this end, voters must insist that contemporaneous public expenditures for capital projects, transfer programs, and the running cost of government create at least enough public wealth to cover the “ shadow cost” of public funds, or about $1.30 worth of value for each dollar spent—the 30 percent premium being required to compensate for the excess burden and other costs of taxation. This requirement implies the need to discipline current spending, something that has not been accomplished on a lasting basis in recent times. The means for achieving control over current spending is not obvious in an age of constitutionally unconstrained government and in the absence of binding fiscal constraints; if it were obvious, then it would have been discovered and perhaps tried before now. Even so, controlling present spending is a more tractable and worthwhile challenge than controlling nominal future spending.

In sum, the book’s proposals flow from two faulty premises. The first is that political behavior can be changed meaningfully and permanently in the absence of absolute necessity. This premise, if true, has yet to be demonstrated. The second premise, as Peterson states it, is that “unless you reduce the long-term spending burden, you cannot cut taxes in any lasting way, but can only shift the burden of taxes from the present to the future” (p. 161, italics omitted). With the exception of spending on the national debt, future generations remain perfectly free to manage their fiscal affairs as their wants and means dictate. Again, our obligation to posterity is to bequeath a robust economy. This objective can be accomplished only by controlling, in a rational manner, our spending on present public consumption. When we have done so, our obligation to posterity will have been satisfied.