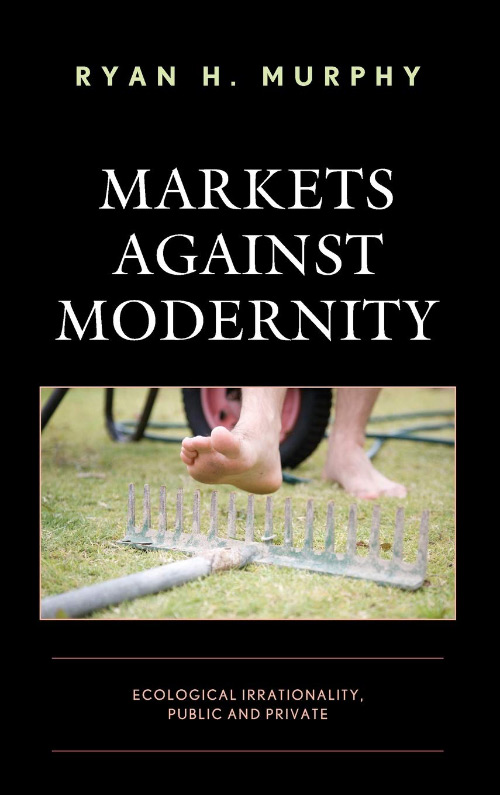 Markets against Modernity
Ecological Irrationality, Public, and Private
Ryan H. Murphy
Kindle Hardcover
This book review is a web exclusive for the Fall 2020 issue of The Independent Review.

The title represents the themes of this book succinctly. Ryan Murphy explores the implications of the division of labor and the division of knowledge in a society advanced enough to both possess incredibly complex institutions and not understand the rules that govern them well. The result is a book that is an applied exercise in the Hayekian knowledge problem. Specialization fractures knowledge among individuals and groups, and no one can possess the knowledge to act independently. This is what Murphy means by modernity, what might be more technically postmodern. Murphy rejects prior economic descriptions, like rational ignorance, because they don’t hold up to the critiques by behavioral psychologists that error is systematic (p. 19). This is where the subtitle comes in. This work shows, with contemporary examples, that errors are not the result of ignorance, but instead of a rejection of the institution, the market, that historically aggregated knowledge and made unprecedented wealth possible. Increasingly, “modern” conventional wisdom pushes back on expert or consensus views.

In this book, Murphy scrutinizes popular trends in conventional wisdom by engaging in a systematic examination of rationality between two extremes, Homo economicus, who is “hyperrational” and predicts optimal strategies, and Homo behavioralis, whose description is accommodating to every variation imaginable and therefore “makes no predictions” (pp. 17–18). The book stops short of offering systematic prescriptions, and this is consistent with a defense of the status quo. There is a call for more analytical focus in education (p. 163) and for some increased institutional control of rent seeking (p. 166). More pointedly, Murphy encourages the researchers and policy analysists reading his book to be less romantic about “bonding social capital” beyond a minimal level, as this decrease coincides with the rise of the modern world (p. 166).

Chapter 1 establishes some themes in the book, Murphy puts his target clearly in view by giving two examples of do-it-yourself activities. Using the twin argumentative burdens, autarky makes us poor and trade is good, the reader is expected to agree about what is at stake in our modern debate, the ability of the market to deliver historically unprecedented wealth. The role of the economist, therefore, is to make arguments about the economic way of thinking that are effective at preserving this institution.

Chapter 2 gives a motivated reading of the field of public choice summarized under the title, “Extreme voter stupidity” (p. 15). For Murphy’s part, public choice deals with reasons why policy decisions are insufficiently rational, why bad policies are popular, and how these bad policies persist. Consistent with this reading, the arc of the public-choice narrative rises from James Buchanan and ends with Bryan Caplan. This gives an antecedent for Murphy’s term “ecological rationality,” which also owes a debt to Vernon L. Smith’s use of the term (“Constructivist and Ecological Rationality in Economics,” The American Economic Review 93, no. 3 [June 2003]: 465–508).

Chapter 3 discusses the choice to be irrational and expands this beyond the policy discussion. The chapter presents the debate surrounding Bryan Caplan’s publication of The Myth of the Rational Voter: Why Democracies Choose Bad Policies (Princeton, N.J.: Princeton University Press, 2008). Murphy explains how one can choose irrationality, ecologically, even if there is not a deliberate rational choice to hold irrational beliefs. His contribution to the debate is made clear by linking the example of choice between almond extract used in Steven Pinker’s The Blank Slate: The Modern Denial of Human Nature (New York: Penguin, 2002) as a more general expression of the choice between rival heuristics. A dichotomy between natural and artificial in this context demonstrates the irrationality of a heuristic privileging natural products (which contain trace amounts of arsenic) to those that are safer (p. 32). If much of private choice occurs between competing heuristics, which are often false dichotomies, then some amount of error is guaranteed. This error remains because it is our sociability that makes us irrational, not our rational choice to hold irrational beliefs. This is a significant tweak to Caplan’s description.

In chapter 4, he extends this insight into irrationality by showing that Caplan’s narrow application of irrationality to public behavior is only a specific case of a general rule. The problems of ecological rationality apply to private behavior as well. This is consistent with the behavioral literature as well.

Chapter 5 makes a useful distinction between the effects of institutions on choice and the demand for irrationality. In the first case, institutions change relative costs and are therefore an issue of supply. In the second case, things like status seeking influence demand (p. 68). Murphy misses an opportunity here to tie his discussion into a larger debate on “social proof” (see, for example, Cristina Bicchieri and Eugen Dimant, “Nudging with Care: The Risks and Benefits of Social Information,” Public Choice, forthcoming). This connection would give him a valuable tie to the current literature discussing a vast array of seemingly irrational commitments in the developing world and the experience agencies and researchers have with trying to change them from the outside. This comparison might also provide some insight into other sources of resistance toward modernization.

Chapter 6 details four potential institutional changes addressing the impact of ecological irrationality on society: Epistocracy, Anarcho-Capitalism, New Autocracy, and Futarchy. Autocracy is rejected on theoretical and empirical grounds. It potentially offers an opportunity for a rational dictator to improve the quality of governance, but the competition for total control has not and is unlikely to produce such a ruler. The anarcho-capitalist position replaces the irrationality of policy making with private irrationality. Murphy summarizes the literature on policy where elite (and more rational) preferences seem to win in the status quo—a movement toward popular opinion would likely reduce this unplanned benefit of the status quo (p. 80). This leaves just Epistocracy and Futarchy as potential institutional changes. Epistocracy would move away from popular deliberation and toward experts, seeking to minimize the effect of “hooligans” on the political process (p. 79). Futarchy would harness prediction markets to eliminate irrational statements of cause and effect in the same way that stock markets discipline overconfident investors (p. 90).

The institutional reforms from chapter 6 are assumed to be impractical to implement, so this leaves the focus in chapter 7 on demand for irrationality. This is the most engaging chapter of the book. Using Robert Putnam’s distinction between bonding and bridging capital, Murphy’s presentation of a puzzle is fruitful. Bonding capital is likely to encourage ecological irrationality (p. 107). By contrast, bridging capital runs the risk of encouraging atomism (p. 104). This fundamental trade-off gives the tension that is needed to discuss optimization. In fitting with the book’s primary motivation, to discuss the rejection of markets, the author places the blame squarely on too much bonding capital. The solution, therefore, is to be more cosmopolitan and risk atomism. Murphy seems unworried about this latter extreme as he sees high levels of sociality surviving in the status quo. The tendency toward parochial groupings is greater in the absence of institutions that promote cosmopolitan ideals.

Chapters 8 and 9 continue to cast the cultural embrace of parochialism in a negative light. The discussion of social Luddism in chapter 9 is an exposition of a variety of beliefs about progress that seem to be indefensible with reasonable scrutiny. These examples are useful in clarifying what the demand for irrationality looks like, nicely summarized as “fooling people in the way they want to be fooled” (p. 140). Chapter 10 turns this same scrutiny on the experts. The chapter focuses on Philip Tetlock, William Easterly, and Roger Koppl, as well as Cass Sunstein and Richard Thaler. Murphy’s claim that we don’t want people to be fooled by charlatans is the basis of his call for policy reform, stating a general demand for hucksters by the public (p. 152). In a telling example, we are reminded of how unwilling even those in the medical profession are to present public scrutiny of facts or to comply with best practices like consistent handwashing (p. 148).

Perhaps the biggest omission in the book is a careful analysis of pluralism and its ability to address the problem of ecological irrationality. Irreducible competition between ecological groups suggests something like John Stuart Mill’s discussion of competing groups in On Liberty. Writers like Albert O. Hirshman might lend some insight here as well. In keeping with the public-choice theme, James M. Buchanan led substantial research on constitutional design as well as on the role of federalism as a check on groups at different levels. Other related ideas might help to explore institutional solutions to provide benefits from pluralism, like Bruno S. Frey and Reiner Eichenberger’s “functional overlapping competing jurisdictions” (“Competition among Jurisdictions: the Idea of FOCJ,” in Competition among Institutions, edited by Lüder Gerken [London: Palgrave Macmillan, 1995], 209–29).

The book is full of delightful gems of historical insight as well as appreciable humor drawing on the author’s experience. One easily imagines Cosmopolitan Conner and Bro Brad at a bar with Murphy, each being told to moderate their particular biases. Murphy’s prose is quite enjoyable to read. He has a command of a wide variety of ideas, and his presentation of them is so clear that you will know precisely where you stand with regard to their veracity.